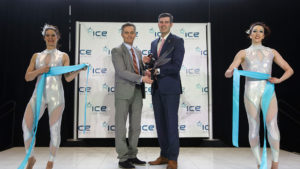 In only what can be described as ICE District fashion, the Edmonton Tower held a unique ribbon cutting ceremony announcing their official opening on Wednesday, February 22, 2017.

Complete with performers from the Firefly Theatre and Circus, and a replica ice sculpture of the stunning 27 storey building, Edmonton Tower enthusiastically opened its doors, becoming a dynamic member of Edmonton’s bustling downtown community.

“So far it’s been very positive for our team,” Mayor Iveson commented on the new facility that will house more than two-thirds of City of Edmonton staff.

In coherence with ICE District’s vision of connectivity and walkability, the Edmonton Tower is already connected to the current downtown pedway system. Plans are in place to further connect the tower — as ICE District continues to develop — with the JW Marriot Hotel, Stantec Tower and to Rogers Place through above-ground walkways.

“The opening of Edmonton Tower is a significant milestone for ICE District as the project continues its revitalization of downtown Edmonton.” 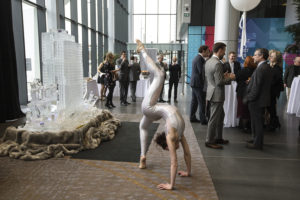 “It’s exciting. There’s no development like this in the world,” he added.

Representing yet another historic moment in the progress of ICE District’s construction, the Edmonton Tower is simply a taster of the many more exciting openings still to come.

The JW Marriot Hotel, including The Legends Private Residences, is anticipated to open in early 2019, followed later by the 66 storey Stantec Tower and the centrally located Public Plaza.

“We have been encouraged and humbled by the support shown by the people of Edmonton for ICE District and look forward to its continued contribution to the city’s growth,” added Scott.

To find out more about ICE District, please visit: IceDistrict.com