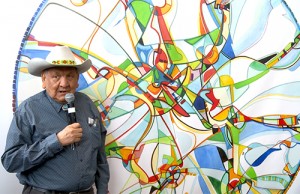 Alex Janvier reveals his artwork for the Winter Garden.

It has been more than a year since internationally-acclaimed artist Alex Janvier was selected as the signature artist for the Rogers Place Winter Garden.

Janvier’s painting, Tsątsąke k’e (Iron Foot Place), is being translated into a tile mosaic that will be installed in the floor of the Winter Garden. As the mosaic is quickly approaching its completion date, RogersPlace.com had the opportunity to sit down with Janvier and get a closer look at the inspiration behind his art.

Inside his personal gallery, which is nestled in the quiet woods north of Cold Lake, Alta., one is met by an immediate sense of serenity.

“This is pen and ink,” Janvier pointed out in a soft voice, as he led the camera crews through the gallery. Artwork scattered the white walls, bringing in considerable depth with the colourful, flowing shapes— forms often identified in his unique style of art.

After being seated at an oak table facing a wall of his own art, Janvier began to speak of his childhood and inspiration behind his work.

Janvier speaks with Jessica Kent inside his gallery near Cold Lake.

Born in 1935, Janvier is of Dene sųłı̨né and Saulteaux descent. He was sent to the Blue Quills Indian Residential School near St. Paul, Alta., before the age of eight, alongside his five-year-old sister.

Despite the great distress Janvier endured during his 11 years spent at the Residential School, he was able to seek comfort in — what has now become his greatest passion — art.

“At the Residential Schools, one of the best things that happened for me was that during the art period, I would lose myself,” Janvier stated.

“All the regulations and so on would fade for maybe an hour, an hour-and-a-half.” 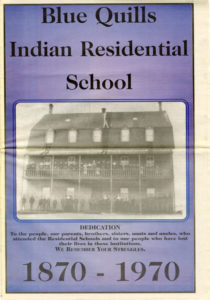 The Residential School System in Canada operated from approximately the 1880s until the late-20th century. This system forced young Canadian Indigenous children to attend Residential Schools with the goal to isolate them from their culture and heritage.

“I was so lonely, I would cry every night.”

Giving a detailed account of his experience as a child growing up in the Residential School System, Janvier recalled the feeling of isolation, “I was so lonely, I would cry every night.”

Though Janvier escaped his childhood pain through art, he says he continues to recover his “inner soul” by becoming lost in his creations.

Pursuing formal training in art, Janvier graduated with honours from Calgary’s Alberta College of Art in 1960. Following his graduation, he was quickly offered an opportunity to teach art at the University of Alberta.

“When you’re in art school you imagine one day you’ll succeed,” Janvier laughed.

Janvier continues to experience success with his artwork both locally and internationally. His work has been featured not only across Canada, but also in Paris. One of his largest pieces, titled “Morning Star,” is displayed at the Canadian Museum of Civilization in Gatineau, Que., and covers approximately 4,500 square feet.

Although he is recognized with great appraisal for his art today, that was not always the case for Janvier and a number of other individuals that began to express themselves creatively.

Sharing their experiences from the Residential Schools, through written pieces, artwork, and other forms, Janvier explained, “There were many other natives that started to come forward.”

“We were met with approval and disapproval,” Janvier said. “A lot of disapproval.”

Challenging this opposition, Janvier continued — and still continues — to share his story and pursue his passion for art.

“I’m pretty proud of what’s going on in my life now.”

Perhaps inspired by the isolation he endured as a child, Janvier’s artwork often reflects a sense of inclusion — integrating many bright colours, textures and shapes.

Photo by: Mosaika — the design and manufacturing company currently working on translating Janvier’s piece into the tile mosaic.

The pride and passion Janvier has in his work is just one of the many reasons he was selected as the signature artist for the Rogers Place Winter Garden.

“The whole thing is circular, coming, flowing in-and-out… it [the art work] would capture some of that hope [to come together].”

At approximately 45 feet in diameter, the circular mosaic will rest in the floor of the Winter Garden, and will be one of the first displays guests observe at the venue’s main entry point.

With colourful elements and textures, the mosaic not only intends to welcome fans and bring them together, it also holds significant meaning — hoping to stir conversations among the millions who will pass over it.

“All roads lead to the area, Edmonton, as it is a central destiny for all who came before and who came after.” 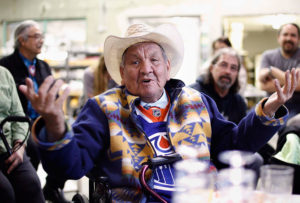 Janvier on a recent visit to see the progress of the mosaic. Photo by: Mosaika

“The painting pays respect to the land area where Edmonton is located, highlighting the colours of beautiful sky, the stories of the area and clear waters from far away mountains. All roads lead to the area, Edmonton, as it is a central destiny for all who came before and who came after,” Janvier explained.

Former Executive Director of the Edmonton Art Council, Paul Moulton, explained why it is significant to feature Janvier’s artwork inside the Winter Garden:

“I believe that Mr. Janvier, a world-renowned, respected Aboriginal artist, captures the spirit of the city, its history and its people. The richness of his vision in a venue of this scope symbolizes our shared journey, in a voice of hope and reconciliation.”

Mosaika is the design and manufacturing company that is currently working on translating Janvier’s piece into the tile mosaic, located in Montreal. Saskia Siebrand, the Co-founder and Artistic Director, commented after Janvier visited Montreal to share his story with the company: 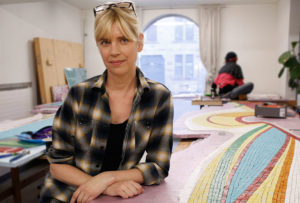 “It was really wonderful to have him here and to actually be able to tell us more about the whole meaning of it all and his inspirations.”

Mosaika has been working diligently over the past year to translate his art into thousands of tiny, coloured tiles, which are then carefully applied together to form the different shapes that make up the piece in its entirety.

Siebrand added, “To really hear his story, where it [the painting, Tsątsąke k’e] came from, it’s going to be just stunning to see it all come together on that scale.”

The installation of the art piece is expected to begin late next month. The public will have their first chance to see the artwork in person at the Rogers Place Open House on September 10.