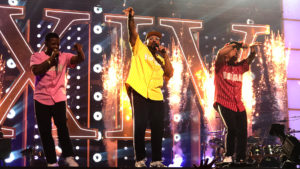 @BrunoMars off to a big start @RogersPlace in #yeg #24K pic.twitter.com/O2TOgkCQid

@brunomars phenomenal show tonight!! You sure do know how to get @RogersPlace bumpin’!!! ??????? #24kMagicWorldTourEdmonton

Bruno Mars is a great performer! Highly recommend seeing him if you get the chance! . . #brunomars #brunomars24kmagic #24k #rogersplace #yeg

Camila is killing it before Bruno Mars ??

thank u Edmonton #24KMagicWorldTour that was SO fun i lost a hoop. WORTH IT THO

First time here. Good to be back in #yeg you got quite the place here. @RogersPlace pic.twitter.com/cX7xLoZjBe
— Kirk Heuser (@TheKirkHeuser) August 1, 2017

This hit, that ice cold. Michelle Pfeiffer, that white gold.

This is how it starts… what a show! @BrunoMars @RogersPlace pic.twitter.com/5cCeKb9Ncd
— Focus Communications (@focuscom) August 1, 2017

And to relax tonight, @BrunoMars with my niece @RogersPlace. Ready for some serious groove! #yegdt pic.twitter.com/1aNLhewQWG

First time here. Good to be back in #yeg you got quite the place here. @RogersPlace pic.twitter.com/cX7xLoZjBe

Night two of the #24kMagicWorldTour is 100% smoother than a fresh jar of skippy! pic.twitter.com/o6bUkQSF95
— Rogers Place (@RogersPlace) August 1, 2017

Night 1 of the #24kMagicWorldTour at #RogersPlace kicked off with a bang! Read about the show in our Concert Recap: https://t.co/3aGj1SDUhV… pic.twitter.com/GP7FD8gMmM

@brunomars Been waiting 4 long years to see this with my Sissy! #24kmagicworldtour #rogersplace

Last Bruno Mars concert post… promise. It’s just that the #show was #sogood! I couldn’t decide between this song, Treasure, or Just The Way You Are. (Camera was shaky because I was trying to #dance) #yeg #edmonton #rogersplace #brunomars #concert #24kmagic #24kmagicworldtour #floorseats #somanyprettygirlsaroundmeandtheywakinuptherocket