Hometown Glory: Nickelback and Tate McRae to appear at the 2023 JUNO Awards in Edmonton, Alberta, live on CBC

Global superstar Simu Liu is back to host for the second year in a row, following his highly entertaining takeover in Toronto last May.

Nickelback to be inducted into the Canadian Music Hall of Fame, Presented by TD Bank Group, during a special presentation live on The JUNO Awards Broadcast

Tickets to The 2023 JUNO Awards, with performances by Nickelback and Tate McRae, go on sale to the general public November 18 at ticketmaster.ca/junos 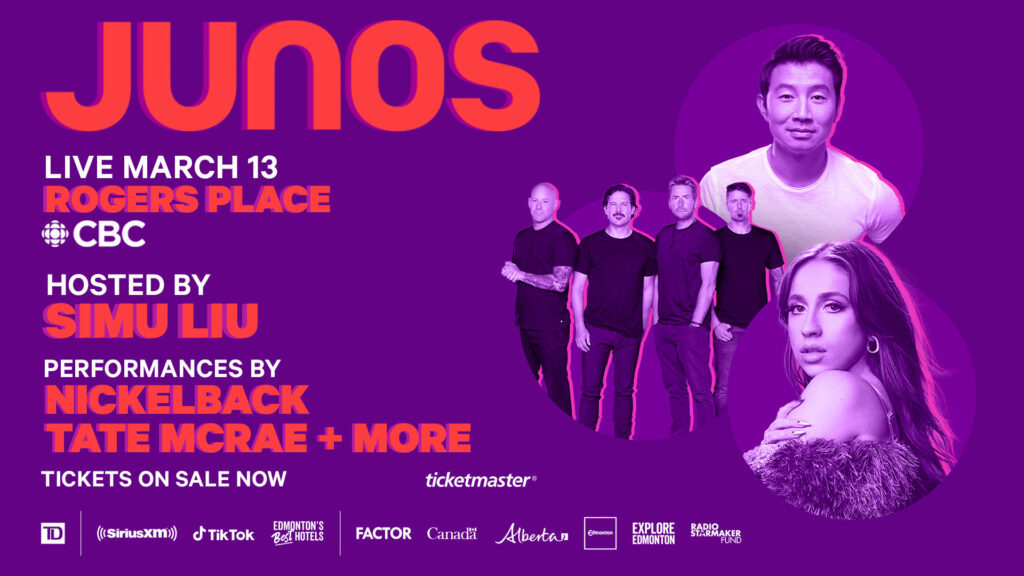 EDMONTON – The Canadian Academy of Recording Arts and Sciences (CARAS) revealed today during a press conference at Rogers Place in Edmonton, future home of the 2023 JUNO Awards, that Nickelback and Tate McRae will take the stage in their home province of Alberta when the show comes to town on Monday, March 13.

For the first time in 19 years, The JUNO Awards will return to the province’s capital city  for the 52nd iteration of the annual ceremony. The show produced by Insight Productions,  will broadcast and stream live across Canada at 8 p.m. ET/5 p.m. PT on CBC TV, CBC Gem, CBC Radio One, CBC Music, CBC Listen, and globally at CBCMusic.ca/junos and CBC Music’s Facebook, YouTube and Twitter pages.

“We are ecstatic for the JUNOS to be returning to Edmonton after nearly two decades,” said Councillor Tim Cartmell. “The festivities are a chance to celebrate the city’s vibrant music scene and the exceptional talent that calls the region home.”

“Year-after-year, it brings us great pride to see Canadian talent come together for JUNO Week and this year’s festivities in Edmonton will be no exception,” said Allan Reid, President & CEO, CARAS/The JUNO Awards. “We can’t wait to show you what else we have brewing in the weeks and months to come.”

“Albertans are proud Canadians and we want to showcase our beautiful province and culture to Canada and the rest of the world,” said Nate Glubish, Minister of Technology and Innovation, and MLA for Strathcona – Sherwood Park. “That is why Alberta’s government is supporting our music industry and economy by helping bring the 2023 JUNO Awards to Edmonton. Hosting the JUNO Awards in Edmonton will highlight Alberta’s vibrant culture and thriving music industry to the world by celebrating the arts and the artists who dedicate their skills and talent to making world-class music.”

Globally renowned rock act Nickelback were unveiled today as the recipient of this year’s prestigious Canadian Music Hall of Fame honour, presented by the JUNOS’ Premier Sponsor, TD. A true testament to the music, talent and culture coming out of Alberta, the Hanna-raised, 12-time JUNO Award winners will be inducted into the Canadian Music Hall of Fame live on the Broadcast at Rogers Place during a special performance reflecting on their 20+ year career in music. One of the top-selling acts of all time, the band’s continuously growing list of achievements includes more than 10 billion streams, 50 million albums sold worldwide, 12 consecutive sold out tours and countless chart-topping hits including “How You Remind Me,” “Photograph” and “Rockstar.” They were also the second best-selling foreign act of the 2000’s in the U.S., behind only The Beatles. Nickelback will debut their long-awaited tenth studio album, titled Get Rollin’ on November 18, 2022.

Nickelback’s performance on the Broadcast will be their sixth time playing on the show, having previously taken the stage in Newfoundland (2002), Edmonton (2004), Halifax (2006), Vancouver (2009) and Ottawa (2012). More information on Nickelback’s involvement at this year’s show can be found here.

Also performing on the Rogers Place stage will be Calgary native and four-time JUNO nominee, Tate McRae. With over 4.7 billion streams, 765 million video views, a #1 Top 40 hit and multiple #1 Dance hits, McRae has amassed major commercial success globally in only a few short years, with top-tier talent like Charlie Puth, Finneas and Greg Kurstin on her list of collaborators. She was heralded as the youngest musical artist to ever be included in Forbes’ 30 Under 30 list in 2021 at the young age of 18 and was previously nominated for a People’s Choice Award, three 2022 iHeartRadio Music Awards, and a 2022 Billboard Music Award.

Also announced today was the recipient of next year’s Walt Grealis Special Achievement Award, renowned country music manager and promoter, Ron Sakamoto. With more than five decades of industry experience under his belt, Ron is being recognized for his significant contributions to music and the artists who create it, both nationally and globally.  Born and raised in Coaldale, Alberta, his lasting career has earned him close to 50 national and international accolades, including Talent Buyer or Promoter of the Year’ Award from the Canadian Country Music Awards for 17 consecutive years. A longtime collaborator of Canadian superstar Shania Twain, having brought to life her first world tour, “The Come on Over Tour” in 1998, Ron has represented some of the biggest names in music, including The Guess Who, Bryan Adams, Bee Gees, KISS, Keith Urban and more. Most recently, Ron and his company the Sakamoto Agency launched Sakamoto Music – a country music-focused label distributed by Warner Music that is designed to help foster the next generation of Canadian talent.

From Thursday, March 9 through Monday, March 13, 2023, the city of Edmonton will come alive with JUNO Week programming, marked by the return of signature events such as:

JUNOfest Presented by CBC Music is also taking to the streets during JUNO Weekend. The three-day music festival will fill more than 10 venues across the city with local musical talent and 2023 JUNO Award nominees.

Tickets for The 2023 JUNO Awards start at $49.00 (including tax plus fees) and are available for purchase at www.ticketmaster.ca/junos.

Book your stay for 2023 JUNO Week through Edmonton’s Best Hotels – Rewards with every booking  www.edmontonsbesthotels.com.