At first meeting, Nitro Circus athlete Bruce Cook’s humorous, humble and ‘Never Say Can’t’ attitude comes on display when asked how his life changed in January of 2014 following a dramatic crash attempting the first-ever double frontflip on a dirt bike that left him paralyzed from the waist down.

“I’ve always kind of been mentally strong with these types of things, but anyone who’s taking a 250-pound dirt bike off a ramp and flying 40-feet into the air has to be – or stupid – in one way or another,” Cook said via Skype to RogersPlace.com.

For most people, losing the ability to walk following an attempt at a world record would ward off any further attempts.

But Bruce Cook and the rest of his Nitro Circus companions aren’t ‘most people’.

The 30-year-old from Toronto, Ont. defied the odds only 10 months after his accident by becoming the first paraplegic athlete to backflip a dirt bike in front of family, friends and thousands of screaming fans. More than four years onward, he’s toured the world and done over 100 shows across North America, Europe and Australia living life to the fullest and enjoying every moment knowing very well that day could’ve been his last on a bike.

Both Cook and dozens of fellow adrenaline junkies ride into Rogers Place later this year on Sunday, October 7 as part of the Nitro Circus You Got This 2018 tour of North America, bringing an extreme and dangerous brand of entertainment that the thrill-seeking entertainers balance every show. No matter how many times they’re able to practice, there’s always the slim possibility that things can go literally, and figuratively, sideways – even more so when attempting a world-first.

“It’s always kind of in the back of your mind,” Cook said. “We’ve lost friends in the sport, so with these world firsts you don’t really know how they’re going to go, honestly. You can’t look at videos and see how the landing was when it hasn’t been done yet, so there’s always elevated risks with things like these.

“If I came away from it with a broken arm or broken leg, it might’ve still been considered a success.”

After months of preparing for the jump during his Nitro Circus debut, Cook misjudged his landing and crashed hard on the ramp despite completing the two frontflips. The impact caused him to bend backwards despite landing on his feet, leading to a broken T11 vertebrae in his spine. Despite emergency surgery, doctors informed Cook he was paralyzed from the waist down and would have to deal with the sobering reality of being confined to a wheelchair.

“It’s the scariest thing that has ever happened to me,” Cook admitted. “Not being able to feel my legs was a terrible feeling, but I was alive.” 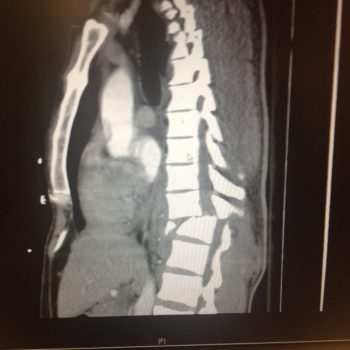 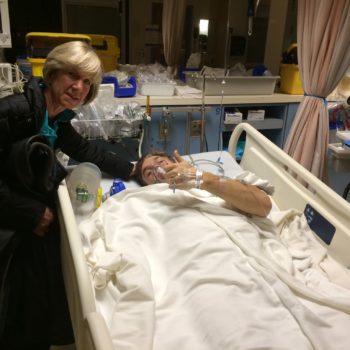 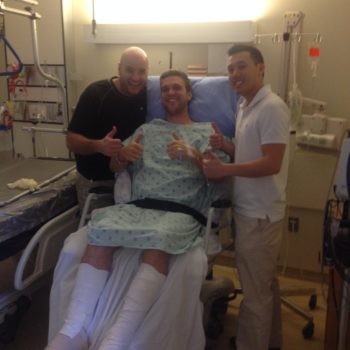 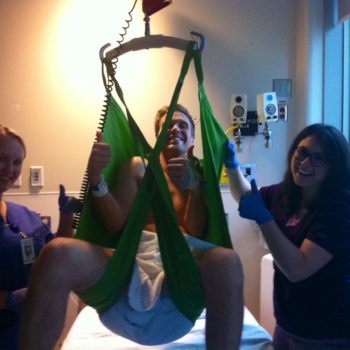 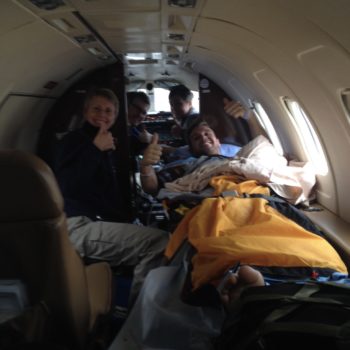 What followed for Cook was 66 days of intensive care in the hospital and an even longer recovery process, coupled with the uncertainty of not knowing if he’d be able to ride again. But as is customary for the adrenaline junkies who entertain others by throwing themselves off jumps on dirt bikes, quads, skateboards or scooters – the drive to thrill is an obsession.

“Spending that time in the hospital there were people in a lot worse situations than me and they still had smiles on their faces,” Cook said. “If they have that kind of attitude after their experiences, what do I have to complain about?”

There was only ever one goal in mind.

“I wanted to get back on the bike in less than a year,” Cook said. “I didn’t really tell anyone, but my ultimate goal was to do the backflip and get back in front of a crowd again.”

Having to make adjustments to his bike to accommodate his disability meant that cook would have to be strapped to the bike by a seatbelt, making riding and the jump much more dangerous.

If that doesn’t embody the spirit of Nitro Circus and extreme sports, we don’t know what will.

“Normally you got the worst-case scenario of bailing off the bike and getting away from it, so I have to be that much more dialed in and practice more to get close to the 100 per cent success ratio,” Cook added. “I’m at about 99 per cent. We kind of nailed the design and that first ride was definitely a weight off my shoulders.”

A month after riding for the first time with his new set-up, Cook defied expectations to become the first paraplegic to backflip a motorbike in front of a screaming Air Canada Centre filled with family & friends in his hometown of Toronto.

“The reaction I got from all over the world from people saying I inspired them to come back from injury or try a little harder was overwhelming,” said Cook. “Growing up with my parents and grandpa driving that ‘Never Say Can’t’ attitude into my head definitely helped.

“Since the injury I think even more so about how much we take for granted and how much worse it could’ve been.”

After a winter off spent in Kelowna, B.C., Cook is meeting back up with Nitro Circus this month for their North American tour, stopping in Rogers Place on Sunday, October 7. Fans interested in seeing Bruce and the high-flying Nitro Circus squad can pick up tickets to the event here.

“It’s a group of extremely talented athletes in motocross, BMX, scooters, in-line skates and contraptions,” said Cook. “Kayak, hospital gurney, shopping cart, kids tricycles – basically anything we can put wheels on and send down a ramp and off a jump, we’ll do it. They’re back-flipping and double back-flipping these things, so it’s not like we’re just launching them off a ramp.

“It’s a combination of extremely talented and extremely stupid, so it makes for a pretty good show.”