A castle built for Kings

This Saturday will mark the first time in modern franchise history that the Oil Kings will play in front of a sold-out home crowd.

As the first inaugural hockey game at Rogers Place, the Oil Kings will take on the Red Deer Rebels in their Home Opener on Saturday, September 24, with more than 18,000 fans cheering them on.

But besides a packed arena cheering them on, there is something else giving the team an extra push for success — the locker room.

“Everything they need to perform to their absolute maximum is available to them here.”

With a new, inviting locker room for the players — equipped with a weight, training and treatment room— Oil Kings staff joke that it is hard to get the players to want to leave.

“Everything they need to perform to their absolute maximum is available to them here,” said Brian Cheeseman, Athletic Therapist for the Oil Kings. 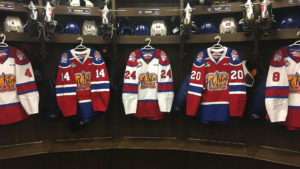 A photo of the new Oil Kings dressing room inside Rogers Place.

The first thing you see when you enter the Oil Kings locker room is the stick wall, which takes on a slight curve, playing off of the exterior shape of the dressing room.

The equipment room, which is located near the entrance to the locker room for easy access, provides a functional space for skate sharpening, repairs, equipment fitting and more.

Cheeseman added, “It’s their one-stop-shop for all their equipment needs.”

Moving further into the locker room from the equipment room, you will find what the Oil Kings refer to as their “family space.” This area is a social environment for players to talk strategy, eat and bond.

One of the most significant and sentimental features of this space is the Kristains Pelss jersey and plaque mounted on the wall.

“This is a very important piece to the Oil Kings family,” said Cheeseman.

“Kristians was a very important player on our squad in the 2012 WHL Championship and Memorial Cup year.”

Pelss, an Edmonton Oilers prospect, lost his life in an unexpected and tragic accident in the summer of 2013 in his home country of Latvia.

“This is our way of honouring him and keeping his legacy alive.”

Behind this space is the Oil Kings weight room and treatment area.

“It will give us that extra boost.”

As the Athletic Therapist, Cheeseman discusses the importance of both the functionality and safety by having these two spaces in close proximity — where he is able to ensure the young players are using the proper techniques while exercising.

“Probably the biggest addition to our space here at Rogers Place is our own weight room,” he added.

“We have all these tools now. It’s just a matter of using them in the right way, and making sure it translates from what we do in here to what we do on the ice.”

Keeping with the themes of functionality and ‘family,’ the Oil Kings dressing room models a horseshoe shape, similar to that of the Oilers dressing room. This design allows for every corner — or lack there of — to be seen, fortifying a close team bond. 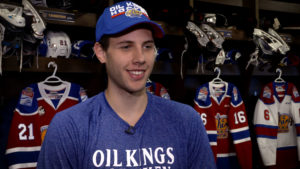 “I’m honestly very honoured to be in a room like this,” said Oil Kings forward Tyler Robertson while standing in front of his stall inside the dressing room.

Starting his fourth and final season with the Oil Kings, Robertson is excited to have the opportunity to play inside the new arena.

“It makes it more special that I’m from here,” said the Sherwood Park native.

“It gives you that extra motivation to do well everyday and put your best effort in,” he added.

For tickets to see the Oil Kings play at Rogers Place, visit www.OilKings.ca.