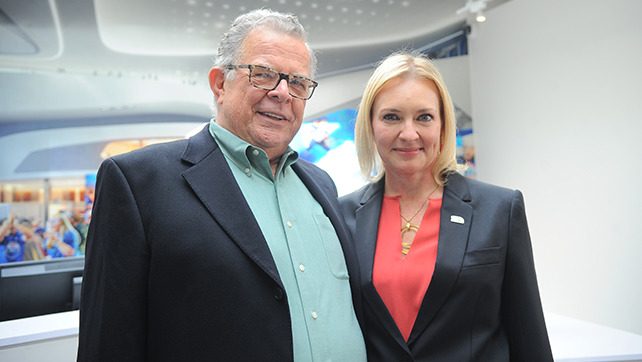 When Northlands Coliseum opened its doors on November 10, 1974, very few could have predicted what the “Magnificent New Coliseum” would have in store for both the players that left their heart and soul on the ice night in and night out, and for the passionate fans that cheered them on, witnessing history in the making.

If you were to turn to the fans beside you or ask your co-workers over lunch what their favourite memory was over the years, you’d be hard pressed to get the same answer twice. 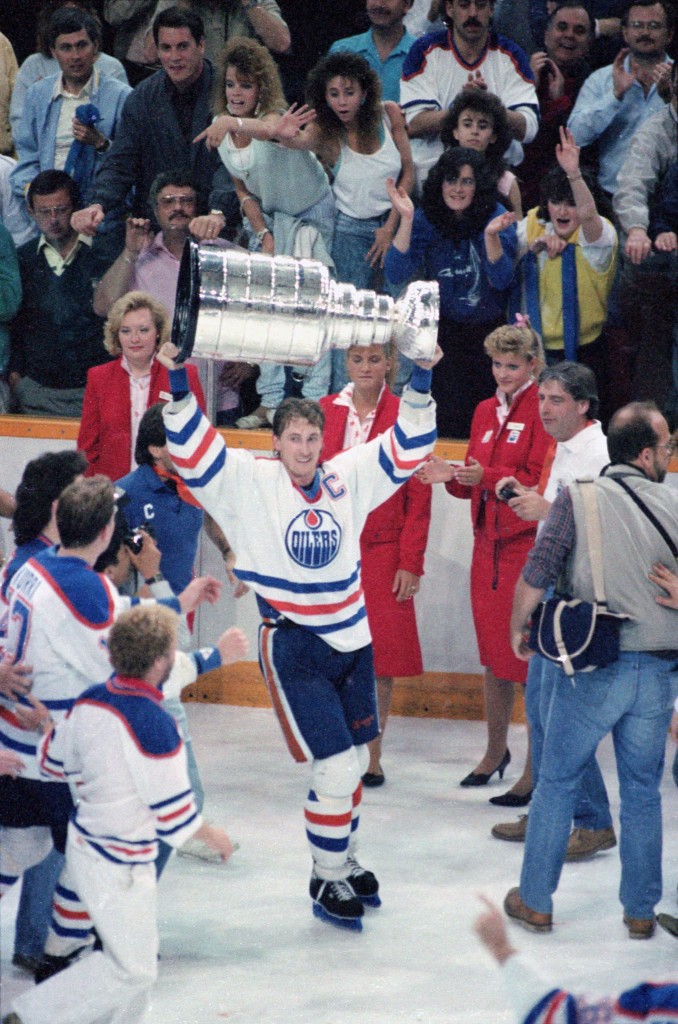 Wayne Gretzky hoists the 1987 Stanley Cup as Susan Darrington and a few other usherette’s look on. Photo by Getty Images.

For Susan Darrington, it was the 1987 Stanley Cup Final where she had the privilege of standing on ice as the ‘Great One’ lifted the Cup above his head. An usherette on and off for four years, Darrington even skipped her high school graduation party to celebrate with the championship team.

“It was either go to my graduation party or stay and go to the Oilers Stanley Cup party, so that was not a tough call,” said Darrington.
But like a true teenager, “she didn’t tell her parents that,” joked her dad, Neil Campbell.

Darrington left Edmonton shortly after the ’87 Cup win but she wasn’t quite done with the city just yet, returning in August 2015 as Vice President and General Manager of Rogers Place. In her new role, Susan is responsible for overseeing the overall management and day-to-day operations during the pre and post-opening periods, and bringing the venue to life – something Campbell knows a thing or two about.

A member of the Edmonton Exhibition Association, Neil was part of the management team that opened Northlands Coliseum 42 years ago. It was a massive jump for the World Hockey Association (WHA) Oilers who were moving from the Edmonton Gardens, which sat 5,200, to the Coliseum which was over three times the size.

“It was something very different for the city,” said Campbell. “It took off; I think it exceeded everyone’s expectations. People didn’t really expect that the Oilers would draw 15,000 plus fans for every game and that every time there wasn’t a hockey game going on, somebody wanted to put a concert on.”

Back in those days, Campbell noted that instead of being departmentalized, everyone on their small, but efficient team had a hand in the business operations, from ice plant maintenance and marketing right down to the ticket sales and concessions.

While Susan’s team is a lot more robust as customer experience and technology have significantly improved, she still faces the same issues and opportunities her dad faced at the Coliseum when it comes to filling the seats for more than just hockey.

“I think from an operating model the business is more defined now so it’s not having to sort it out as much as it would have been when they opened up Northlands, but for us it’s absolutely trying to understand how we’ll be able to drive this building and all the different events we’ll be able to put through it; how we’ll be able to bring in music and community events and create a great experience for Edmonton outside of hockey,” said Darrington.

It’s a big job, but she’s more than up for the task.

Susan’s passion for venue management can be traced all the way back to her parents’ kitchen where she grew up listening to Neil’s stories around the dinner table. And while she may not have known just yet that she would follow in her dad’s footsteps, she certainly soaked it all in.

“That’s what we talked about. Neil talked about work and so I think I was lucky when I was young to have an understanding of how a facility worked. I didn’t really know that I knew all that and so I started to get into the business and I’d sit in meetings and I’d be thinking at the level he operated at, and that has served me really well in my career.

“It turned out to be a natural fit. It was a great road for me and I was lucky that I had been exposed to it early.”

While there’s no doubt Neil acted as a catalyst for her knowledge and passion for the facility business, he was very quick to point out that everything Susan has accomplished, she has done on her own merit.

“A lot of people have the mistaken idea that I opened a lot of doors, or even some doors, for Susan and that’s certainly not true,” said Campbell. “I think the only door I opened for her was to get her an interview for the usherette job and told her at the time that I got the interview for her but the rest was up to her.”

Following Northlands, Neil went to Commonwealth Stadium for three years before moving to Seattle, Washington to take over as Director of Stadium Administration at the Kingdome – home to the Major League Baseball’s (MLB) Seattle Mariners before Safeco Field was built in 1999. Susan stayed in Edmonton to finish high school but joined her family shortly after, attending Western Washington University, Bellingham where she earned her Bachelor of Arts in Human Services Management.

“She stayed pretty close within the facility business,” said Campbell.

“One summer she worked for Alvin Shandro at Western Food Services and was in charge of catering and a few other things at baseball games in Vancouver. Then after she graduated she took the position at the convention centre in Seattle, which was right up her ally because of what she had done with Northlands much earlier.”

It was at this point that Susan would get her first big taste of the intricacies of operating a new facility. Susan was hired as Vice President of Facility Operations and Services for First & Goal Inc., operators of the 68,000-seat CenturyLink Field – home to the National Football League’s (NFL) Seattle Seahawks and Major League Soccer’s (MLS) Seattle Sounders. She helped launch the new facility and oversaw all aspects of operations that included stadium expansion, facility use guidelines and venue operations for Seahawks and Sounders games.

In addition to facility operations, Susan also worked with the entertainment industry’s top promoters to book world-class performers and speakers, such as the Dalai Lama, U.S. President Barack Obama, U2 and Kenny Chesney.

While Susan was just dipping her toes in the waters of venue management, Campbell was winding down his career across the street as Vice President of Operations at Safeco Field. Opening just three years prior to CenturyLink Field, the two facilities both bid on the city’s top events when their respective teams weren’t playing. But rather than calling themselves competitors, Neil and Susan preferred to look at themselves as colleagues. 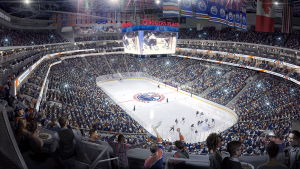 A rendering of the inside of Rogers Place.

“While we were competitors in some respects, we were honest people and not trying to do anything underhanded and we both got our fair share of other events,” said Campbell. “I would throw out some ideas and she would maybe take some or not, just as she would throw some things my direction.

“Interestingly a lot of people at that time didn’t even know that we were related so she did a good job, I think I did a good job. I retired, she went to Brazil and after that she landed right where she belongs with the Oilers in Edmonton.”

A big step from Seattle, Darrington took on the role of General Manager of Allianz Parque in 2012, South America’s first multi-use stadium in São Paulo, Brazil. The venue saw more than 170,000 guests in the first 20 days of operation and was nominated for New Stadium of the Year at the International Stadium Business Awards in Barcelona.

In addition to opening the facility, she was responsible for raising revenue for Allianz Parque, with the initial goal of attracting about 300 events per year. After three years in Brazil, and with a wealth of international experience under her belt, an enticing offer from Oilers Entertainment Group (OEG) eventually led her back home.

“We did a worldwide search for this position,” said Bob Nicholson, OEG CEO and Vice Chair. “It was such a big position to add to our team, we didn’t realize the ties back to Edmonton when we started to have the conversations with Susan, but her resume is, what we feel, as good as there is in the business.”

For Susan, there’s not a day that goes by without thinking back to her days as an usherette at the Coliseum.

“I think first of all, it’s totally a dream come true to be back in Edmonton and work for the Oilers,” she said. “There’s not one single day that I don’t think about that and realize how privileged I am to walk into the middle of such an amazing project.

“On top of that, with the other things I’ve done in Seattle and in Brazil, the scope of those were never, ever the scope of this because right now we’re opening an arena in the middle of a construction project that will be ongoing for the next three years. So while we’re opening the arena, we’re continuing to plan and develop strategic opportunities down the road in the middle of construction.”

With Darrington at the helm, Rogers Place will soon welcome NHL and WHL hockey along with a plethora of world-class concerts and events – just as Northlands Coliseum and Campbell did 42 years prior. And while Neil now enjoys his much-deserved retirement as a snowbird in Phoenix, he booked two special flights back to Edmonton; the first to celebrate and reminisce alongside Darrington as the Oilers played their final game at Rexall Place and the second to cheer on her accomplishments as Rogers Place opens its doors and welcomes a whole new era of history-making events in the heart of Edmonton.