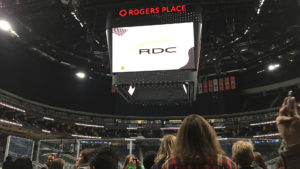 Christmas came early for some Red Deer College (RDC) students last month when they were invited to see behind the scenes of one of the newest live entertainment venues in the world.

On December 8, dozens of RDC Theatre Production students got to see and experience first-hand what it would be like to work back-of-house at Rogers Place.

“It’s something I could see myself doing in the future,” said RDC student Lowen Carlson. “I’m interested in rigging and lighting. I really enjoy just how everything comes together.”

Rogers Place Events Manager Andrea Carroll Papirny led the students through the different technical areas of the building with a focus on audio, video, lighting and conversion features (converting the venue from a rink to a stage, and back again).

“They are not going to have the opportunity to see that anywhere else in the world.”

“A lot of the technology we have in the building is state-of-the-art,” said Papirny. “They are not going to have the opportunity to see that anywhere else in the world.”

RDC Arts Centre Technical Rick Knievel agreed, “It’s the newest and best out there and to have it here in Alberta is amazing.” 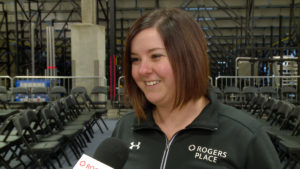 Rogers Place Event Manager Andrea Carroll Papirny is one of the hundreds of staff involved from a venue operations standpoint at Rogers Place.

Graduating as a Theatre Production student herself, Papirny was eager to show the students how they can apply their skillset inside an arena setting.

For those with a desire to work as a theatre technician, Papirny argues that a venue like Rogers Place is the be-all-end-all.

“This is the goal. This is where you want to end up if you’re in any kind of theatre program,” said Papirny.

With averages of between 100 to 200 people involved in the venue operation — from conversions to engineering, mechanical and retail — there is an extensive amount of work that goes on behind the scenes that fans may not be aware of.

“There is a lot more to it than what you see on the ice,” grinned Papirny.

Due in large part to the advanced technological offerings at Rogers Place, the new building has also been making a name for itself among the live entertainment community.

“There’s an appetite here for all the shows we’re bringing into town,” said Papirny. “It’s a diverse group of concerts that are coming to this venue and selling out night-after-night.”

“We’re really doing well and a lot of the promoters are taking notice.”

Selling out back-to-back nights of Drake in September, leading the way with the single-show attendance record for Toruk — The First Flight, and with Garth Brooks shattering his Edmonton sales record with nine shows announced for February, Rogers Place has quickly become a fierce competitor in customarily larger markets. 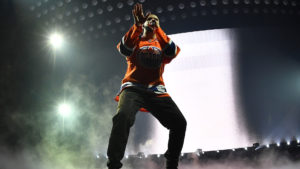 “We’re competing against Vancouver and Toronto in the number of shows we are getting and the number of people coming to our shows. We’re really doing well and a lot of the promoters are taking notice,” said Papirny.

Drawing not only the best in the business for the technical side of the building’s operations, but attracting some of the most highly sought after shows and events to offer fans, Rogers Place is distinguishing itself as a leader in offering world-class experiences in sports and entertainment.

For those interested in career opportunities at Rogers Place, visit: www.RogersPlace.com/careers