Being together never gets old

Every now and then, going out on a limb and making a proclamation can be daring, perhaps even presumptuous and unfounded.

Although, I think it’s safe to proudly state the following:

ICE District has the largest rumpus room in Oil Country.

Remember when we were kids, inviting our friends over to watch a hockey game in the basement? We’d answer the doorbell, exchange pleasantries, have other family members say hello and then lead them to the basement door. We’d rub our hands together with glee in anticipation, and excitedly belt out in unison “This is going to be a great game!”

We’d turn on the television, and for some of us, we’re mature enough to remember pulling out the switch, seeing a small dot that expanded larger and larger over a few seconds until the picture was on our black and white television screen.

Color and high definition? It didn’t really matter. The excitement of the game was all we cared about.

We’d take our positions at our favourite seats, grab a refreshment from the fridge just off to the side of the rumpus room and then hunker down for the big game.

When our team scored, we’d yell and scream and jump up and down. When we were scored on, we’d bury our heads in our hands and look towards the carpet — sometimes fearing the worst—while in other circumstances we were convinced that, yes … we can win.

At the end of the game, we’d celebrate if we won and console one another if we lost.

In the end, honestly, winning or losing was secondary to what really mattered most.

Being together. That’s what really mattered – to experience a big hockey game together as buddies, or as a family.

Technology has progressed significantly since those black and white television sets. But the feeling of being together never gets old.

We’re going to experience it again Friday night at the Orange Crush Watch Party when the Edmonton Oilers meet the Anaheim Ducks in Game 2 of the Western Conference semi-final of the Stanley Cup Playoffs at Rogers Place in downtown Edmonton.

Since the Oilers skated into the playoffs a few weeks ago, fans have congregated at Rogers Place to watch away games on the scoreboard, with the biggest, sharpest, clearest picture in North America.

Families have enjoyed the watch parties including grandparents, parents and, of course, children. In fact, one nine-week-old baby girl dressed in an Oilers jersey was seen near the 104 Ave entrance. 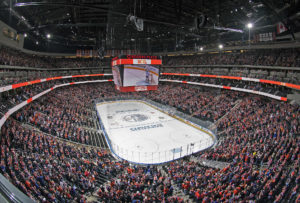 You can’t watch a hockey game — let alone a playoff game — without snacks and beverages. The watch parties have that covered too.

And just when you think things can’t get any better, they do: net proceeds from each $5 ticket goes to the Edmonton Oilers Community Foundation (EOCF) which funds countless charities across Oil Country.

There’s even a 50-50 draw which benefits the EOCF and minor hockey groups in Oil Country.

So, ponder this for a moment: an Oilers playoff game on the NHL’s largest true high-definition scoreboard and game day refreshments.

Weren’t able to snag tickets to the rumpus room – the Watch Party at Rogers Place? Molson Hockey House will also be open for those 18+ or bring your whole family down to Ford Hall to watch the game on the giant LED screen. Click HERE for more details.