For a rocker who rose to stardom nearly four decades ago, Bryan Adams still knows how to pack an arena. The Ontario native played hit after hit to a full house at Rogers Place on June 8, and the crowd wasn’t shy about proving that they still know the lyrics to those songs that infiltrated the airwaves all those years ago. The crowd at Rogers Place included everyone from Baby Boomers to Millennials, showing Adams’ sound is classic and ageless.

Adams kicked off “The Ultimate Tour” with his new single “Ultimate Love,” which was released in 2017, then went right to a hit from the early 90s, “Can’t Stop This Thing We Started,” which was welcomed with roaring applause from the audience. The hit-maker displayed timeless vocals and musicality as he sang and played guitar alongside his four-piece band. 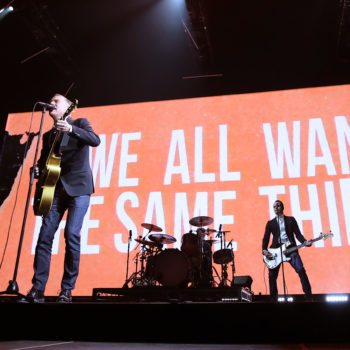 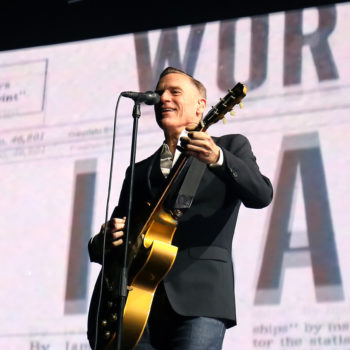 “Edmonton what’s up!” Adams yelled out to the crowd. “My name is Bryan, and I’ve been coming to this town for a really long time.” He went on to tell a story about how our very own city influenced his career. “In fact on the way in here tonight I was trying to remember one of the places I played here, it was club outside of town – I think it was called the [Riv Rock Room at the Riviera Hotel] … a proper s*** hole,” he said laughing with the crowd. “But it was interesting because, I was a young song writer and I just felt honoured to be in the room, and I ran into Mick Jones from Foreigner, and he said, ‘Hey you wrote songs for my friend Ian [McDonald]’, and a few months later they asked me and my band to go on tour with them!”

“So even if it wasn’t the greatest place to play at the time, I have fond memories because it was right here in this town we saw the beginning of it escalate!” he explained.

It’s no surprise he went on to become one of the world’s most successful and recognizable singer and songwriters. Adams is not only a natural talent, he is an exceptional performer and looked like he was genuinely having the best time on stage; he kept the audience excited and begging for more. To start both mega-hits “Heaven” and “Summer of ’69,” Adams held his mic out to the crowd and the whole arena sang every single word; he didn’t join in until the second verses. Both songs were released in 1984 – 34 years ago – but his voice sounded just as smooth as the day he recorded them. It was comforting hearing melodies that sounded like memories. For Adams the theme of the show was “go down rocking!”

His energy was absolutely incredible – he was playful, funny and very interactive. “Let’s turn on the lights, I want to get a good look at all of you,” he said as he started reading posters from fans. One asked for a birthday selfie, and he delivered, bringing twins up on stage for a quick photo.

His second last song was “Straight from the Heart,” a song he wrote when he was a budding musician at just 18 – he dedicated it to his 90-year-old mother, Jane.

In his career, the now 58-year-old has released 13 studio albums, five live albums and six compilation albums, including his most recent Ultimate Love. Tonight’s show was just a snapshot of a wildly successful career, playing 28 songs with enough vim and vigor that proved he really is “18 ‘til he dies.”