Rogers Place is LEEDing the way in environmental achievement.

A new milestone has officially been reached as the City of Edmonton and Oilers Entertainment Group (OEG) announced Wednesday the new arena received LEED Silver Certification.

“It’s a very high bar and certainly an accomplishment,” said Ian O’Donnell, Executive Director of Edmonton’s Downtown Business Association. “It [commends] the leadership of [OEG] and the City of Edmonton and the Katz Group to ensure that when we build and design, that we are doing it in a sustainable way.”

LEED — Leadership in Energy and Environmental Design — is the most widely used green building rating system in the world. Its assessment focuses on site development, water efficiency, energy efficiency, material selection, indoor air quality and innovation in design, and it provides a framework to create healthy, highly efficient and cost-saving green buildings.

“LEED has been around for quite some time now and…it’s certainly a bar that should be met and is aspirational in some ways,” said O’Donnell. “Fundamentally, it is at the core of how we should be designing moving forward.”

The City of Edmonton has a sustainable building policy that mandates the construction of all new buildings to strive for LEED Silver certification as a minimum requirement. Since 2008, all new city-owned buildings and major renovations have been designed to meet this standard and be formally certified through this program.

“This has been something that was contemplated from the very beginning of building Rogers Place,” said Susan Darrington, Executive Vice President and General Manager for Rogers Place.

“That means that during the construction process, green building procedures were implemented, including: connecting the building to downtown, walkways around the facility, transit infrastructure and then also how we disposed of the construction materials.”

Rogers Place, in the heart of downtown Edmonton, is the first NHL facility in Canada built to the LEED Silver certification requirements.

“This building is a standout in Edmonton’s landscape and a key gathering place for our community,” said Councilor Bev Esslinger.

“By committing to environmental responsibility and day to day operations, [OEG] has now taken an active role in making Edmonton a better place and acting as a role model for other large organizations.”

According to Esslinger, during construction, PCL successfully diverted 89.3 per cent of waste from the landfill so it could be reused or recycled. 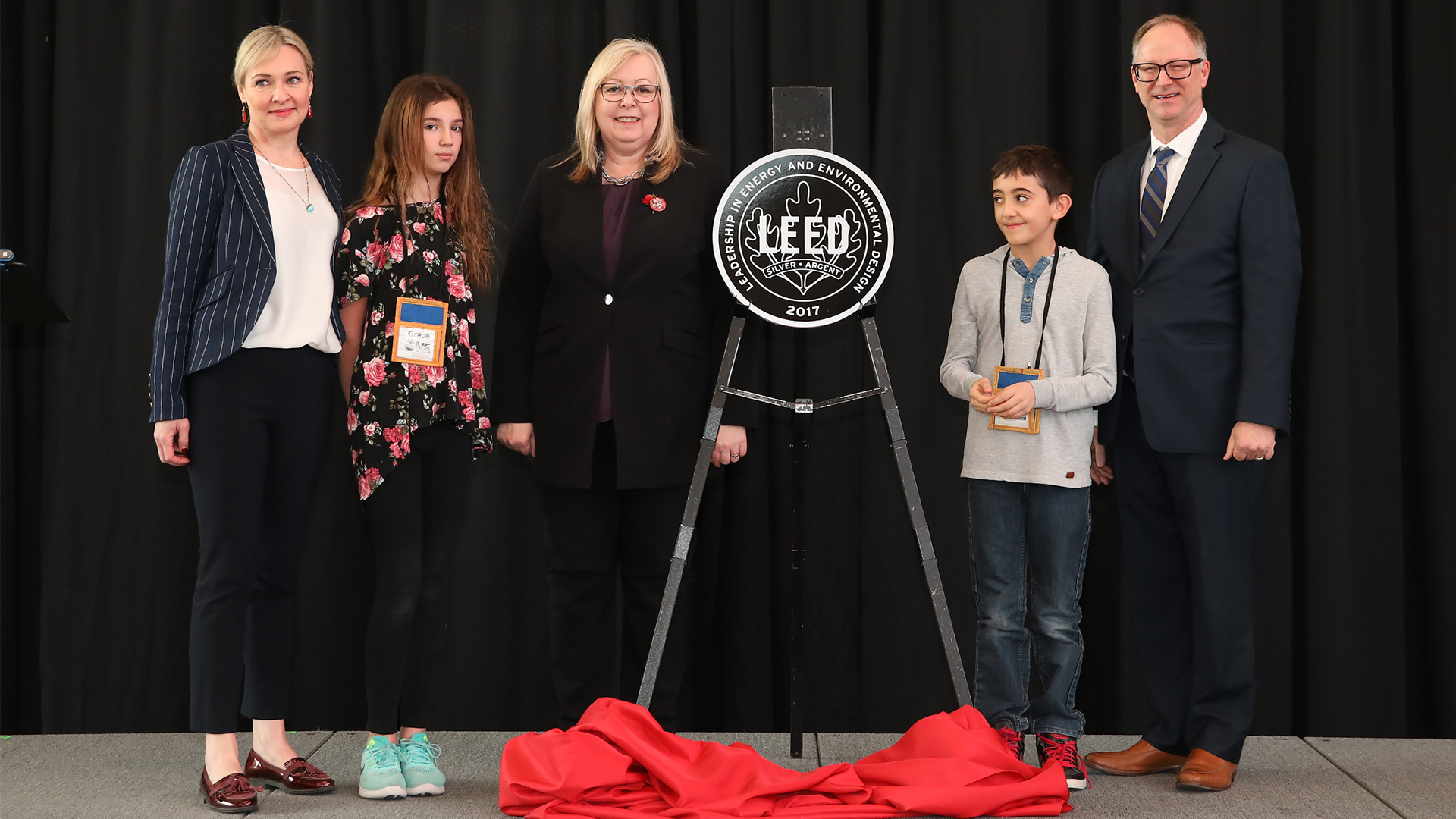 In addition, the building features low-flow plumbing fixtures and has incorporated green cleaning and an improved processing of food waste to help cut down the building’s water and waste use. The arena’s commitment to reduce the buildings environmental impact even continues into the operations of the facility.

“When we started designing how we would operate, it was always with an eye to being part of the Green Sports Alliance and making sure Rogers Place was a sustainable building,” said Darrington.

The NHL Rock and Wrap It Up! program, which was implemented across the League in 2010, is one such example. It inspires sports and entertainment venues to freeze and donate any excess food prepared but not served by the facility to food banks — food that may have otherwise ended up in a landfill. Rogers Place collects prepared but unserved food every couple months and donates it to Edmonton’s Food Bank.

As a result, the program plays a substantial role in the sustainability and Green initiatives that were established during the construction of the arena, something that Darrington continues to maintain in the operations of the facility.

“We received this incredibly beautiful building and we want to be good stewards of that,” said Darrington.

“From day one, we received plumbing fixtures that reused 35 per cent less water, we’ve done the same thing with energy. We’ve set a baseline and we’re working really aggressively to manage our energy consumption. In our initial year of operations, [over 90] per cent of the waste was diverted from landfill.”

Esslinger explained that the City of Edmonton set the standard for new and renovated buildings in the city because the belief is that there is a collective responsibility to reduce Edmonton’s carbon footprint.

From homeowners to small businesses to governments to large corporations, each one should find a way to contribute to make the city a healthy and livable place, not only for today but for future generations to come.

“[This certification is] important because it shows that there was a real commitment during the [planning] process to ensure that Edmonton had great sustainable practices and that the building didn’t put more of a burden on the neighbourhood than it needed to,” said Darrington.

“It meant that when we opened the doors to Rogers Place we were really already a part of the community, [starting] from how we embraced the construction process.”