Celebrating the next chapter 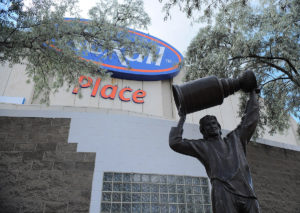 For nearly 27 years, thousands of Oilers fans were greeted by a 950-pound bronze statue of Wayne Gretzky before entering into Rexall Place to watch their favourite team in blue and orange take to the ice.

With the upcoming move to Rogers Place this fall, the famed statue will be following the team to its new home outside the Oilers Hall-of-Fame Room on the 104 Avenue sidewalk. This move not only symbolizes the rich history of the Oilers, but marks the beginning of a new chapter for the storied franchise.

Erected at Northlands Coliseum on August 27, 1989, the statue was funded by Molson Brewery and gifted to the City of Edmonton in honour of Wayne Gretzky’s contributions to both the city and the team. 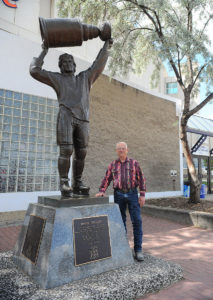 “When Wayne first saw it he said — it’s kind of spooky to stand there and look at yourself,” laughed Don Begg, the bronzesmith behind the statue.

Begg returned to Rexall Place on Thursday, August 4, to help with the transfer of the statue back to its birthplace at Studio West in Cochrane, Alta., where it will be refurbished and cleaned.

“We just want to make it look good and shined up for its new location,” Begg said.

Sculpted hoisting the Stanley Cup above his head — evoking a sense of pride and celebration for those who walk past — the renowned Gretzky statue stands at nine-feet, two-inches tall, making it the most recognized meeting point among fans for generations.

Watching fans take one last photo with the statue before the big move, Begg said, “That’s what it was made to do — to honour the Oilers and Wayne, to show that this was somebody of great importance.”

“I’d like to have a penny for every photograph that’s been taken of it!” He also added with a laugh.

A public installation and unveiling will commemorate another milestone in the opening of Rogers Place. This historic statue will sit proudly in front of the city’s newest world-class, revolutionary and high-tech facility — celebrating the past, present and future of the Edmonton Oilers and its countless ardent fans.

Stay tuned to RogersPlace.com for more information on the public installation and unveiling of the Wayne Gretzky statue at Rogers Place.