Charity Hat Trick of the Playoffs 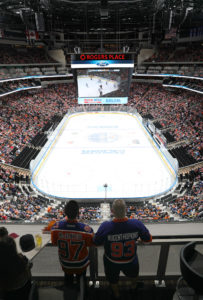 Playoffs are an exciting time of year, not only for the fans and players but for the charity aspect as well. With the help of our fans we were able to achieve a charity hat trick this playoff season. We scored our charity hat trick with the watch parties, player hat tricks and the 50/50 draw.

Our charity hat trick starts with the Orange Crush Watch Parties. The Watch Parties allow fans to cheer the Oilers on the big screen during away games. The games cost $5 with all proceeds going to the Edmonton Oilers Community Foundation (EOCF) to reinvest back into the community.  It gives families, young people and individuals the chance to experience an Oilers game who would not normally have the opportunity otherwise. The fans love to bring the Orange Crush by singing the national anthem, chanting and starting the wave like a home game would be in Rogers Place. The Watch Parties have been sold out, time and time again with Game 7 selling out in just two minutes with over 18,000 fans attending. 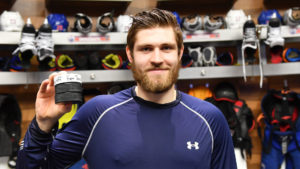 Next in the charity hat trick, was Leon Draisaitl’s own hat trick during game six which was memorable both on and off the ice. The fans were so excited over Draisaitl’s hat trick, they threw their hats on the ice.

“Hats poured on the ice, raining really from every place. We had over 1,000 hats flooding the ice,” said Edmonton Oilers Community Foundation Executive Director, Natalie Minckler.

All the hats were collected off the ice, Rogers Place kept a few hats for our memories and the rest went to agencies around Edmonton. One agency the hats were donated to is Operation Friendship Senior Society, helping inner city seniors over 55 years old.

“The cool part was coming to work that day and hearing our seniors and hearing the excitement in their voices, sharing stories about playoffs pasts. A lot of the younger generation is living it up with the playoff run this year, but a lot of these guys were here in the hay days,” said Community Relations Supervisor for Operation Friendship Senior Society, Jimmy Morrison. 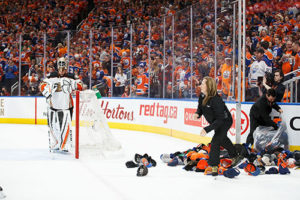 The hats will go a long way, especially with the warmer weather to help keep the seniors cool.  Even the hats from Jordan Eberle’s hat trick, earlier in the season were donated to agencies around Edmonton.

We end our charity hat trick with the 50/50 draw. With the 50/50, the winner gets half of the money and the other half goes to Edmonton Oilers Community Foundation (EOCF). During the playoffs, we have paid over one million dollars to the prize winners. That means over one million dollars also went to EOCF to reinvest back into our community. EOCF works with over 300 charitable foundations annually, such as inner city high school for marginalize at risk youth, Stollery Children’s Hospital, recreation centres in Northern Alberta, outdoor rinks and the Edmonton Food Bank to name a few. EOCF focuses on education, health and wellness for youth.

“When they (fans) support the Community Foundation through the purchase of 50/50, it’s really their permission to allow us to reinvest back into the community. Our fans support is critical to our success to allow us to do what we do,” Natalie Minckler.

We cannot thank our fans enough for helping us achieve a charity hat trick this playoff season.