“Musically, the group was virtually flawless”” – Boston Herald
“Easily the best touring live show this year” – Indianapolis Star
“Coldplay started its show the way most bands would end theirs
(and it) only got better from there” – Newsday

Due to phenomenal demand, Coldplay has added three extra dates to the 2017 North American stadium and arena run for its award-winning “A Head Full Of Dreams Tour,” which will feature the band’s first Canadian dates in five years.

The new dates include second shows in Edmonton and Toronto, plus a third night for the tour at LA’s Rose Bowl, following the band’s two triumphant sold out shows in 2016.

The final list of North American dates is as follows:

Since March of this year, the “A Head Full Of Dreams Tour,” produced by Live Nation Entertainment, has played to 2.5 million people across Latin America, the U.S. and Europe. The show was created by the band alongside celebrated production designers Misty Buckley and Paul Normandale. The tour reaches Australia and New Zealand in December.

Citi is the official credit card of the “A Head Full of Dreams Tour” in the United States. Citi cardmembers will have access to presale tickets beginning Monday, October 10, at 12:00 p.m. local time through Citi’s Private Pass Program. For complete presale details visit http://www.citiprivatepass.com.

A Head Full Of Dreams has sold more than five million copies since its December 2015 release. The videos for the album’s hit singles – “Adventure Of A Lifetime,” “Hymn For The Weekend” and “Up&Up” – have more than a billion YouTube video views combined. The band has won seven GRAMMY® awards to date. 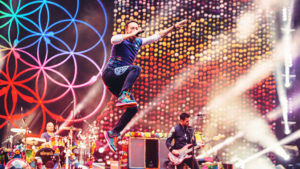