Tom Cornwall’s title with the Oilers Entertainment Group is Vice-President of Facilities/Operations, but he could very well join the scouting department.

When Tom was working at the 2002 Salt Lake City Olympics, a teenage volunteer caught his eye, who just happened to be his son Zach.

“I saw his passion for this industry and I started to think maybe it could really happen,” Tom says.

Zac admits he really didn’t understand what his father did when he was a kid. But when he attended the 2014 National Hockey League Winter Classic, he really got a taste for what Tom did.

“I’ve been on working (for OEG) for four months. I’ve hung around so much for the past four years that they finally decided to put me to work.”

Zach is an Events Manager for Rogers Place and will work with the Edmonton Oil Kings, concerts and other special events.

“The last month has been a blur of developing protocols and planning for the opening events at Rogers Place,” says Zach. “Our world class team has been putting in long hours to properly showcase the incredible venue that my dad helped design.”

The Cornwall family’s long relationship with the Oilers started in 1995. Tom, who grew up in Iowa, came to Edmonton to work on renovations of, what was then, Northlands Coliseum. Four years later he left for an Olympic management career.

Then, at the end of the Vancouver 2010 Olympics and Paralympics, he returned to Edmonton and joined the Oilers Entertainment Group.

“My last months have consisted of bringing to life the designs that we spent so many years developing,” Tom says. “And now it’s about transitioning from construction to operation and helping Rogers Place VP/GM Susan Darrington’s team test their management and operations plans leading up to the opening events.” 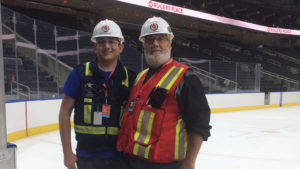 “My role will continue to focus on the transition into Rogers Place and the first year of operations in the building, as well as working with Bob Black, Senior Vice-President of Business Development with the other phases of the whole ICE District project.”

It’s exciting times for Edmontonians with the opening of Rogers Place. It’s also a thrill for a father-son team working on it together.

They are both looking forward to the excitement of the first event in Rogers Place and watching patrons experience the new building they have helped create.

And they feed off one another’s energy.

“Teamwork makes the dream work,” says Zach. “My dad has taught me that there is no such thing as ‘not my job’, from straightening out furniture in a lobby, to picking up garbage on the concourse, to lending a hand wherever it is needed. At the end of the day everybody pitches in to make the event successful. At 29, I struggle to keep up with his energy and enthusiasm for projects.”

“It is a huge honor to be working beside Zach and sharing our passion for this iconic project.  He brings a smile to my face every day. OK, well most days! We constantly push each other for the greater good.”