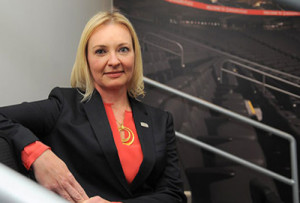 EDMONTON, AB – It was a family affair at the Rogers Place Presentation Centre this morning as Oilers Entertainment Group (OEG) welcomed Susan Darrington as the new Vice President, General Manager of Rogers Place.

Tim Shipton, Vice President of Communications at OEG, welcomed the room, with a special nod to Darrington’s father, Neil Campbell — former General Manager of Northlands Coliseum — and aunt and uncle, Sherry and Brent Lewis, who were in attendance.

“It’s a very exciting day for the Oilers Entertainment Group as we announce Susan
Darrington as our new General Manager and Vice President for Rogers Place,” said Shipton.

“We’re growing our stable of talent and adding somebody of Susan’s depth, expertise and experience — and of course her roots in Edmonton — it just couldn’t get any better. It really feels like a homecoming for us today, we’re thrilled to make this announcement.”

As Vice President and General Manager for Rogers Place, Darrington will be responsible for bringing the venue to life, overseeing the overall management and day-to-day operations during the pre and post-opening periods.

“It’s absolutely an honour and a privilege to be back in Edmonton,” said Darrington. “To come back and see the opportunity (that’s) in front of the city, with Rogers Place and the Ice District, was something that I couldn’t pass up. “

From booking events to planning the opening strategy, Darrington will also be implementing the overall business and operating culture for the building.

“I had the opportunity to tour Rogers Place about two weeks ago and the OEG group has done an outstanding job, and coming into this project, the detail that has been put into this facility, the square footage, the fan amenities, it’s got more hospitality than I’ve ever seen,” she said.

“I’ve had a chance to see venues in South America, in Europe, North America, the Rogers Place video screen is I think the same size as the one in Cowboys Stadium, it’s truly going to be an outstanding experience for Oilers fans and fans of entertainment.”

No stranger to hard work

A born-and-raised Edmontonian, Darrington has a diverse resume and background in the industry.

The venue saw more than 170,000 guests in the first 20 days of operation and was nominated for New Stadium of the Year at the International Stadium Business Awards in Barcelona in June.

“We did a worldwide search for this position,” said Bob Nicholson, Chief Executive Officer of OEG.
“It’s such a big position to add to our team, we didn’t realize the ties back to Edmonton when we started to have the conversations with Susan but her resume is, what we feel, as good as there is in the business.”

Prior to Allianz Parque, Darrington served as Vice President of Facility Operations and Services from 2004-2012 for First & Goal Inc., operators of the 68,000-seat CenturyLink Field in Seattle, WA. 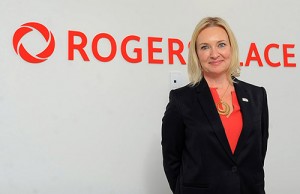 In addition to launching CenturyLink Field, Darrington oversaw all aspects of operations that included stadium expansion, facility use guidelines, venue operations for Seahawks and Sounders games and worked with the entertainment industry’s top promoters to book top performers and speakers, such as U2 (360 Tour), Kenny Chesney, the Dalia Lama and President Barack Obama.

It’s been a long road for Darrington, having started her career in Edmonton at Northlands Coliseum as an usherette at the age of 15, but her ready-and-willing attitude has not dwindled.

“Coming back to Edmonton and seeing what Rogers Place will do for the fans of Oilers hockey, and the opportunity to bring content to downtown Edmonton, it’s going to be a spectacular project,” she said.