Thirty-seven years as a band and finally Depeche Mode, the synth-pop titans from Basildon, Essex made a stop in Edmonton.  To put that into perspective for Edmontonians, the Oilers joined the NHL in 1979, only a year before Depeche Mode was formed. However, if there was ever a time to use the old cliché “it was well worth the wait,” Friday night’s show at Rogers Place was definitely the night.

Opening the night was American indie band Warpaint, who’ve been alongside Depeche Mode since August. As fans flooded the arena, Warpaint filled Rogers Place with a selection of tracks off their latest album, Heads Up.

With the crowd officially warmed up, the main act appeared on stage as shadows among the mist. As the lights went down, the band was greeted with a warm welcome, as if this was their 100th visit to the capital region. It took Depeche Mode leading man, Dave Gahan, all but one song to strip down to his signature vest and leather pants. Generations of the band’s fan base stood in applause right from the opening number, “Going Backwards,” off the band’s 2017 album, Spirit. In fact, the majority of the lower bowl stood for the entire concert – dancing, hugging and high-fiving the night away. 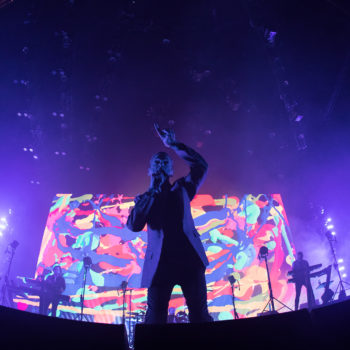 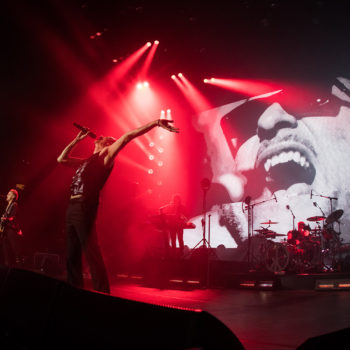 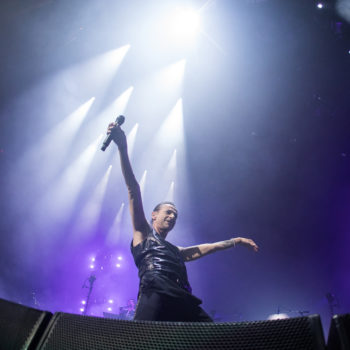 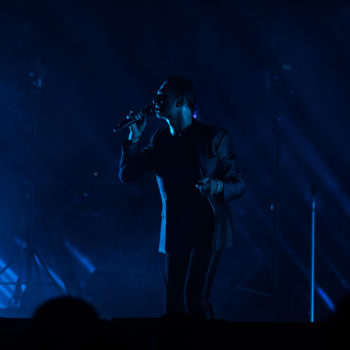 Always the showman, Gahan lived up to his high-energy reputation by dancing, twirling and spinning around the stage throughout the night. At many points during the show, the singer offered up the mic to the crowd encouraging them to sing the words to the band’s most famous songs. The singer embraced the crowd on many occasions and reached into the first few rows as the night went on. Depeche Mode guitarist, Martin Gore, while a little more subdued was equally impressive in his musicianship. Gore took over the mic for an acoustic performance of “A Question of Lust” and the Ultra track “Home.” The two songs allowed Gahan a much-needed break mid-set but the fans didn’t seem to even notice as Gore was very well received on the mic.

As the set travelled across ten different Depeche Mode albums, it was the tracks off their most successful album, Violator, which brought the crowd into new heights. “World in My Eyes” and “Enjoy the Silence” were highlights of the main set while “Personal Jesus” closed the night on a high note. To no one’s surprise, the crowd’s response to “Enjoy the Silence” was showcased in choreographed clapping, as Edmonton sang along with Gahan to the chorus.

A night to remember for Rogers Place and the throngs of Depeche Mode fans who waited nearly a lifetime to see their favourite band play a venue in this city. The band showed zero signs of slowing down and provided a performance that would’ve echoed any one of their famous world tours. With house lights on and fans turning to exits, it was the smiles that proved this show was well worth the wait.