“Dad, what’s a harmony?” a young fan asks in the merchandise lineup for the Eagles concert at Rogers Place Tuesday night. With a smile the father replies, “You’ll soon find out.” Unwittingly, the new fan could’ve summed up an entire night of discovery for those who’ve never seen the Eagles, while those who’ve been numerous times were reminded why they keep paying to see the iconic band. There are few, if any, musical acts still on tour that can boast six musicians capable of carrying lead vocals to an arena crowd and when they’re lined up in a row singing in unison, they’re unmatched.

Rolling through Edmonton this week, the latest incarnation of the Eagles proved that no matter how many changes they make to their roster, two things still remain in their music – perfect vocal harmonies and lots of guitars. On this particular tour, with the unexpected 2016 passing of Glenn Frey, the band recruited legendary country music star, Vince Gill, and Frey’s son Deacon. Both filled in exceptionally and held their own with longtime Eagles Don Henley, Joe Walsh and Timothy B. Schmidt. Steuart Smith, a member of the band since 2001, rounded out this group of Eagles.

Before the Eagles filled Rogers Place with their two and half hour career-spanning set, opening act JD and the Straight Shot warmed the crowd up. The country and blues act, led by Madison Square Garden Company Exec Chairman, James L. Dolan, were in a tough spot playing for a wound-up crowd eager for the Eagles to get their long set started. But the band took their opening role in stride, joking that it’s always fun to play for a crowd that has more fans in it than building hosts. 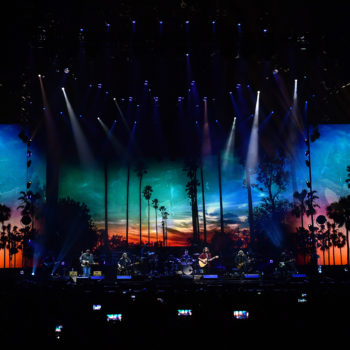 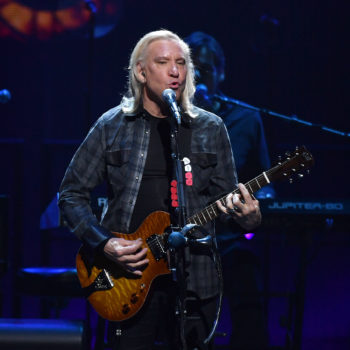 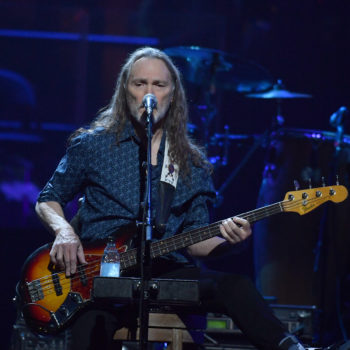 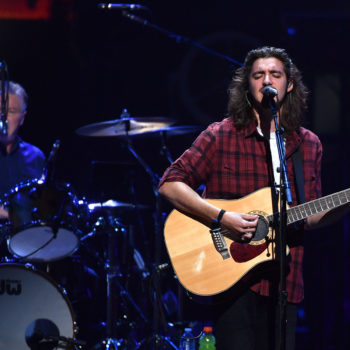 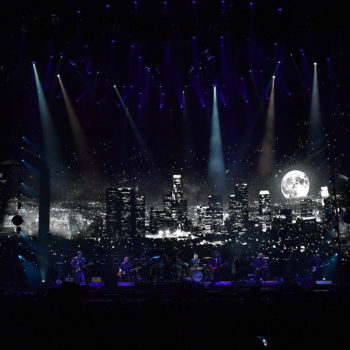 Following a brief intermission,  the lights dimmed once more and the stage filled with bodies reaching for guitars.  As each member found their weapon of choice, they lined up at the front of the stage for a magnificent rendition of  “Seven Bridges Road.” The strength of the six vocalists felt like a choir of 100 inside Rogers Place and with each member strumming along the sound was flawless. Don Henley stood front and centre at first, but eventually moved back and forth from his usual spot at the drum kit.

Next, Joe Walsh was greeted with a rapturous applause as he formally introduced the young Frey for one of the band’s biggest hits, “Take It Easy.” Frey’s youthful vocals provided a breath of fresh air to the classic track and proved right away he wasn’t just some kid with a bloodline benefit; he belonged on that stage because of his talent. Throughout the night, Frey was visible on all tracks both with his vocals and guitar; no easy task when being flanked by one of the greatest to ever do it – Joe Walsh.

Not that Vince Gill needed an introduction, but for the up-and-coming fans in the audience, Henley welcomed him to the front where Gill took lead vocals on “Take It To The Limit.” A collection of violinists joined Gill for the song and the crowd responded by singing along to the chorus. As the vocal duties were shared around it was Joe Walsh’s turn after Gill finished up with a strong rendition of “Tequila Sunrise.” Walsh’s first lead vocal was “In the City,” a track off the Eagles l979 album, The Long Run. The track also gave Walsh his first chance to show the Edmonton crowd his legendary guitar sound. There’s no literal way to describe Walsh’s performance throughout the night, but if forced he would be described as so mesmerizingly talented that it seems unfair to other musicians.

The set continued with a large portion of acoustic selections which included “Peaceful Easy Feeling” which Frey dedicated to his late father, “Lyin’ Eyes” with Gill on lead and “Victim of Love.” The large acoustic section in the middle of the set, although slow at times, was well received by the Rogers Place crowd. When the band decided to put away the acoustic guitars for electrics, Henley stepped to the mic and beckoned the crowd to “get up” for “Heartache Tonight.” Once on their feet, the crowd stood for the majority of the remaining tracks, which became the high point of the entire night.

Walsh thrilled once again, stealing the show for “Life’s Been Good,” one of the more famous songs he wrote as a solo artist. Pairing his high pitched, unique vocals with his legendary guitar tone, Walsh was clearly the crowd favourite. In fact, if there was a song that could upstage the band’s performance of “Hotel California” it was “Rocky Mountain Way.” Both aforementioned tracks came in the encore section of the night, and while those in attendance would probably argue until the ends of time about the high point, the crowd responded loudest to the encores.

Henley, whose vocals were flawless on every song, finished off the night with “Desperado.” Over two and a half hours of chart-topping singles, Joe Walsh solo tunes and classic favourites left the Rogers Place crowd meandering to the exits with smiles on their faces. The Eagles, still relevant and unique in their performance, gave ticket holders what they paid for – a plethora of guitars and unmatched vocal harmonies. Hopefully, the young fans discovered what a harmony is and the long-time fans left with new memories to match their old ones.