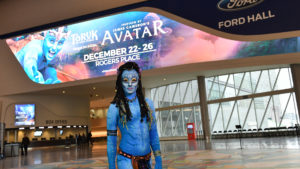 Acting as a prequel to James Cameron’s Avatar, Cirque Du Soleil’s Toruk — The First Flight will transform Rogers Place into a mystical world of Pandora over the holiday season.

“It’s unlike anything you’ve ever seen before!” exclaimed Toruk Spokesperson Laura Silverman.

“You’re going to see large-scale puppets, indoor kites, incredible projections; all of these elements that are bringing to life a new world and give audience members a chance to escape to Pandora.”

Covering approximately 15,000 square feet for staging, the tour requires 27 trucks to transport all the equipment and roughly 12 hours to build the set.

“The very first thing we do is lay down our own floor,” explained Silverman. “It’s about 700 square panels. Above that we build the entire stage and set. It’s about a 12-hour build.”

With 42 projectors and immense lighting equipment, what was once a hockey arena will be completely transformed into the breathtaking fictional universe of Pandora.

“Lava one minute, lush greenery the next.”

Touring with Toruk for over a year, Ward plays a Na’vi, — a blue indigenous inhabitant of Pandora — alongside 41 other performers.

For those who are not familiar with the film Avatar, fear not! For the first time ever, Cirque Du Soleil will feature an English-speaking narrator, who will guide the audience along the journey following three Na’vi teenagers. The storyline takes place 3,000 years prior to the events which occur in the film, thus acting as its prequel.

“It’s quite different to what Cirque has done in the past, in that it is a multimedia show. It’s just amazing what you see — lava one minute, lush greenery the next,” said Ward. 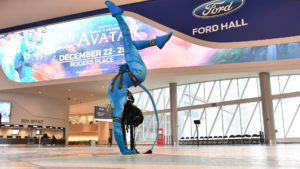 Ward performs an acrobatic stunt inside Ford Hall ahead of the Toruk — The First Flight tour stop at Rogers Place.
Photo by: Andy Devlin / Edmonton Oilers

The 28-year-old Australian acrobat explained that she just recently resigned her contract to tour with Cirque Du Soleil, admitting it has been a lifelong goal for her to perform with Cirque.

“I started out dancing when I was three. My mom started teaching acrobatics when I was four, I did competitive acrobatics and dance for a long time,” said Ward.

“I auditioned four years before I actually got the job. It’s been a really long and hard road to get to here,” she smiled.

Someone who can attest to both her personal journey and the astounding acrobatics that awaits fans in the marvelous world of Pandora is Ward’s mom.

“I think she’s seen the show seven or eight times, and I think she cries every time she sees it!” laughed Ward when asked how her mom has reacted to her success.

“It’s been amazing to have her support.”

Marking their last stop of 2016, Toruk — The First Flight will be at Rogers Place performing eight shows between December 22 and 26. Limited tickets are still available for those looking to escape the cold and wander into the enchanting world of Pandora!