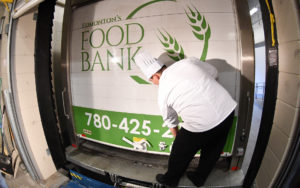 Over the summer, the Edmonton Oilers Community Foundation (EOCF) gifted Edmonton’s Food Bank with a hefty donation of $185,074 for the purchase of a new, five-tonne refrigerated truck. The truck, which can hold up to nine pallets of food — approximately 8,000 lbs. — allows for Edmonton’s Food Bank to pick up and distribute food donations to those in need across the city. On Tuesday, November 22, the refrigerated truck made its inaugural visit to Rogers Place, as part of the Rock and Wrap It Up! program.

Partnering with the NHL since 2010, the Rock and Wrap It Up! program encourages sports and entertainment venues to freeze and donate any excess food prepared but not served by the facility to food banks — food that may have otherwise ended up in a landfill.

“As much as we try to have a waste minimization program, you still have leftovers and in the past, a lot of it would just go in the garbage. This program provides us with the opportunity to not only minimize waste, but to help our community,” said Oilers Entertainment Group (OEG) Vice President of Facilities and Operations, Tom Cornwall.

Since its inception at Rexall Place in 2010, the Edmonton Oilers have helped to contribute more than 40,000 pounds of food to Edmonton’s Food Bank through the Rock and Wrap It Up! program. This provided approximately 35,000 meals in Oil Country for those in need.

“Now as we move to Rogers Place, we have restarted the program with the Edmonton Oilers Community Foundation, Edmonton’s Food Bank and Aramark,” said Cornwall. 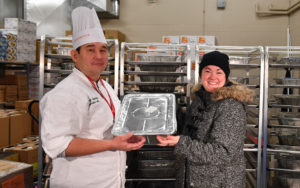 It is expected that 500 to 700 pounds of food will be picked up by the refrigeration truck at Rogers Place and donated to the food bank every two to three weeks. This number will vary depending on the number of events held at the arena, but with more frequent pickups — compared to the quarterly pickups made previously at Rexall Place — a more consistent availability of food donations will be accessible to those in need.

“It’s a great opportunity for us to be able to reach out to the community and work with Edmonton’s Food Bank, and it’s our responsibility and our privilege to do this,” said Rogers Place Executive Chef Johnny Blackerby.

“When we get into December now, we’re going to be having 25 out of 30 days of events, so that will generate more food [to be donated],” Cornwall added.

“Forty per cent of the people we’re serving at the Edmonton Food Bank are children,” said Manager of Strategic Relationships and Partnerships with Edmonton’s Food Bank, Tamisan Bencz-Knigh.

“We’re here filling the need all year round and thanks to groups like Rogers Place, we’re able to do that. We are able to feed others because of the generous support of the community.”

The program not only allows for OEG, Rogers Place and the EOCF to give back to the community, but it plays a substantial role in the sustainability and Green initiatives that were not only established during the construction of Rogers Place, but continue to remain a priority for the building as it moves into operation.

“We work hard to minimize over-production and waste. After that, if there is any over-production we reach out to Edmonton’s Food Bank and they will come pick it up,” said Blackerby.

The first pick-up for the Rock and Wrap It Up! program at Rogers Place was a humbling moment for the employees who helped to load the truck.