From a downtown guy… 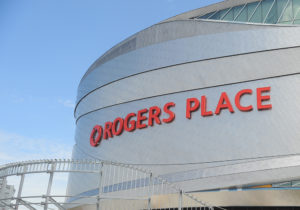 And, a few weeks ago he proved it: when Kelly drove into Edmonton from Calgary and checked into his downtown hotel — where else, right? — he went for a drive.

Kelly didn’t head to Edmonton’s west end neighbourhood Elmwood where he grew up. Nor did he head down 163rd St. to pass by Jasper Place Arena, now Bill Hunter Arena, where Kelly played Bantam and Midget in the Canadian Athletic Club.

It was a spin by Rogers Place, the new downtown arena.

“That was the first thing I did when I drove into town — I drove by the project,” says Kelly, who played golf in the Edmonton Oil Kings alumni tournament recently at The Links in Spruce Grove.

Kelly played goal in the National Hockey League, starting with the New York Islanders in 1983. He also was between the pipes for the Los Angeles Kings and retired as a member of the San Jose Sharks in 1998.

Kelly, now 55, was the enemy to the Edmonton Oilers for countless hockey games. But never, once, to the city where he was born.

“I am bias being from here,” says Kelly.

“I was always very happy the city was getting a downtown rink and I think (OEG chair) Daryl Katz’s vision is fantastic,” Kelly says. “I drove by the downtown thinking, ‘Wow. What a great gift to the city’. 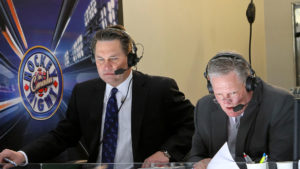 In his playing days with the LA Kings, Kelly and his colourful bandanna played out of the L.A. Forum in Inglewood, California. Great building with all kinds of character.

“It wasn’t a destination point,” says Kelly. “The old Forum might have been, but not the area where it was built.”

After Kelly hung up his mask and skates, he turned to broadcasting. He is currently a panellist and a commentator for Hockey Night in Canada and Rogers Sportsnet.

“In my travels, the first thing I see from downtown arenas is they are destination points — they bring people together,” says Kelly.

Kelly says Edmonton will have the same excitement as the Ice District evolves in Edmonton.

“I was working a hockey game in Los Angeles one weekend,” Kelly says. “The Eagles were playing the night before at the Microsoft Theatre and my wife Donna and I went to see them.

“The excitement around the place was great. And that’s what you will have in Edmonton.”

Kelly leans back in his chair when a smile crosses his face before he serves up a parting zinger.

“I hope,” he says with a chuckle, “one day we can get a new downtown arena in Calgary.”