From Rogers Place with Love

That’s how long it had been since Canada won a medal in the men’s 10,000-metre speedskating event at a Winter Olympics.

For Canadian Olympic speed skater Ted-Jan Bloemen, it took all of 12 minutes and 39 seconds to not only medal but bring home gold.

It had been eight years since Canada even qualified for the men’s 10,000-metre event at the Winter Olympics and Bloemen made sure not to waste the opportunity.

Making 27 laps look effortless, the Olympian glided his way to gold, ending the 86-year medal drought and winning Canada’s second ever medal in the long-track speedskating event; the first coming in 1932, a bronze won by Frank Stack.

“He won not only a gold but also a silver medal (in the 5,000-metre event) and he was pretty much the only Canadian to medal twice in the sport,” said Matt Messer, who was present for the Canadian’s win.

“He came down and took a picture with all of us with his medals, as just kind of a thank you.”

Messer, Supervisor of Ice Operations at Rogers Place, was one of two members invited from the Edmonton arena to join a prestigious team of ice specialists that would be responsible for building and maintaining the Gangneung Oval Olympic speedskating track — the very same ice that Bloemen would eventually skate and make Canadian history upon.

Hanson Skotheim, Rogers Place Arena Technician, who joined Messer, said the PyeongChang Olympics organizing committee looked to outsource the responsibility of making and resurfacing ice to foreign experts to ensure a top-quality product was provided to the athletes.

“The Koreans don’t have as much experience with building and maintaining ice, so when it came to reviewing that, they wanted the Olympics to be successful,” said Skotheim. “They wanted the ice to be as good as possible so they asked Canadians (among other international experts) to come over.” 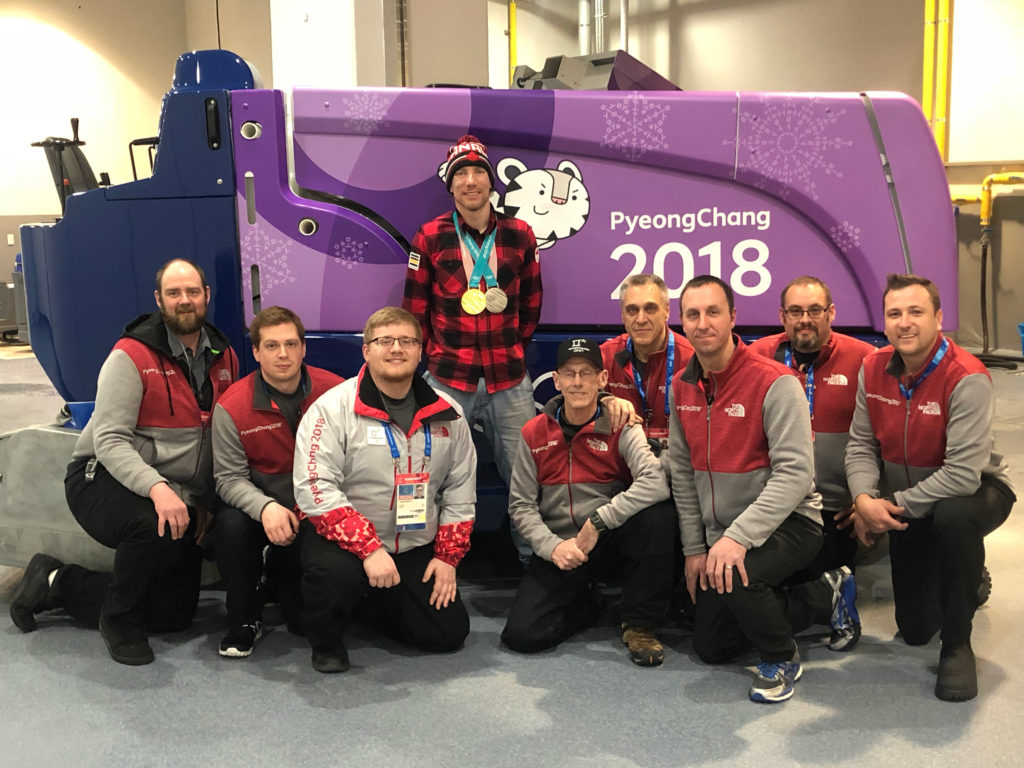 Good doesn’t even begin to cover it. In fact, one might say the eight-man team at Gangneung Oval exceeded expectations.

Not only did the oval they built and maintained see the return of the Speed Skating Mass Start event since it made its first and only appearance at the 1932 Lake Placid Olympic Winter Games, but they would go on to see seven Olympic records and three low-land records set over the course of the two-week international sporting event.

“Which made us the third fastest oval in the world,” added Messer.

Messer and Skotheim were hand-picked as part of the team of eight North Americans — seven Canadians and one American.

“I felt honoured to go and I felt pride to represent my country over there,” said Skotheim, whose over 10-years of experience in arena ice building has seen him transition from community rinks to the Olympic Oval in Calgary and now Rogers Place.

Building a rink is no easy feat, and though the North American crew was outfitted with members that had a wealth of experience, the pressure to deliver top-quality ice could still be felt for Messer and Skotheim, who were each working and experiencing their first Winter Olympic Games together.

“They’re the best athletes in the world so they expect the best ice sheet in the world for the Olympics,” said Skotheim. “It only comes by every four years, so the expectations are high.”

“Everybody there had to elevate their game a little bit,” said Messer. “Make sure that everything was checked twice-over to make sure everything’s perfect, you didn’t want a rogue piece of snow stuck on the ice that takes out a skater, or anything like that.”

What may have helped ease the pressure were the test sheets they built over two trips prior to their arrival for the actual Games in South Korea.

“I’ve been there three times actually, counting the Olympics,” said Messer. “We did an original test sheet, the first sheet that they’ve ever done. We painted that up for the [2017 World Single Distance Speed Skating Championships] that they held there…and then just last November we went there and did another test sheet, just to make sure that everything was good to go before we set up for the Olympics.” 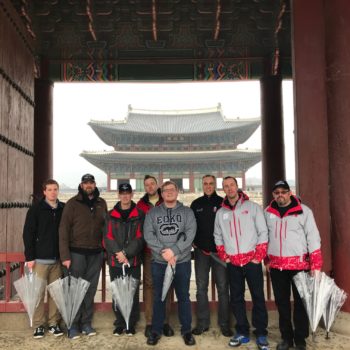 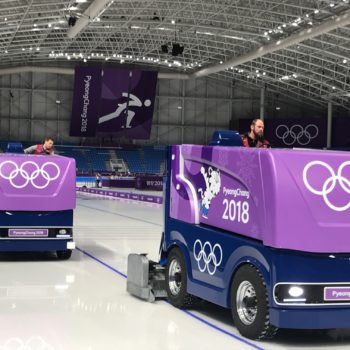 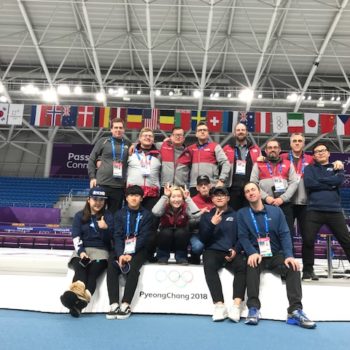 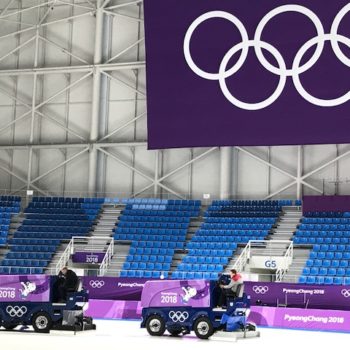 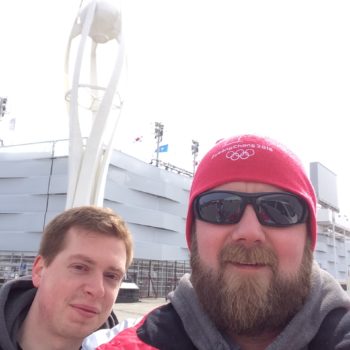 Among the high expectations, Messer and Skotheim had to switch gears from their typical NHL ice building and maintenance to deliver a sheet of ice that would be on prominent display in Pyeongchang.

“There’s definitely a lot more to building ice than most people would assume,” said Messer. “A lot of people think we just kind of turn the hose on and let it freeze. There’s a lot more science behind it that people don’t really get to see.”

The 26-year-old, who was introduced to the realm of ice installation by his dad, started working full-time in community rinks when he was 18 years old.

Three years into his newly chosen career, he earned a position as an NHL ice technician with the Calgary Flames at the Scotiabank Saddledome before crossing the Battle of Alberta line to make the move to Rogers Place, which was recently named the second-best ice as voted by the players in the 2017-18 National Hockey League Players Association (NHLPA) Player Poll.

“That was outstanding,” said Jason Rimmer, Director of Engineering and Ice Operations at Rogers Place.

“For us, it’s always difficult to try and quantify how good the ice actually is because it is very subjective.For the NHL Players Association to come back and vote it number two in the League after a year-and-a-half of operations, we were very excited about that.”

Every year, the NHL Players Association holds a poll for the players who play the game every night to give their opinions on their opponents, coaches, on-ice officials and buildings around the League.

Over 500 players took part in the poll, who were surveyed on more than 20 hockey-related questions during their annual NHLPA team meetings, between the pre-season and early January 2018.

It’s only the building’s second season in the NHL and thanks to the team of 13 that maintain the ice at Rogers Place, including Messer and Skotheim, it’s certainly a big honour.

Rimmer noted a few issues experienced in the first year of ice operations at Rogers Place as the team learned the various systems and how they interacted together in a brand-new building.

“To come out this year and to pop into second place really is a testament to the team and the dedication in going through all the equipment, making sure it’s working the way it should be.”

At first glance, making the switch from building an NHL-size rink to a speedskating oval would appear to be a massive undertaking. A 400-metre track, the Gangneung Oval is about the size of four NHL rinks.

“There’s a lot of ice in there to maintain,” said Skotheim.

But with a wealth of experience under their belts, Messer said that switching gears from producing and maintaining an NHL rink to building and maintaining a speedskating track wasn’t too difficult for he, Skotheim and the Olympic ice specialist team, as there are many similarities when creating the two, “with a few tweaks.”

“Oval ice is a lot harder and faster so we keep it a lot colder, somewhere around -9 degrees Celsius, whereas NHL ice you keep it around -5 just for a little more grip,” said Messer, who explained that the ice is designed to get more glide out of every push for speed skaters.

The two weeks–long adventure was full of challenges and new experiences, but ultimately left both Messer and Skotheim in awe and appreciation, thankful for having been given the opportunity to each experience what Rimmer considers the pinnacle of ice making.

“Any time you get invited to the Olympics and have the ability to go, it’s outstanding,” he said.

“I’m very proud of the guys for having the ability to be selected and going down and setting seven Olympic records, that’s fantastic. Thanks to the Oilers organization for giving them the ability to go down and to the rest of the Rogers Place ice team that had to make up for when they were gone. There were a lot of good things that came out of it.”