Edmonton — June 8, 2016 — Gateway Casinos & Entertainment (Gateway) today hosted a first-look tour of its newest property in Edmonton’s ICE District. Tony Santo, CEO of Gateway, was pleased to be joined by Mayor Don Iveson, MLA David Shepherd and Councillor Scott McKeen as he led a hardhat tour through the construction of Grand Villa Edmonton. 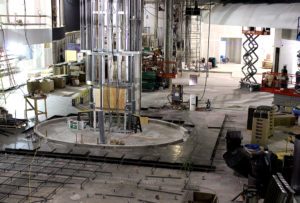 “We are excited about the progress we’re making in ICE District,” said Tony Santo, CEO of Gateway. “Along with the new restaurants and amenities we announced today, and more to come in the future, the Grand Villa Edmonton will provide our guests with an incomparable escape from their daily life as we redefine entertainment in Edmonton.”

The project will bring up to 200 new permanent jobs and a $32 million investment to the Edmonton economy. In addition to this long-term investment, the project will result in 450 person-years of construction employment.

On June 15, 2016 from 10:30 a.m. to 3p.m. MDT, Gateway will be hosting another job fair at the Matrix Hotel. Gateway is looking to fill a number of roles including dealers, sous chefs, bartenders, and slot attendants. Interviews will be conducted on site at the Matrix Hotel. More details on the job opportunities are available at http://www.gatewaycasinos.com/gw-careers.

With over 60,000 square feet of entertainment space, 24 gaming tables and 600 slots, the Grand Villa will be an exceptional addition to Edmonton’s vibrant and rejuvenated downtown. A grand opening is scheduled for fall 2016.