There’s no doubt that the future looks bright for Rogers Place, the soon-to-be home of the Edmonton Oilers (NHL) and the Edmonton Oil Kings (WHL), with its doors slated to open for the 2016-17 season. With the new arena’s construction in full swing and things looking up, literally, the project is also trailblazing in all-things ‘green’. Rogers Place, in the heart of downtown Edmonton will be the first LEED Silver-certified NHL facility in Canada. This state-of-the-art facility will act as a catalyst to the city’s downtown core while also setting the bar for future growth and sustainability.

It’s certainly the golden age of stadium sustainability all over the world as there has been an explosion of interest in green building design in the last few years. Globally, stadiums are incorporating environmental intelligent operations into their design right from the start. This progressive approach has naturally been motivated by the ever-increasing public awareness and interest in better environmental responsibility across society and the benefits to the planet. Despite this, being LEED-certified is a rare feat, with only 20 stadiums or arenas meeting this standard in professional sports. 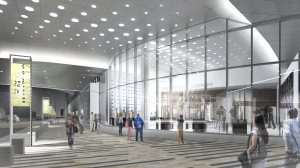 “Being LEED-Silver certified establishes Rogers Place as one of the leading environmental venues in North America and around the world. There aren’t even two dozen professional sports venues that are LEED-certified so it’s quite the achievement,” said Dr. Allen Hershkowitz, President and Co-founder, Green Sports Alliance. “It’s a confirmation of smart operations. It’s a confirmation that Rogers Place is committed to a healthy community and Edmonton’s future generations.”

Dr. Allen Hershkowitz, formerly a 26-year Senior Scientist at the Natural Resources Defence Council in the United States, is renowned in the green community for his work as co-founder of the Green Sports Alliance, a non-profit that helps sports teams, leagues and venues enhance their environmental stewardship, as well as his role in co-founding NHL Green in 2008 alongside NHL Commissioner Gary Bettman. He serves as the NHL’s principal environmental advisor and has been involved in a number of stadium operation projects. Dr. Hershkowitz emphasises that being LEED-Silver sends a strong message across pro sports and to your fan base. Of course, he hopes that more NHL teams will look to Rogers Place when it’s time for new arenas in their respective cities.

“You don’t just become LEED-Silver overnight. While designing this new arena, a number of factors would have been considered,” shared Dr. Hershkowitz. “It’s clear that Rogers Place’s planning core has thoughtfully considered how to reduce its energy use, save money on water, promote recycling, food composting and identify safer cleaning chemicals, just as a few examples.”

Rogers Place has focused on environmental performance from day one. During construction to date, 94.8 per cent of waste has been diverted from the landfill. That’s 3,469 tonnes of waste that has not caused excess landfill pollution in Edmonton. According to Dr. Hershkowitz the significance here lies in reducing your waste and instead, recycling or repurposing materials like Rogers Place has done. By not sending waste to a landfill or incinerator, you’re reducing the environmental problems associated with waste including pollution and carbon emissions. This awareness is a sure sign of green design.

“You’re basically designing and operating a facility to enhance environmental efficiency. Pollution is waste – the more efficient you are, the less waste you produce. If you’re being less wasteful, then in turn, you’re going to have less air pollution and less carbon emissions associated with waste,” said Dr. Hershkowitz.

Beyond waste reduction, Rogers Place’s LEED-Silver certification will be anchored by other sustainable efficiencies including development density, transportation, reducing water use and optimizing energy performance.

“From top to bottom, Rogers Place is world class. It’s been designed to optimize energy performance and reduce our carbon footprint,” said Patrick LaForge, President & COO, Oilers Entertainment Group. “Rogers Place and the Oilers will lead the green movement in our city and in professional sports.”

Extensive energy modelling will be in place to reduce overall energy consumption and focus on efficiency. To reduce its carbon footprint, there will be heat recovery ventilation and central control of heating, cooling and lighting systems. Going above standard requirements, Rogers Place will have a highly insulated building envelope as well.

Water use reduction efforts will include low-flow plumbing fixtures and toilets throughout the arena and its plumbing design will minimize water usage by up to 35 per cent. According to Dr. Hershkowitz, this environmental effort is a complete win-win.

Being constructed as a compact and dense development, Rogers Place will be connected to the community with seven Light-Rail Transit (LRT) stops within walking distance, strong pedestrian connections and charging stations for electric cars in the arena’s parkade.

While entertainment and the environment might seem like an unlikely pair, if you go to a sporting event or concert and notice recycling bins, solar panels or recycled materials, then you start to realize how hand-in-hand the two really are.

According to Dr. Hershkowitz, there isn’t one big thing that we could do to solve global environmental concerns. Instead, he notes it’s the compilation of many small, but effective efforts that will lead to change.

With Rogers Place located in an energy-producing province, environmental excellence is a key pillar for both Rogers Place and its partner, the City of Edmonton. Its championing green initiatives while also looking to break out as the premier sports and entertainment facility in North America. A testament echoed by Dr. Hershkowitz.

“Rogers Place is a beautiful design and it’s confirming the fact that you can have beautiful, cutting-edge design and environmental efficiency working together.”

There’s no denying that Rogers Place will be an architectural gem in the downtown core with its modern design and world-class amenities, but its environmental stewardship will help ensure fans and the City of Edmonton have a premier facility to appreciate well into the future.