EDMONTON, AB – Home-ice advantage is something that Canada has yet to experience at the Hlinka Gretzky Cup since 1996.

But this August 6-11 at Rogers Place, that statistic will quickly vanish.

Players and staff of Sweden, Slovakia, Switzerland and hosts Canada took to the ice Sunday afternoon for their first official practices before dropping the puck on Group A action this Monday.

Canada entertains Switzerland at 7:00 p.m. MT after Sweden and Slovakia officially begin play earlier in the afternoon at 3:00 p.m. MT.

“It’s amazing,” said Canadian captain and Rimouski Océanic forward Alexis Lafrenière of his first experience inside Rogers Place. “The first time we walked downtown and came to the rink it was incredible. I think it’s one of the nicest arenas in the NHL and CHL, so it’s really nice to be here for this tournament.”


It’s a luxury that many current Oilers, including the likes of Zack Kassian, Ryan Nugent-Hopkins, Ethan Bear and Darnell Nurse, weren’t able to experience during their time playing in the national under-18 tournament.

“For the Canadians who get the chance to wear that crest on home soil with the support of their home country, it’ll be a nice treat for them,” Oilers defenceman and 2012 tournament veteran Nurse said.

The fans and atmosphere of Rogers Place provide the Hlinka Gretzky Cup with the entirely new dynamic of taking place in an NHL arena, in addition to being one of the league’s marquis facilities.

“Obviously the fans will be a bit better than when I was in Slovakia, but it’ll be cool to have it down on our turf because Canada is a passionate about hockey and there’s a lot of good players there to showcase their talent,” added Kassian, who wore the red and white for Canada at the tournament’s 2008 addition. 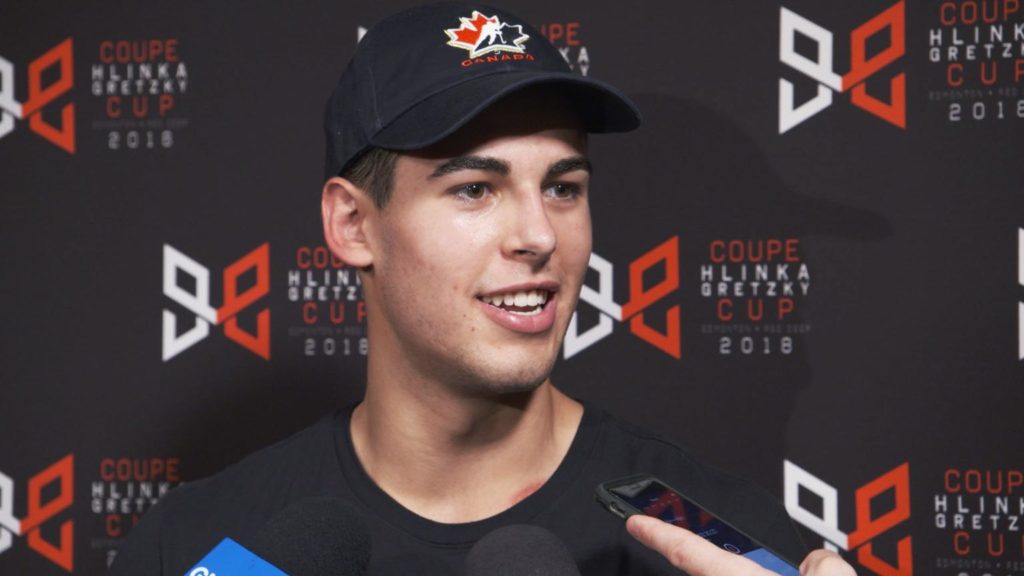 “It’s almost like playing in my backyard,” Robertson said. “It’s a great opportunity and can’t get much better. Some of them are in awe of the facility, and I still am. It’s such a great arena and one of the best in the world. Everyone’s just grateful we can play on home turf.”

Fort Saskatchewan, AB native Kirby Dach, a member of the WHL’s Saskatoon Blades, shared his experience of playing at the arena to teammates unfamiliar with the city and venue.

“We talked about it on the bus [Saturday night] coming up from Red Deer about what to expect,” Dach said. “We talked to the guys from out east about what it’s like playing here and how neat of an experience it will be for them playing in an NHL rink. I’ve played here three or four times in my WHL career and every time I come back it’s pretty cool. The atmosphere is great and the ice is a lot better than anywhere else.

“It’s an honour any time you can throw on the Canadian sweater, but to throw it on in my backyard is a pretty cool experience.”

Oilers forward Ryan Nugent-Hopkins, a gold-medal winner with Canada at the 2010 Hlinka tournament, remembers one of his first experiences competing in the red and white of Canada against the world’s top junior talent.

“It was the first time I really got to represent Canada, so it was a big honour and a great experience,” Nugent-Hopkins said. “It’s the first time where you see some of the competition. I know I played against a lot of players there at the World Juniors and now in the NHL, so it’s fun to see guys at that age.

“For sure the biggest memory I had was winning gold over there, so it was a fun tournament for me.”

With the Canadian crest comes expectation at the tournament, exemplified in Canada’s gold medals in nine of the last 10 tournaments. Head coach André Tourigny knows the opportunity to display their talent at Rogers Place this week against the world’s top junior talent is a stage his players are ready for beginning Monday.

Every time you put that jersey on, the pressure is on,” Tourigny added. “You have to live with it. I think we have to focus on what’s important now and what we have to do, and not focus on all the noise and what we can’t control.

“I think at any tournament where you wear the maple leaf, there’s pressure. We embrace it, we love it, and that’s what happens when you play for the best country in the world.”