It didn’t matter if you were an Edmonton Oilers fan or a Vancouver Canucks fan during the final night of their respective 2017-18 NHL seasons at Rogers Place.

On Saturday night, we all were Humboldt Broncos supporters.

The Oilers and Canucks — along with each of their fans and the extended hockey and sport communities — stood in solidarity for the victims of the tragic accident that claimed the lives of 15 and injured 14 on Friday.

The Broncos were en route to Nipawin, Saskatchewan for the fifth game of a best-of-seven series with the Nipawin Hawks in the SJHL Championship semi-finals before the crash occurred on Highway 35 north of Tisdale. The tragedy united the National Hockey League in remembrance, showing that no tragedy is greater than the game.

Bearing a special decal on their helmets with the Broncos logo circled with the words “Our Thoughts, Our Prayers”, both teams took to warm-up on an ice sheet lit green and yellow below a scoreboard bearing the colours of the Broncos. The Oilers logo on the clock mirrored the team’s name and colours.

On a night where signs paid homage to the careers of Daniel and Henrik Sedin, who played out the final NHL games of their illustrious careers, fans communicated their condolences and best wishes to the families and communities affected by the Humboldt tragedy.

Players circled centre ice alongside one another before puck drop for a moment of silence in memory of the victims as Oilers PA announcer Scott Bourgeois addressed the standing crowd before the final national anthem of the 2017-18 season.

“The roots that our game is built on run through these prairie communities and the impact of this loss is felt by all,” Bourgeois said.

“On behalf of the Edmonton Oilers and Vancouver Canucks organizations, we would like to send our sincere condolences to the young men, coaches, support staff, and families of the Humboldt Broncos and their community.” 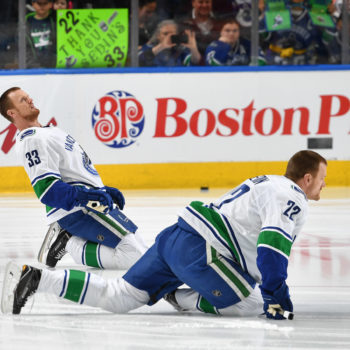 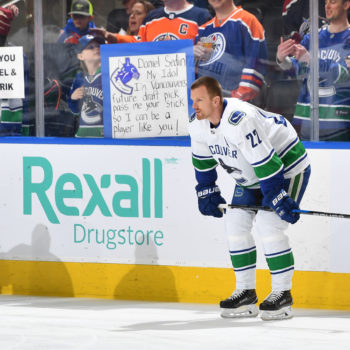 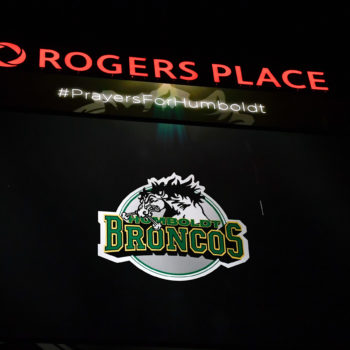 Oilers Entertainment Group echoed support given from around the league by donating 50/50 jackpot of $116,365 to the Humboldt Broncos in addition to a $25,000 donation to support families impacted by the tragedy.

“We are heartbroken by this tragedy and extend our deepest sympathies to the Joseph and Thomas family and all the families who have been devastated by the crash,” Oilers Entertainment Group CEO Bob Nicholson said in a release issued Saturday evening. “We also extend our sympathies to the Humboldt Broncos family and the community of Humboldt and offer our steadfast support in the aftermath of this tragedy and throughout the grieving process. We are united behind you.”

Post-game gave players, coaches and staff the time to reflect on what was an emotional night in Edmonton.

“You go to bed knowing about the tragedy and realize its magnitude when you wake up,” said Oilers head coach Todd McLellan. “Watching the games tonight around the league you realize the impact it’s had, then you throw in the last game of the season, an overtime and shootout combined with the Sedins, what they meant to the game and the performance from the fans, we’re tired.

“It’s been a day full of emotion.”