Leading the WAY at Rogers Place 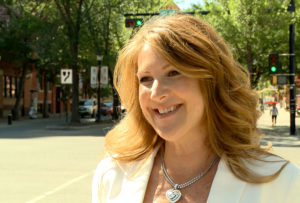 While other teenagers her age were getting part-time jobs at restaurants or at the mall, you could find Sheena Way working at a local Vancouver record shop, where she spent hours browsing the aisles and absorbing every album she could get her hands on.

Now Assistant GM, Live Entertainment for Rogers Place, Way got a taste for the music industry from a young age. Growing up in a family where music was “all around,” combined with her exposure to the wide variety of music at the record store, Way soon discovered her love for all types of music genres — from Joe Cocker to The Waterboys.

“It was fun — I loved it!” Way said of her first gig in the music industry. “It felt right.”

Unbeknownst to her at the time, this was only the beginning of an exciting career to come; one that would not only challenge her in ways she could have never imagined, but also provide her with some of the most memorable moments in her life.

The turning-point in Way’s career came when she was hired by world-renowned, Canadian “super-agent” Steve Herman, working for SL Feldman & Associates.

“I spent the next eight years of my career there learning how to groom talent, sell bands, talk to promoters [and] talk to venues.”

It was at this point that Way became fully captivated by the music industry — “I was hooked!”

“Then I went across the street to the promoter’s side.”

Way spent the next 11 years working with House of Blues, which was later bought by Live Nation, where she gained experience in sponsorship.

“The industry began to change a lot. People stopped buying records, CDs, they were downloading, artists were looking for new revenue incomes, so we started doing sponsorship.”

“You don’t see this every day.”

In 2010, a booking position became available with Canucks Sports and Entertainment for Rogers Arena; an opportunity Way welcomed with open arms. However, Way left Vancouver just shy of six years at Rogers Arena as the director of Live Entertainment to move to Edmonton with her husband, Mike McFaul, and help open Rogers Place.

“This was my opportunity and I went for it.”

“It’s the building itself, it’s the facility, but it’s also the whole leadership team behind it.”

It was not just her husband’s hiring as Assistant GM for Facility Operations of Rogers Place that was guiding Way to Edmonton, but also the opportunity to be a part of the team behind the new, state-of-the-art arena and the build-up to one of the leading live entertainment venues in North America.

“You just don’t get that opportunity— it’s once or twice in a lifetime, and this was my opportunity and I went for it.” 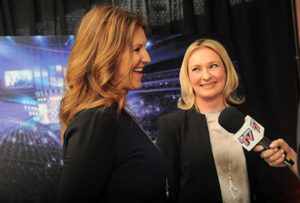 She added, “With the new GM, Susan Darrington, it was a really great opportunity to be a part of her team, to create something that hasn’t been here before and to create it at the best level we possibly can.”

Named as one of the Top 10 Women in Booking by Amplify Magazine, Way represents one of the most influential talent-buyers in Western Canada. From her background working as a teenager in a record shop to her years of experience booking some of the world’s biggest talent, Way not only brings with her a comprehensive understanding of the live entertainment industry, but also endless accounts from those pinch-yourself moments — like standing front and centre at a Bruce Springsteen concert. However, Way will be the first to tell you it’s not all fun and games — like when Ozzy Osbourne turned the foam hose onto the media pit, and she was faced with consoling a dozen angry camera personnel with damaged equipment.

It is this kind of unpredictability that makes working in live entertainment so exhilarating. Facing new challenges everyday — booking new acts, balancing a schedule from hockey, to concerts, to bull riding — Way meets these challenges with her vivaciousness and fervor to push boundaries.

“I want to really loosen-up that label and see what else is there, see what people want, try different things and bring it here.”

New to the area, Way has been spending her weekends studying the demographics and live entertainment scene in the Edmonton region.

“Since the venue is not open, every week I try to get to a different venue,” Way explained, saying she has visited places like the Myer Horowitz Theatre to the Northern Alberta Jubilee Auditorium.

“Edmonton has been pigeon-holed as a rock [concert] market, but I think there’s a lot more out there and we’re proving it!”

“I think there’s a lot more to this marketplace than [just] this rock label they’ve been given. I want to really loosen-up that label and see what else is there, see what people want, try different things and bring it here.”

Addressing the concerns for those still waiting to hear other concert genres announced for Rogers Place, Way laughed, saying, “Be patient, have faith!”

“What people don’t know is that I have a lot of shows booked throughout the year [covering] lot[s] of different genres. We just have to follow an announcement plan. So when the artist wants to announce, that’s the plan we follow.”

“It just so happened that we announced a whole lot of country, then we announced a bunch of hip-hop and we have lots of other things booked, you’ve just got to wait for it!”