Let there be light!

The new LED display lights up the north side of Edmonton Tower with Oilers colours.

Perhaps you’ve already seen it when you were driving in to work this morning or while walking to the game. Regardless, the 1,500 modules of LED fixtures installed on the north side of the new 27-storey Edmonton Tower is eye-catching to say the least.

“This is really just a series of the first couple of test pieces of content,” said Mason. “A large display like this takes a bit of trial-and-error.”

The new spectacle is approximately 140 feet wide by 70 feet tall, with 28 rows of lighting and close to 100 LED lights per row. Using sophisticated LED technology, the new installation is environmentally conscious and energy efficient.

Adding to the distinct contemporary feel of ICE District, this large-scale LED display is unique to Western Canada. 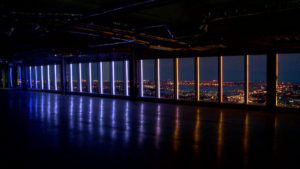 A view of the lights from inside Edmonton Tower.

“A big part of this vertical lighting element is to unify this building into ICE District,” said Mason. “This will be one of a series of buildings that will all have unique lighting, video or interactive elements.”

But what will be displayed after the testing is complete?

“There’ll be varying content, content for special moments in our city — there’s a lot still to come!” smiled Mason.

Besides the Edmonton Tower’s newest display, Mason explains how other cutting-edge technological elements are beginning to take shape around other parts of ICE District.

“Around our entire district we’re already starting to see large-scale, 85-inch double-sided video boxes popping up at street level (predominantly located on the south side of Rogers Place along 104 Ave), we’re seeing large LED displays on the corner of OEG’s offices and on the southwest corner of Rogers Place, and we have a substantial LED display facing into what will be our Public Plaza — opposite the Stantec tower.”

As part of the initial phase of ICE District’s digital deployment, Oilers Entertainment Group announced on January 10, 2017, that PATTISON Outdoor Advertising has been named the exclusive sales agent for ICE District out-of-home digital advertising — with advertising content premiering this month.

“You just want the excitement and the energy of knowing that you’re arriving at an experience or at a district.”

Unifying the buildings throughout ICE District using a harmonization of audio and visual elements, the anticipated two-million patrons visiting ICE District in 2017 can begin to watch as these new creative and innovative technologies come to life.

“You just want the excitement and the energy of knowing that you’re arriving at an experience or at a district,” added Mason.

Be sure to keep your eyes and ears peeled as ICE District continues to develop. You just never know what might be lighting up Edmonton’s skyline next!