Rogers Place touts itself as the soon-to-be most technologically enabled sports facility in all of North America. When the Edmonton arena opens its doors in 2016, fans will be treated to an unsurpassed level of engagement with technology at the forefront. In order to earn its self-proclaimed title as the top-tech dog, Rogers Place will be taking a page or two from Levi’s Stadium, home of the NFL’s San Francisco 49ers. 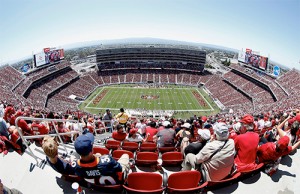 Located in Santa Clara, CA, Levi’s Stadium is a class above the rest when it comes to NFL venues. In the heart of Silicon Valley, the southern part of the San Francisco Bay Area that’s known for its high-tech industries, Levi’s Stadium needed to be as close to “future proof” as it could be.

“We set out to build a new stadium and position it as a facility and as a kind of statement of and for Silicon Valley and what it means. We understood from the ground up that Levi’s Stadium needed to be infused with the latest that technology has to offer,” said Brano Perkovich, Managing Director of New Ventures for the San Francisco 49ers.

The Levi’s Stadium design team took into account the need to reach fans at virtually every touch point. From the moment you pull out of the driveway on your commute to the stadium, you are connected. A mobile app allows fans to get directions to the stadium and surrounding parking lots on their phone. The app can direct you to the closest gate to your seats and your tickets are just a tap away.

“The focus has been on features that add value to the fan experience,” said Perkovich. “We spent a lot of time thinking about what does the fan experience look like today and how can we use technology to enhance it? What are the key pinpoints that an average fan, as they come to Levi’s, will want one day?

“From the day of the event, we wanted to make sure the fans have their tickets linked to their phones, they don’t have to worry about going to computers and printing those tickets out, making sure that they don’t lose them. Also, making sure we let fans know what the traffic patterns are leading to Levi’s Stadium and how to best and efficiently get to the parking lots. How to purchase parking passes so they don’t have to worry about getting the cash out and looking for parking spots.”

Once fans arrive at the stadium, they can scan their phones next to electronic readers. The process frees up employees to execute better customer service from the moment fans enter the gates.

“Our greeters now can be greeters,” said Perkovich. “You don’t have individuals who are staring and trying to scan your tickets three or four times. Each of our greeters has a tablet, which reads in real time who is coming through the gate. If I see that this is your 10th game at Levi’s or it’s your birthday, I can automatically and in real time offer you a discount, a special feature or special experience.”

Enhancing the experience. That’s what Perkovich said is the main focus of creating such a technologically advanced venue.

“We want to make sure that the experience our fans get is unsurpassed.”

In addition to helping fans get quickly in the door and to their seats, the mobile app can order food to either be picked up at an express stand or delivered right to any seat in the building. Perkovich said they make roughly 2,000 deliveries a game, which take approximately 6-9 minutes per order.

“When you think about the V.I.P. treatment, we give that to the entire stadium,” he said.

Another key wish of those building Levi’s Stadium, which opened in July of 2014, was to make it the most “connected” venue amongst a growing list of new-age sports and entertainment hubs. The stadium allows all 70,000+ visitors to connect to Wi-Fi and 4G networks. The stadium contains 1,200 access points with 600 serving the 45,000-seat lower bowl. There is one Wi-Fi router to serve every 100 seats, each spread throughout the stadium.

“We generally off-load between 2-2.5 terabytes of data. That’s almost twice as much as the last Super Bowl,” Perkovich said.

Can this be the kind of connectivity that Edmonton Oilers fans can expect when they attend games at Rogers Place? That appears to be the plan.

The new arena will have an extensive infrastructure to bring the latest and greatest technology to customers and will be fully wired for high-speed Wi-Fi. In addition to an advanced Wi-Fi setup and an unprecedented 13-year telecommunications deal with Rogers Communications, the arena will have the latest in other technologies as well, including one of the largest high-definition centre-hung scoreboards in the NHL and NFL.

Oilers fans will also be able to watch in-game highlights and stream video from unique camera angles within Rogers Place, enhancing the action on the ice.

While Levi’s Stadium has provided a blueprint and starting point for Rogers Place, Oilers fans can soon look forward to having one of the most technologically enabled sports and entertainment facilities right in their backyard.