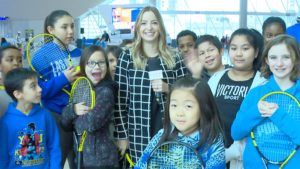 Hockey isn’t the only sport that’s seen the inside of Rogers Place lately.

Supported by Canadian Tire’s Jumpstart, Little Aces teaches kids how to play tennis, while providing a fun and affordable opportunity for students to participate in recreational extracurricular activities.

“It gives them an opportunity to do something different,” said Edmonton Little Aces Executive Director Mary Manley.

“It’s all about having fun. It’s about playing a sport and being active!”

With more than 20 mini tennis courts set up inside Ford Hall, Oilers Entertainment Group Chief Project Development Officer Bob Black said it was a day he has long been waiting for.

“They can say they were the first kids ever to play tennis in Ford Hall.”

“We designed this facility to have maximum program options and flexibility. Today is an indication of that flexibility within this facility and for the creation of vibrancy in our core,” said Black.

“I will tell you that today is a day I’ll always remember,” he added.

Black is not the only one who will not be forgetting the day’s event.

“It is a pretty big building!” said wide-eyed Isabella L’Heureux. The 9-year-old participant of Little Aces added with a beam, “It’s really fun.”

The day was wrapped up by a surprise visit from Hunter and a private tour inside Rogers Place.

“They can say they were the first kids ever to play tennis in Ford Hall,” Black said.

According to Black this is only the beginning, as OEG looks to bring more opportunities to involve the community and reinvigorate Edmonton’s downtown core through the development of ICE District.

“We will have a truly great capacity for events and we look to bring a lot of energy to downtown Edmonton,” said Black.

Previous Post
PCL ICE Level: The feature on 12 Days of Rogers Place
Next Post
VIDEO: 1-on-1 with PBR Athletes
Menu