Looking back on the journey

PCL workers were given a brief break from their rigorous construction schedule at Rogers Place to take a moment to marvel at the awe-inspiring work they have completed over the last two-and-a-half years.

On August 26, nearly a hundred workers who have been on the project since the beginning were handed a personalized Oilers jersey by none other than Oilers Entertainment Group CEO and Vice Chairman, Bob Nicholson, alongside Vice Chairman Kevin Lowe.

“Our relationship with PCL is very special and we’re so excited as Oilers Entertainment Group to be moving in here!” Nicholson said.

Lowe shared Nicholson’s gratitude, saying, “Thank you for everything you have done here.”

Proudly donning their new orange and blue attire, the PCL team gathered on the fresh sheet of ice at Rogers Place to take a team photograph.

The energy and excitement among the dozens of workers acted as a preview for what is to come when the fans finally fill the stands to cheer on the Oilers and Oil Kings.

As the PCL team wraps-up at Rogers Place, RogersPlace.com asks, what was your favourite memory from working on this historic project? 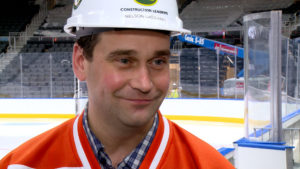 “It is a historic moment — I was born and raised here, watched the Oilers growing up.”

Favourite memory: The installation of the Oilers dressing room doors.
Most looking forward to: The winning seasons to come! 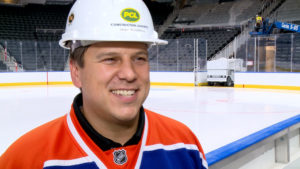 “The fact that I get to come here and work on this everyday has just been personally gratifying for me.”

Favourite memory: The event here today and getting to go out on the Rogers Place ice to have the group photo taken.
Most looking forward to: Sitting in his season seats! 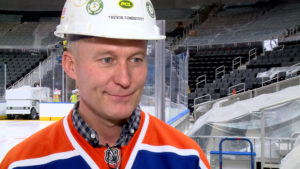 “I never thought in a thousand years that I would be part of building this project, but definitely glad that I was!”

Favourite memory: Breaking ground two-and-a-half years ago. And right now — watching all the finishes go in.
Most looking forward to: The first time he hears the crowd. 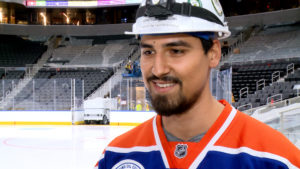 “This is a one-of-a-kind, historical project to be on.”

Favourite memory: The ice installation.
Most looking forward to: The upcoming hockey this season.

“My kids were excited when they heard I was on this job. Then they were disappointed because they thought I’d actually be building it with the Oilers players [laughs].”

Favourite memory: Standing on the roof and looking downwards when they were enclosing it.
Most looking forward to: Seeing how Edmonton changes and grows, and the excitement that comes with it. 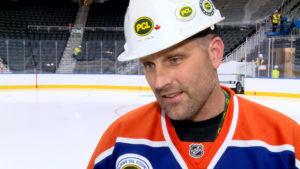 “It’s just been a thrill right from the beginning.”

Favourite memory: The concrete slab installation below the ice surface.
Most looking forward to: Relaxing, sitting back and taking it all in — and seeing that first game of course!