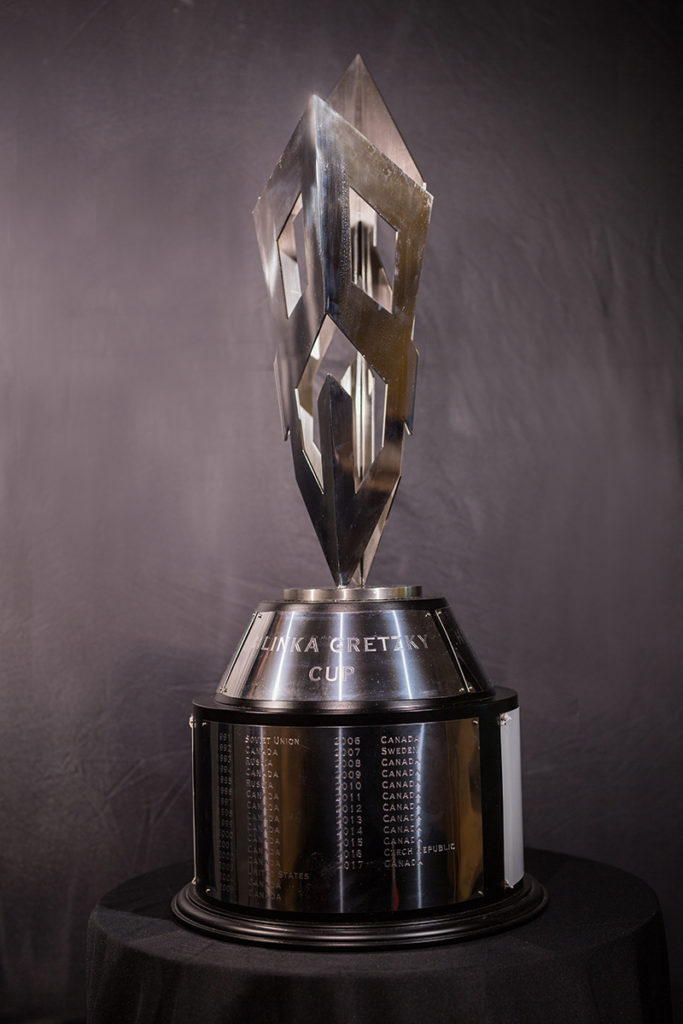 (Edmonton, AB) – Hockey Canada and Oilers Entertainment Group (OEG) unveiled the brand-new trophy for the recently rebranded Hlinka Gretzky Cup, set for Aug. 6-11 in Edmonton and Red Deer, AB. The trophy will be presented to the international best-on-best, under-18 tournament champions at Rogers Place in Edmonton following the gold-medal game on Aug. 11.

The trophy, which features the names of past tournament champions, will be touring around Edmonton with Hockey Canada and OEG representatives on June 26 and will visit local radio and television stations. Fans and media are invited to take pictures with the trophy on June 26 at 12:00 PM MT before it departs for Red Deer, where Hockey Canada and OEG representatives will bring the trophy to local radio stations and schools on June 27.

“This August hockey fans will have a rare opportunity to see the very best under 18 players from around the world in Edmonton,” said Oilers Entertainment Group CEO & Vice Chair Bob Nicholson. “This is your chance to say ‘you were there’ to witness the next generation of NHL stars before their draft year. We invited families, minor hockey teams of all ages and our great hockey fans to Rogers Place to cheer all the teams on and show the world how great a hockey city Edmonton is.”

“The Hlinka Gretzky Cup is a world-class event with a list of alumni that includes the likes of Sidney Crosby and Alex Ovechkin, and the unveiling of this unique trophy adds to the excitement currently surrounding the tournament,” said Al Coates, Hockey Canada’s executive director of the Hlinka Gretzky Cup. “We’re excited for fans to see the design of this trophy, and to host the premier under-18 players from around the world as they look to claim the Hlinka Gretzky Cup in August.”

A group of 44 players – four goaltenders, 14 defencemen, and 26 forwards – have been invited to attend Canada’s National Men’s Under-18 Team’s five-day selection camp, and will look to earn on spot on Team Canada and compete on home ice for the Hlinka Gretzky Cup. Canada won last year’s edition of the event in Breclav, Czech Republic, besting the host team 4-1, with a squad that included 18 players who were selected in the 2018 NHL draft over the weekend.

The camp is set for July 27-Aug. 1 at the Markin McPhail Centre at WinSport’s Canada Olympic Park in Calgary, and is free and open to the public. Following the selection camp, Team Canada will travel to Red Deer for a pre-competition game at Servus Arena vs. the Czech Republic on Aug. 4.

Fans who are eager to secure their seat to see Canada’s future NHL stars at the 2018 Hlinka Gretzky Cup can purchase an all-new, three-game Team Canada ticket package, which includes one lower-bowl Club ticket to each Team Canada preliminary-round game at Rogers Place, for only $99. Ticket packages will be available July 5 at HlinkaGretzkyCup.com. In addition, single game tickets for all games including the gold-medal game will go on sale July 5 at 10:00 AM. Tickets starting at $20.

“The new Team Canada packages provide fans the opportunity to experience family-friendly, affordable entertainment from the lower-bowl at an unbelievable venue, and to see the best Canadian hockey players under the age of 18,” said Dean McIntosh, vice-president of events and properties for Hockey Canada. “Many notable Hlinka Gretzky Cup alumni have gone on to very successful NHL careers, and this is a great opportunity to see Canada’s future stars compete on the international stage.”

At the 2018 NHL draft in Dallas, Texas, last weekend, 77 alumni of the event were selected by NHL Clubs – 19 first-rounders, in fact – including seven of the top-10 picks.

Hockey Canada also announced that Dodge will be the presenting partner for the 2018 Hlinka Gretzky Cup. Dodge will hold the rights to marketing and event activation at the tournament, and the event will see a number of in-game giveaways and promotions at both Rogers Place in Edmonton and Servus Arena in Red Deer.

As with all Hockey Canada events, net proceeds from the Hlinka Gretzky Cup will remain in the host province to support the growth of the game and grassroots hockey initiatives. Hockey Canada and the Czech Hockey Association, along with the Slovak Hockey Federation, have partnered to bring the event to Canadian ice in 2018, 2020, and 2022. The regional economic impact of hosting the Hlinka Gretzky Cup could top $5 million based on the results from hosting similar events of this size and scope.