Oilers continue to foster a culture of change

The Edmonton Oilers held their second annual Hockey Is For Everyone night as they welcomed the Colorado Avalanche to Rogers Place, Thursday.

As the players made their way down the tunnel, fans noticed they were sporting a familiar rainbow of colours on their hockey sticks, having wrapped their blades in Pride Tape for the pre-game warmup.

Symbolizing the message of inclusion, pride tape is a small piece to a larger movement that has now come to be known as the NHL’s Hockey Is For Everyone month.

An annual campaign that is supported by all 31 NHL clubs, Hockey Is For Everyone focuses on awareness and activities with organizations that celebrate all people who play or watch hockey, including fans of every race, colour, religion, national origin, gender identity, age, sexual orientation, socio-economic status, and ability.

In support of the February, month-long initiative, the Edmonton team hosted a Hockey Is For Everyone Panel on Wednesday in the Oilers Hall of Fame Room.

Hosted by former Oilers Captain and NHL Hockey Is For Everyone Ambassador Andrew Ference, it featured a gathering of community leaders in diversity and inclusion.

“Pride Tape has been embraced across the game of hockey, all the way from the pros down to minor hockey,” said Ference, who was a driving force in the Oilers becoming the very first NHL team to use it during the 2016 Oilers Skills Competition at Rexall Place.

Designed by Calder Bateman and the Institute for Sexual Studies and Services in support of the You Can Play Project, a non-profit committed to supporting the LGBTQ2 community and fighting homophobia in sports, Pride Tape is seen as a sign of solidarity that LGBTQ2 players will be accepted in hockey at all levels.

“It’s a powerful vision of our game’s cultural acceptance, and that culture of acceptance has evolved from the early days of Willie O’Ree breaking into the league with Boston, to more recently, when the Burke family brought You Can Play into our locker rooms,” said Ference.

For Leiha Crier, in some cases, the sport even rallies communities together. 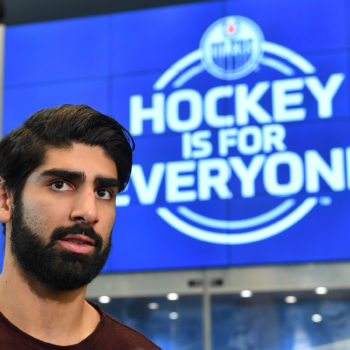 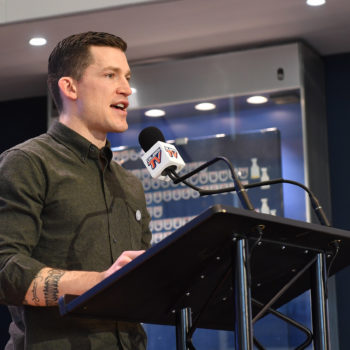 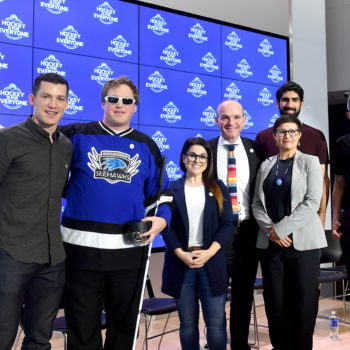 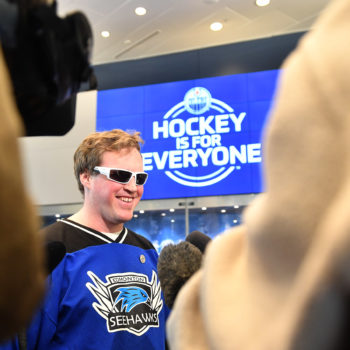 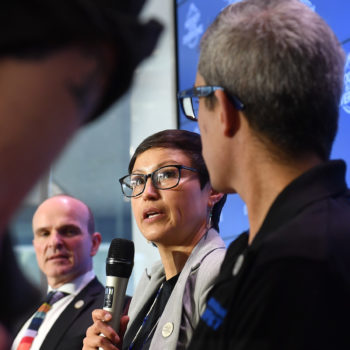 “I come from the community of Maskwacis, and for us in Maskwacis, hockey is huge,” she said. “We probably have around 20 teams in terms of hockey and organized sport.”

The former collegiate hockey athlete at the University of Denver said she grew up loving what the sport had to offer. She went on to become Coach of Team Alberta for National Aboriginal Hockey Championship after leaving her post as President and Coach of Maskwacis Minor Hockey.

“It’s really brought the community together,” said Crier. “Some of the adversities that we’ve gone through…over the years, I’ve seen it get better in terms of inclusion. I think hockey has a really powerful energy about it that it brings anybody.”

Dr. Cheryl MacDonald, a post-doctoral researcher at the University of Alberta in the Institute for Sexual Minority Studies and Services and co-chair of the Canadian Western Board for You Can Play, believes that supporting a movement such as Hockey Is For Everyone is a huge game-changer for youth and building communities.

“I think that for anyone to see their idol make clear that not only are you welcome in your sport but in a way you’re both the same, you’re both able to play hockey,” she said.

“Recent research shows that kids who identify as minorities, be it racial or ethnic or from the LGBTQ2 community, they don’t always feel the most comfortable playing in their sport, so they quit. We don’t want that, that’s exactly what we don’t want. I think it’s important to focus on youth to make sure that they know they’re included and welcomed in their sport and they can have fun just like anybody else.”

As the Oilers Hockey Is For Everyone night unfolded at Rogers Place, a rainbow of colours was projected onto the ice while the youth Scotiabank skating Flag-bearer lapped the rink, waving the symbolic pride flag.

Gathering at centre ice to assist with the traditional puck drop were several members from the Oilers Hockey Is For Everyone panel, including Lorne Webber, Captain and one of the goaltenders for the Edmonton SeeHawks, the city’s only blind hockey team.

“[This initiative] is a sign to me that the sport that I love is [recognizing] many different people from many different backgrounds and ability levels and [encouraging] us to play the sport that we love,” said the 35-year-old, who began losing his sight at the age of 10 when it was discovered that he was suffering from a condition known as retinal detachment in both of his eyes.

Webber, who over the course of six years would have 19 surgeries that tried to correct the detachment, would eventually lose his sight altogether at the age of 16, but not his passion for the game.

“[Hockey Is For Everyone] is an opportunity for me to introduce people to the sport that I have been playing already,” said Webber.

“What I hope it can mean, is that perhaps other people that have never heard of blind hockey before and might have, maybe be visually impaired themselves or know a relative or friend who’s visually impaired can see that and be introduced to something that they have never seen before.”

As the evening’s events unfolded on the rink, the Oilers Ladies and Edmonton Oilers Community Foundation (EOCF) could be found stationed around the arena concourse selling exclusive, limited-edition Hockey Is For Everyone mystery pucks that were individually signed by Oilers players.

Fans could be found strategically trying to pick their puck and eagerly unwrap them to see what signature awaited them. Funds raised from the annual event would support the EOCF and You Can Play Project.

“Hockey Is For Everyone is a wonderful opportunity for fans of any race, colour, socioeconomic status, gender, really an opportunity for inclusiveness in our game,” said Natalie Minckler, Executive Director of the EOCF.

“We’re very fortunate to have Jujhar Khaira as our [Oilers] Ambassador for Hockey Is For Everyone. He’s a wonderful spokesperson for the cause, he participated in our panel yesterday and spoke very eloquently about the importance of having youth and ensuring that youth feel welcome.”

Fans were encouraged to get in on the action by sharing their experiences of respect and inclusion on and off the ice on social media using the official hashtag #HockeyIsForEveryone, as well as show their support by bidding in the EOCF’s Hockey is for Everyone Online Auction that is open from now until February 27.

As the Oilers continue to celebrate its second year embracing the Hockey Is For Everyone campaign, Khaira believes it’s a movement that encourages any and every one to get involved.

“I think it’s a strong message that everyone in the league feels strongly about,” said Khaira.

“It doesn’t matter who you are, whether you’re LGBTQ, if you have disabilities, this is a game that brings everybody together. If we can have an impact on just making someone take that extra step in enjoying the game or give them a little bit more confidence coming to the game…I think that’s the biggest thing.”