(Edmonton, AB) –The 1984-85 Edmonton Oilers faced tough competition to win the Stanley Cup and over three decades later they prevailed once again as they were voted the “Greatest Team of All Time” as part of the NHL’s 2017 Centennial Celebrations. In recognition of this significant distinction, Oilers Entertainment Group (OEG) announced today a very special public event will take place at Rogers Place on Sunday, February 11, 2018. Wayne Gretzky, Mark Messier and their 1984-85 teammates will host an intimate and interactive evening of storytelling and unique multi-media vignettes that will recount their journey to legendary status atop the list of greatest teams in NHL history.

Demand from Oilers fans is expected to be very high for this unique, smaller-scale evening in the bowl of Rogers Place. To provide fans the fairest possible access to tickets, the Oilers have introduced a Ticket Priority Draw at EdmontonOilers.com/GreatestTeam. Effective immediately, fans can sign up at no cost for the opportunity to purchase tickets. The deadline to enter the Priority Draw is Wednesday, November 15, 2017. A random draw will be held from all the Priority Draw entries and those selected will be provided the opportunity to secure seats to this unique event. Seating will be reserved and will start at $85 per seat. Full details on the event will be announced prior to the seat purchase window.

Net proceeds from the event will be directed toward the Edmonton Oilers Community Foundation (EOCF) who will establish a legacy endowment in the name of legendary Oiler and member of the 1984-85 Championship team Dave Semenko, who passed away in 2017 after a brief but courageous battle with cancer.

“It is an amazing honour to be voted greatest team by NHL fans, something we don’t take lightly, respecting the great history of the game and legendary teams who made their mark on the League,” said Oilers Entertainment Group Partner and Captain of the 1984-85 Oilers, Wayne Gretzky. “We are excited to share this with our fans and get the team together, which is all the more fitting to do in Dave’s memory.” 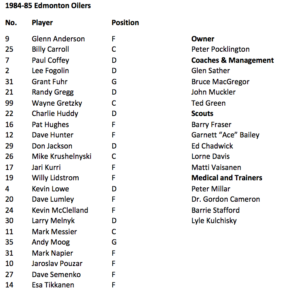