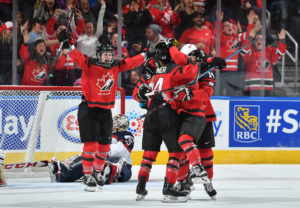 That’s what pushed the Canadian National Women’s Team to their fifth and final straight victory against Team USA in the Canada-US six-game exhibition series.

Thanks to an aggressive advance on the Americans net by Canadian forward Jennifer Wakefield, the Canadians sealed a 2-1 overtime victory.

“It’s a huge moment,” said Wakefield. “I’m really excited. I think it’s a bigger win for the team than an individual win, [Natalie] Spooner made a really nice play and I was just able to bury my head and put it in. It didn’t really take much talent, but I’m just happy to be there at the right time.”

It couldn’t have been a more fitting ending for the well-acquainted national teams.

“Knowing the work that we put in every day, knowing that we play so many games and having that last win under our belt feels pretty good, especially on our home soil here in Edmonton, full crowd, it was quite special.”

Less than five minutes into the game, Team Canada advanced with a three-on-two as forward Jillian Saulner pushed past the US defenceman, but was unable to get a shot off as it was poke-checked away.

The Americans responded less than a minute later when forward Jocelyne Lamoureux-Davidson fired a shot from just outside the paint but Szabados firmly denied the opportunity, snatching the puck from the air.

The Canadians continued to gain momentum as Spooner fired off two shots within a minute of one another. The first tipped high by Team USA goaltender Maddie Rooney, the second just wide of the net.

As Team USA prepared to counter, Team Canada forward Sarah Potomak intercepted the play to push the puck up to Spooner who crossed it in front of Rooney’s net, but the Canadians were unable to finish.

As Team Canada continued to advance the Americans would only respond.

With less than 10 minutes remaining in the first, Team Canada forward Melodie Daoust rang off a shot from the blueline, but it dribbled just wide of the net.

A loose puck in front of Szabados’ net had the Canadians scrambling, but the veteran netminder held her position firmly, tight to the post to prevent the puck from slipping through.

“I thought she did a really good job with her rebound control, really settled things down when we needed to get settled down [and] was able to cover pucks up and get some whistles for us so that we could get some changes. She’s such a smart goalie. It was great to have her.”

With less than three minutes remaining, Canada capitalized on a two-man advantage when blueliner Rebecca Johnston slid a pass to Team Captain Marie-Philip Poulin, who one-timed a shot from the top of the blueline to earn the Canadians a 1-0 lead.

“It was pretty tight,” said Poulin. “I think every game we play against them we know is going to be tight. Every battle — we’ve got to win that. Obviously, they have a great team, and we respect that, but we wanted to get that win here in Edmonton and having that overtime win at the end of that series feels pretty good.”

The Americans were on the hunt for their first goal as shot after shot rang out early in the second period.

Canada was put to work on the penalty kill after defenceman Micah Zandee-Hart received two minutes for tripping, granting Team USA their first man advantage of the night.

Continued focus by Szabados denied an air-born puck from crossing the goal line as a scramble ensued in front of her net. Daoust responded with a wraparound on Rooney but was unable to penetrate the goal line.

With less than 10 minutes remaining, the Americans kept advancing, with forward Hilary Knight dropping a backhand pass to linemate Brianna Decker, who fired it high over the net. Moments later, American forward Meghan Duggan followed up with a shot from the slot but was stymied by Szabados once again.

With 5:58 remaining, Knight finally found the back of the net to tie the game 1-1.

The third period was for all the marbles as the intensity continued to climb between Team Canada and their neighbours south of the border.

Team Canada started the period with a 20-second power play after American forward Amanda Kessel tripped Johnston with less than two minutes remaining in the second.

Unable to capitalize on the power play, the man advantage switched to Team USA as Spooner was sent to the box for tripping, followed by Blayre Turnbull 10 minutes later for delay of game.

Adrenaline was at an all-time high, as the Olympic-level play headed into overtime.

Though opportunities continued to develop for both teams, it was Wakefield that solidified the 2-1 overtime win with just 27 seconds remaining.

With a suspected goalie interference, the play came under review, but the officials were met with cheers from the 17,468 fans in attendance as they confirmed it to be a good goal. 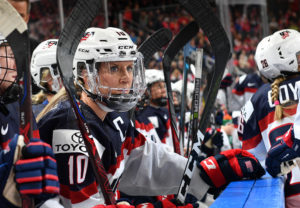 “[We] came up short tonight and the other night, but I thought actually, as a team, we played well tonight. Did a lot of good things, made them work for that one, but we’re hungry, we’ll go back to the drawing board — a few things we’ve got to clean up in order to close out a game — but that’s on us and we should be ready to go in less than two months.”

Tonight, marked the eighth and final meeting between the U.S. and Canada leading up to the PyeongChang 2018 Olympic Winter Games, and the sixth and final game in the six-game exhibition series, which saw the cross-border rivals play three games in each country, the first commencing on October 22 in Quebec City.

Though it was a slow start to the series for Team Canada, with Team USA securing a 5-2 win to start the series, the Canadians turned it around and took a commanding 5-1 victory in their second meet-up on October 25 in Boston, Mass.

“I think you can see the progress, I think that loss in Quebec City, that’s not what we wanted,” said Poulin.

“So I think, knowing that we’ve improved, knowing that we made some adjustment, it pays off at the end. We’ve got to keep going, we know they’re going to do the same on their side.”

The women’s ice hockey tournament will run from February 10-22, where eight nations will compete. Canada will be looking to earn their fifth straight Olympic gold medal since first winning in Salt Lake City.