PBR brings the heat to Edmonton

“All roads lead to Edmonton!” 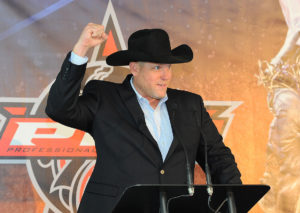 “Edmonton has a rich history as a western lifestyle [city] and we are excited to bring some heat to Edmonton in November [2017],” Gleason added.

Celebrating its 23rd year as a bull riding-only competition, Gleason said PBR is eager to bring its adrenaline-charged spectacle to Northern Alberta.

“Edmonton is going to have an opportunity to see the best bull riders of the world compete,” said Gleason.

“It’s going to be a truly nationalistic event.” 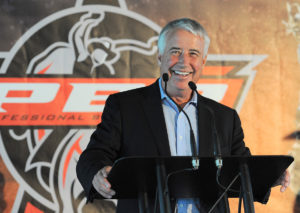 “It’s about partnerships,” said OEG Vice Chairman and CEO Bob Nicholson, expressing his gratitude towards the city of Edmonton as well as WME | IMG for helping to PBR to Rogers Place.

“OEG is excited to bring PBR action and excitement to Edmonton in 2017 and beyond. We are committed to growing the event into a unique sporting spectacle for PBR fans in Canada and across the world, while bringing new energy to the western lifestyle festival that will welcome fans and neighbours from across Alberta and Canada.”

Capping off this festival, the PBR events will run November 10-12 and will be broadcasted on TSN.

“Something like this has never really been done before.”

“Something like this has never really been done before [in Canada],” said three-time PBR Canada champion Aaron Roy.

Roy found out first-hand just how intense the sport of bull riding can be, suffering a severe injury in 2013, dislocating and fracturing his back. 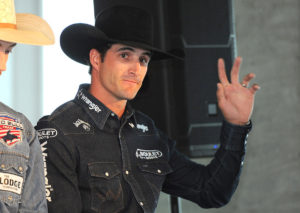 “It was a long six months of physio,” he said.

But Roy did not let his past injury stop him from riding. He returned a week before the Finals, ultimately being crowned 2014 PBR Canada champion.

Overlooking Rogers Place from the EPCOR Tower on Wednesday, Roy added, “this is the first time I’ve seen this arena and it’s something else… it’s going to be really exciting to be in there!”

Roy is one of many athletes excited to compete inside Edmonton’s new state-of-the-art facility.

“One of the reasons we are excited to be [coming] here is because this is honestly one of the best arena complexes — and I see all the arenas around the world!” Gleason said.

Beginning with the PBR Canadian Finals on November 10, the top Canadian rider in the PBR Monster Energy Canada Series will be crowned the national champion inside Rogers Place. November 11 and 12 will be an Open Invitational showcasing 40 of the world’s top bull riders — including number-one ranked riders from PBR Mexico, Australia, and Brazil.

“The fans will come out and really cherish this event.”

With events in six countries, including Canada since 1996, PBR is one of the fastest-growing sports amongst fans.

“PBR is now one of the 10 most popular sports in the U.S. and is now available in nearly half a billion homes around the world,” Nicholson commented.

Debuting in Ottawa on August 20, 2016, the PBR Monster Energy Canada Series will be the country’s first fully-televised national professional bull riding series. The tour will lead back to Edmonton to crown the PBR Canada Champion.

“The fans will come out and really cherish this event,” Nicholson said.

“This is the first stake in the ground for western lifestyle festivals [to come].”

More details regarding this new 10-day western lifestyle festival will be made available on RogersPlace.com closer to the event date.