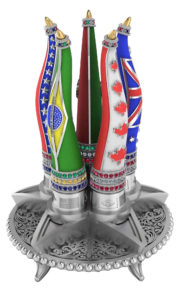 At the most important international bull riding competition in the world, athletes of the Toughest Sport on Dirt! will compete for the very ground on which they battle. Similar to “The Ashes” in Cricket, the symbolism of something as common as native soil is the object of national pride and a prize worth more than money alone.

The PBR Global Cup trophy is made up of five individual parts, each specifically customized to the territory it represents (color, flags, branding, gems, national icons). Together they create one of the most unique prizes in all of sports. More importantly, each piece of the trophy is a “vessel” designed to hold the dirt of that very country. The dirt, gathered from the states and provinces of each individual territory, comes together to represent the sacred soil of each country.

The pieces of the Global Cup Trophy also become the centerpiece of each event. Symbolic opening ceremonies will feature the riders from the host country deposit the soil from their piece to signify the start of competition. The battle ensues on this dirt while the vessel awaits the winner to reclaim the soil and retain the Horn as champions of the event.

Once a team possesses all five Horns, that trophy is fused together to forever signify that countries world dominance and a new trophy is created.