Putting the ice to the test

It has been less than four months since the concrete pour for the ice slab was installed at Rogers Place. Laying the foundation for what will soon play host to many memorable moments to come, the team at Rogers Place has begun some of the final steps before opening its doors, including testing the ice surface itself.

“This is the final testing stage as far as the ice goes.” 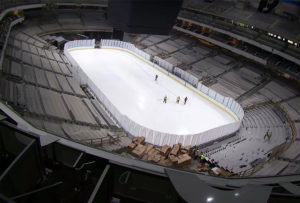 JJ Straker, Supervisor of Ice Operations for Oilers Entertainment Group (OEG), commented on the test ice saying that it is the same process as installing NHL-quality ice, just without the “lines and logos.”

“The process here — it’ll be similar to how we do it for real in August.”

But what does that process entail?

First, a fine mist is sprayed evenly across the surface in two to four layers, allowing each layer to reach the appropriate temperature. Following the mist, Straker explains how white paint is then coated across the surface — approximately three layers — followed by additional layers of mist.

“Then back to the water again!”

For NHL quality ice, the process usually takes the ice makers 200 trips back-and-forth across the rink.

The logos and lines are usually painted on right after the white coat is sealed in, but for test purposes all that’s needed is a clean white surface to ensure the lighting is just right for fans and media.

“The lighting guys with the NHL will be in to make sure everything’s pointing properly and there’s not too many shadows [on the surface],” Straker added. “Then once that happens we’ll take [the ice] out after.”

The test ice is approximately one-half to three-quarters of an inch in depth — too thin to skate on, but thick enough to serve its purpose during this test. When it comes to the real-deal, the NHL game-ready ice will be between one to one-and-a-quarter inches thick.

“A new building like this, it’s never been done here before so we want to make sure everything’s working properly from the plant to the slab and everything cools and freezes properly and there’s no dead spots [on the slab],” Straker explained. 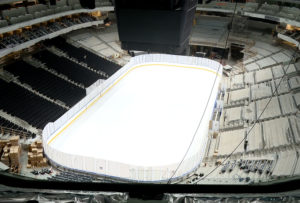 A view of the test ice at Rogers Place from the Upper Concourse.

The ice plant controls both the main rink and the community rink. There are four big screw compressors that keep the ice frozen by chilling the concrete slab below the ice surface. Two compressors work at one time, while the other two are kept for backup.

Straker says the ice testing process is going smoothly and they are on track to make the NHL ice come August.

“This is the final testing stage as far as the ice goes.”

Straker is the new “head ice guy” at Rogers Place. He started in April after spending three years making ice for the Phoenix Coyotes.

“Before that, I did the ice in Vancouver for the Olympics with Dan [Dan Craig, NHL’s Senior Director of Facilities Operations/Hockey Operations] and his team, and that’s where my big break happened I guess you could say,” he explained. “I know him very well and he’s helped us a lot.”

Craig is known world-wide for his ice making. He was the head ice maker for the Oilers for 11 years and helped the franchise earn the reputation of having “the best ice” in the League.

“Edmonton, we’ve always been the best, we will always be the best and that’s the way it is,” Craig said back in March at the concrete slab pour.

For Craig, ice making is a team effort; that’s just one of many tips he has passed down to all those he’s worked with, including Straker.

“One thing I take pride in is making sure knowledge is exchanged for the future,” he said.

“It’s going to be tough shoes to fill, but we’re up to the task,” Straker added.

Craig will join the new ice team at Rogers Place this August for when they make the NHL ice, complete with the lines and logos.