Rogers Place hosted a special guest this week, with NHL Commissioner Gary Bettman visiting the new arena for the first time since opening its doors. Community Reporter Jessica Kent sat down with the Commissioner for an exclusive 1-on-1 earlier this week.

Jessica Kent: This is very exciting for Rogers Place! You actually haven’t been here since Rogers Place was under construction, what do you think?

Gary Bettman: It is spectacular. The vision that Daryl Katz had for ICE District and this arena was phenomenal to begin with and I think this actually exceeded everybody’s expectations. It’s just a wonderful facility and a wonderful project that I think will transform Edmonton for decades.

JK: I know you had such a big part in pushing for the arena to be built, why was it so important to you that the Oilers get a new home?

GB: Northlands had past its due date, they needed a new arena. And if this team was going to survive and thrive at the excellence that the great fans in Edmonton expected and deserved, they needed a new home; and to be able to do it in the context of really transforming downtown, just made this project even more special and even more important. 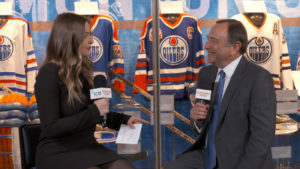 JK: What kind of impact do you think Rogers Place and ICE District has had on the team?

GB: I don’t know if you can ever parcel out one thing. They do have a fair amount of good, young talent, but playing in a first-class, state-of-the-art environment certainly let players raise the level of their game and since it looks like the team is going to have a season that is better than any season we’ve seen in recent time, maybe it’s a coincidence, or maybe there’s a cause-and-effect.

JK: Do you think other teams are taking notice of our arena and what we have to offer here in Edmonton with ICE District and this building?

GB: My understanding is that people in sports — in all sports — are coming here to study, examine, and marvel at what has been accomplished here because it has been nothing short of phenomenal. Not just at 10,000 feet, when you walk through this arena and you see the level of detail that has gone into every element of making this such a special place, it is truly an extraordinary, extraordinary arena.

JK: What is your personal favourite part of Rogers Place?

GB: Well, when you see Ford Hall your breath is taken away.

JK: Could we ever see any NHL events come here to Rogers Place?

JK: Is there anything you’d like to say to Oilers fans?

GB: Edmonton has always been a great hockey town. There have been periods of difficulty and frustration, but the great ownership that Daryl Katz has brought to this team, his vision for the city, makes the future extraordinarily bright and we couldn’t be more proud on behalf of the NHL, and more excited for the city of Edmonton and the great fans here.