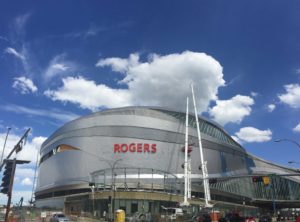 Those were the words of an enthusiastic passerby near 104th Street and 104th Avenue on Tuesday, June 21.

Last week the Rogers Place exterior lettering installation began on the Southwest corner of the new arena, beginning with the letter — you guessed it — R.

As the 10-foot-tall letters were raised and installed over 60 feet above 104th Avenue, Marley Duffield, PCL Assistant Superintendent, explained the significance of this project.

“I would say it’s a huge milestone — conquer[ing] a big portion of the project like [this] is huge for everyone.”

Duffield said this is not only a milestone for those working on the project, but also an exciting day for the public.

“Anyone who has walked by has stopped and taken a photo.”

“We’re pushing to the finish line.”

Although there has been significant change occurring inside the building, most of that change will remain a surprise to the public until the Open House on September 10.

“It goes a long way, seeing the big stuff change on the outside, that we’re one day closer to getting everyone inside,” said Duffield.

As PCL nears its final completion of Rogers Place, their attention has shifted to some of the finishing touches — including the exterior details of Rogers Place.

Besides the signage, landscaping around the arena has been ongoing — from the roadways, to building curbs and sidewalks, the exterior finishes of Rogers Place are now coming together.

“We’re pushing to the finish line,” Duffield added. “Everything counts at this point. Every day counts!”

Missed the installation? Watch the time lapse video of the letters being installed.

Previous Post
GALLERY: Rogers Place Signage
Next Post
WEEKLY BLOG – Out with the old, in with the new