Take me out to the… hockey game! 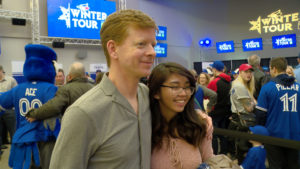 Despite the lack of peanuts and crackerjacks, Toronto Blue Jays Sportsnet host Jamie Campbell said he was in his element at Rogers Place last weekend.

“I used to live here in Edmonton, so I’m just absolutely thrilled to be here!” he said while standing inside Ford Hall on Friday. “It’s sort of my second home.”

Arriving in Edmonton, one of the three stops made by the Blue Jays during their seventh annual Winter Tour, Campbell was joined by Blue Jays players Aaron Sanchez, Marco Estrada, Kevin Pillar and Devon Travis for a fan autograph session ahead of the weekend.

“We just got here but from the looks of it, it’s unbelievable.”

“We just got here but from the looks of it, it’s unbelievable,” Pillar commented during a media availability held earlier that evening inside the Oilers Hall of Fame room.

The players then moved upstairs for the autograph session where they were met by hundreds of excited fans lined-up inside Ford Hall. The ticketed event was offered to fans through a lottery earlier in the month, with proceeds benefiting the Jays Care Foundation.

Even a local Edmonton celebrity was in attendance. 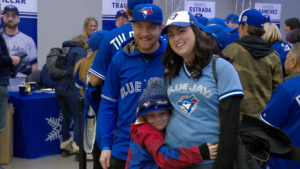 ‘Spider-Mable’ joins her friends for the Blue Jays autograph signing on Friday evening.

“It’s awesome because I get to come to one of my favourite buildings [Rogers Place]! I really like coming here and I was so excited to see the Blue Jays and come with my friends,” said Mable Tooke.

Tooke, better known as ‘Spider-Mable’, is recognized around Edmonton for her day-long adventure as a superhero fighting crime — a wish granted by the Children’s Wish Foundation on September 28, 2015.

Although she may have since retired her alter ego’s costume, the young cancer survivor has not lost her spunk.

“I’m really happy to be here,” she beamed. “It was really cool getting my hat signed!”

For a venue that is accustomed to a passionate gathering of orange and blue, the cheering crowd sporting Blue Jays gear felt just as welcomed inside the new arena.

But the Blue Jay fever didn’t end there.

“It’s a place that people should really be proud to live.”

On Saturday, January 14, the Blue Jays joined the Edmonton Oilers in a jersey exchange before watching a classic Battle of Alberta.

“Edmonton’s been great to us. What a beautiful place, we’re excited to be here,” Pillar said to the Oilers crowd during a TV time-out.

An Oilers fan himself, Campbell added, “Edmonton’s vibrant. Edmonton’s got something and I wish more people in this country knew that. The shopping, the places to go, to eat, to socialize — it’s a place that people should really be proud to live.

“My heart is with the Oilers and always will be.”

The Blue Jays will head to Toronto next before wrapping up their 2017 Winter Tour. As for their visit to Edmonton — the Jays can be confident that their invite to Rogers Place remains open.

Part 1: On Day 3 of #WT2017 pres. by @TD_Canada, we visited @RogersPlace, swapped jerseys w/ @EdmontonOilers & made friends at @StolleryKids pic.twitter.com/1V1JsjjNrt