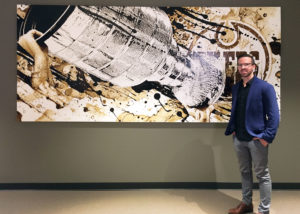 Lucas Seaward with his work of art.

“I had no idea originally where it was going to be located. The focus was to do a piece that was close to the Oilers organization.”

These were the words of Edmonton artist Lucas Seaward, as he viewed his painting that hung inside the doors of the Oilers Dressing Room.

To Seaward’s surprise, his artwork could not be any closer to the Oilers themselves.

“To have it so close to the Dressing Room, which the players will see on a semi-daily basis, means the world to me,” said Seaward.

When you first walk into the Oilers Dressing Room, you will see five Stanley Cups prominently displayed on a large mantel — with extra space on the far right side, hoping to someday be occupied by another Cup. Hanging on the wall to the right of this spectacle is Seaward’s sepia-toned masterpiece.

At 12-feet wide by 5-feet tall, the artwork displays the Oilers logo, with hands hoisting an oversized Stanley Cup in the foreground.

“I grew up in Edmonton and I was not fortunate to be at an age to fully appreciate the early Oilers dynasty team in the ‘80s,” said Seaward . “What I did benefit from was the legacy they had left, as well as the impact on the athletic community.” As a young athlete, Seaward said, “your imagination runs wild. You can see yourself hoisting the cup.”

Inspired by the visions of his youth, Seaward hopes this piece shares those same visions with others.

“That’s what inspired this particular piece and that’s why there’s no definitive person identified in the piece,” explained Seaward. “Not only were a number of players and staff involved over the years during the dynasty, but in following that, the youth and the community around Edmonton got to feel the benefits of that championship spirit.”

Besides his Oil Country upbringing, there is also a special Northern Alberta element brought into Seaward’s artwork.

“Growing up in Edmonton I heard a lot of controversy about Northern Alberta and the development of the oil sands, and so I took an opportunity to go up there and see it first-hand,” said Seaward.

Identifying the value of the Northern Alberta oil sands, Seaward explained that he hopes to merely begin a conversation among people regarding conscious usage of fossil fuels — and he hopes to inspire this conversation through his artwork.

Working with the viscous, heavy oil presents many challenges for the ambitious artist. For one, Seaward must wear hazmat protective equipment and work in a well-ventilated area while he paints.

In order to make the oil easier to work with, the artist mixes the raw bitumen with a binding agent to dilute it. Then he applies the mixture in multiple layers on his canvas, creating the desired hue.

“It took almost two months to complete,” Seaward said while he admired the finished result hanging in the Oilers Dressing Room.

A piece that he has aptly named “Hoisting the Cup,” the artist reiterates that the hands pictured are not identified or modeled after anyone in particular.

“Naturally someone could assume it’s Gretzky or Messier, or one of the coaches,” said Seaward. “But to make all of this happen, it [the hands holding the cup] could be the fans.”

“There’s a lot of invisible people behind-the-scenes that help get a team to the point where they win a championship, and that’s why there’s no particular person involved with The Hoist — it could be any one of us.”

From sparking conversations surrounding fossil fuels, while commemorating the dynasty years of the Oilers, Seaward’s painting may also be inspiring a future vision for those who pass by it.