The Canadian Women’s National Hockey Team has a message for all the young, aspiring female hockey players out there: We see you.

“I think every time we jump out there we feel the crowd, we hear the crowd, I think it gives us more energy, it’s the [seventh] player on the ice and I think it showed,” said Team Canada’s Captain Marie-Philip Poulin.

“Seeing the little girls in the stands, their big eyes open and maybe [we instill] that spark to dream, to [one day] be part of this team.”

The sixth and final game in a six-game exhibition series wrapped up in an exhilarating Olympic gold medal-like fashion as Canada claimed a 2-1 overtime victory with 27 seconds remaining.

The arena was packed, with many in attendance sporting the heavily favoured red-and-white jersey instead of the usual orange and blue.

Among the sea of fans stood many youthful admirers, wide-eyed and ready to cheer on their home team. They may be small in stature, but their voices are mighty, and together, Team Canada said they played a big part in their overtime victory.

“I take notice a lot, during the warmup on the ice, watching all the little girls and little guys that come up to the glass and cheer us on. It’s really nice to see all their posters and it’s just great that the parents are taking them out to sporting events to expose them to what they could become. 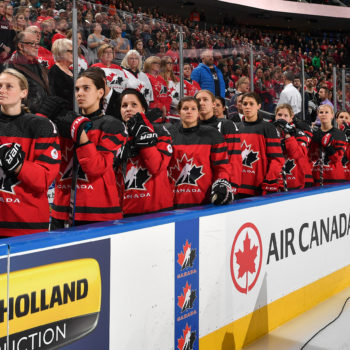 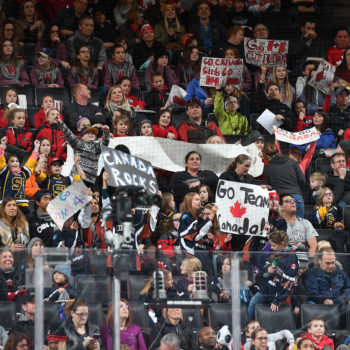 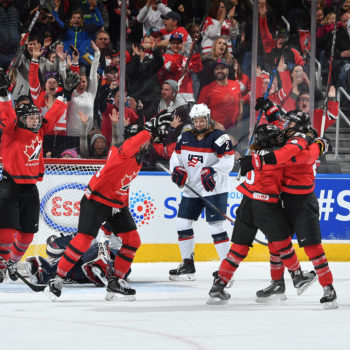 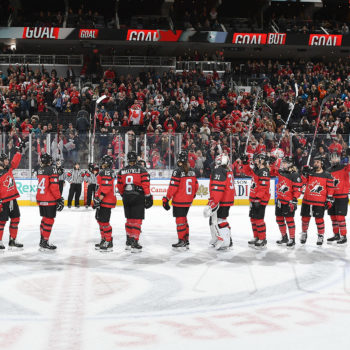 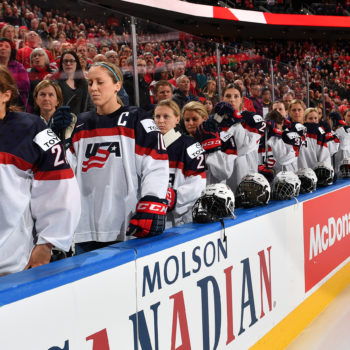 There is a great deal of respect that exists between these neighbouring countries.

Though their athletic warfare sets them on a collision course that almost always sees these two teams face-to-face in the finals, the passion and encouragement for the growth of girls and women’s hockey exceed their competitive nature.

“The crowds are great. Any promotion of women’s hockey is fantastic. And yes, they’re cheering against us, but the building’s electric and we feed off that energy just as much as the other team I’m sure. It’s exciting, I think it’s great for the sport and anytime we have an opportunity to play in front of 17,000 fans we’ll take it.

“Women’s hockey is going [up] in my opinion. Last showing at the Olympics and the Olympics before that, people love it, and that’s exciting…. I think it’s on the rise and it’ll only continue to go higher.”

The Bobby Orr of women’s hockey — as she was rightfully deemed after she scored the gold medal-winning goal in dramatic, air-born fashion (reminiscent of Orr’s 1969 Stanley Cup-winning goal) against the Americans in 1990 — is pleased to see the growth and achievement for girls and women who choose to pursue hockey as a passion and career.

“I think the biggest change is that there [are] a lot more girls playing hockey. When I was playing hockey, you would go into a rink and see one girl with long hair, with a ponytail, and go ‘Oh, there’s a girl playing,’” she said.

“Now, you go into rinks today and there [are] so many teams playing, so many girls are starting at the same age.”

Heaney appeared in 125 games with the National Team, recording 93 points (27G, 66A) from 1990-2002, and is the highest-scoring defenceman in Canada’s National Women’s Team history.

The 50-year-old has been dubbed a pioneer of women’s hockey in Canada, credited with aiding the growth of the sport.

“I always say it’s about timing,” she said when asked about her awe-inspiring history of the sport. “I think I’ve watched the game grow as I was growing into the game as well.”

As Team Canada gears up for the 2018 Olympic Winter Games, there is still a lot of work left to do said Head Coach Laura Schuler.

“There [are] things in our game that we need to continue to work on and improve as we go forward and that will be our focus for sure, but one thing about [Sunday night], the crowd was outstanding and I think our girls were able to feed off the energy of the crowd. It gave us some light there in the end.”

Since falling to Canada in overtime, 3-2, and earning a silver medal at the Sochi 2014 Olympic Winter Games, the U.S. Women’s National Team has played Canada in seven international events, winning six of seven titles and 11 of 14 games overall.

In turn, Canada will be looking to earn their fifth straight Olympic gold medal since first winning in Salt Lake City.