The sounds of excitement

As the countdown clock nears the 100-day mark for the Rogers Place Open House, RogersPlace.com caught up with Chief Project Development Officer of Oilers Entertainment Group, Bob Black, to get his take on this milestone.

“Over the next 100 days this building will change quite dramatically,” Black said, while standing at ice level inside Rogers Place. “We are just excited to see the rapid evolution of the building.”

Behind him, dozens of workers were focused on carefully assembling the new scoreboard, which nearly stretched the length of a nearby semi-truck.

Just how large is the #RogersPlace scoreboard? Check out the frame next to the semi in this @PCLConstruction photo! pic.twitter.com/3A6QbEQSoH

The sounds of hammering, sanding and trucks reversing are not just the sounds of hard work being put into building this world-class entertainment facility, but the sounds of excitement. The energy can already be felt inside the arena, as even the construction workers recognize how special this project truly is.

“We’re really confident that we have done something very special in terms of creating fan experiences that people will remember forever, [capturing] those I Remember Moments,” Black stated.

With the scoreboard being installed, the concrete poured and the seats being mounted, “the next stage in the process is really about the finishes coming into this building. We are seeing carpeting going in, millwork going in, glass panelling is everywhere,” Black explained.

“It’s really the finishes and technology [left to complete].”

Being a part of the Rogers Place project since talk of the new arena first began, Black cannot help but share his excitement as we begin to see the final touches being made inside the arena.

“I’m really excited about the east end of the building, with the five levels of clubs,” Black said with an infectious smile.

“We have theatre boxes, which are on a suite level. Then there’s a two-level Sportsnet club, and above that is a two-level Sky Lounge. This end of the building is not only going to be very unique architecturally, but there’s going to be a tremendous amount of energy.”

These two-level clubs will offer all-inclusive, premium food and in-seat service, and the Sky Lounge will turn into a post-game nightclub — acting as one of Edmonton’s most unique nightspots.

“We spent a lot of time in the design of this building to make sure it was much more than a hockey rink.”

The loge level is becoming one of the most anticipated hospitality products of Rogers Place, offering fans the chance to enjoy a game in a social setting, with a wide private concourse for easy access.

“It’s going to be one of the most popular locations in the building,” Black anticipates.

“In fact, it’s the largest loge level of any arena in North America.” 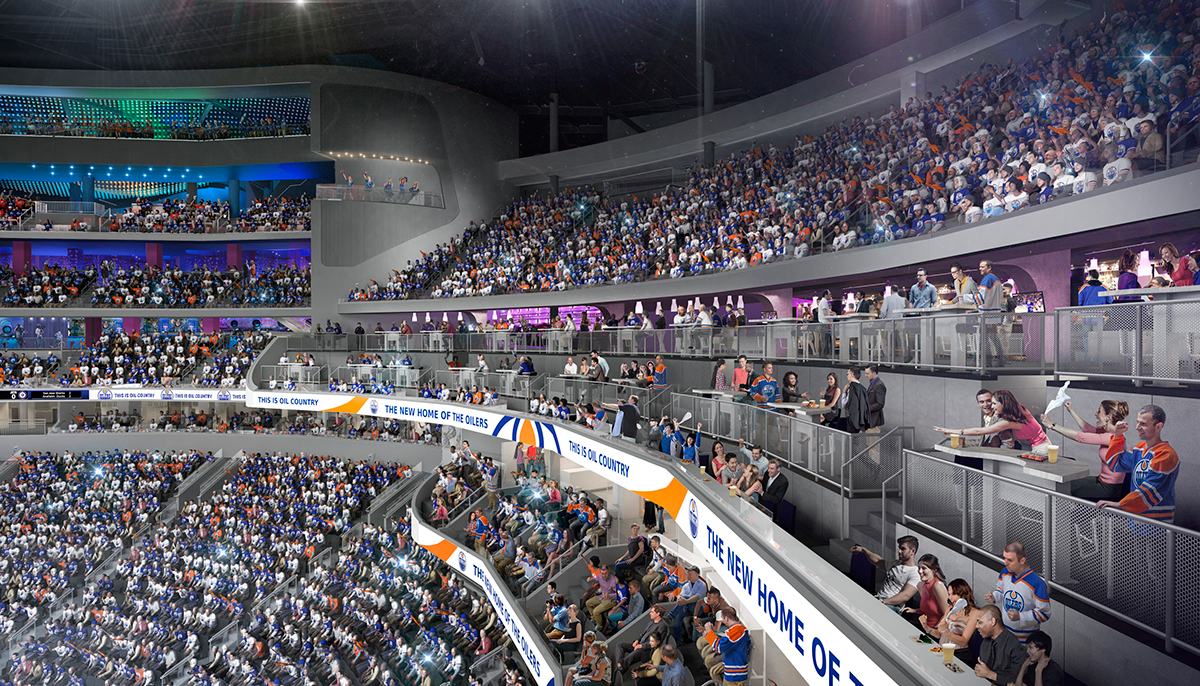 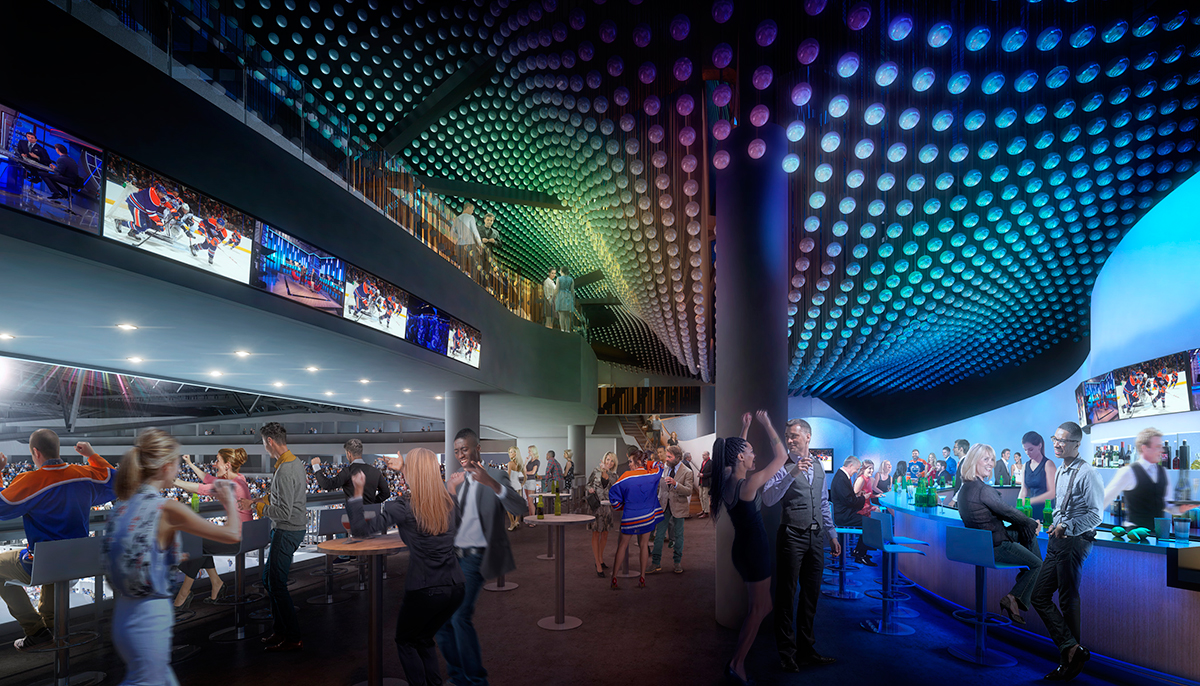 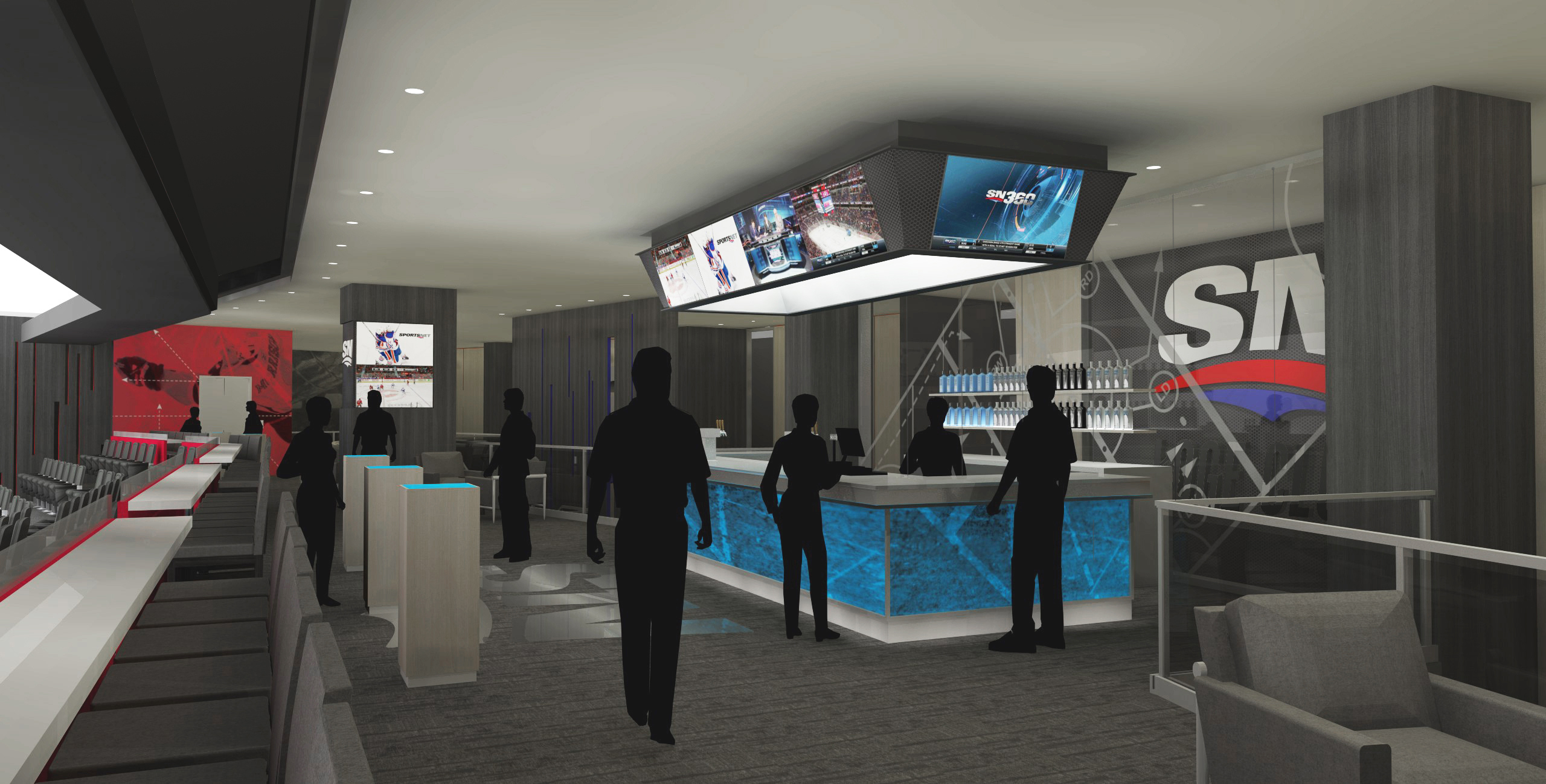 It is not just the hospitality products that will set Rogers Place apart from the rest, but also in the design of the building itself.

“We spent a lot of time in the design of this building to make sure it was much more than a hockey rink. We were very intent on ensuring this was a world-class entertainment facility.”

Capable of holding all types of concerts and events, catering to the highest standards both audibly and visually, Rogers Place looks to bring new vibrancy to the downtown core.

“There’s a lot of pieces in the history of the team that are important to preserve and to celebrate in the new building.”

Although the Oilers organization is excited for what the future holds at Rogers Place, they will continue to be mindful of the history of the team as they make the move into the new arena. One room in particular will house these memories— the media/interview room.

Not only will this room be used to conduct post-game interviews and host press conferences, “it’s also going to be a space that speaks to the history and heritage of this hockey team,” Black said.

“In essence, we’re going to have our own Hall of Fame in there that’s going to face out onto the street [on 104th Avenue]. There will be a number of things in that space that will celebrate the history of this hockey team.”

With 100 days nearing until the Open House, planning for the event is already underway.

“It’s going to be a really exciting day,” commented Black.

The Rogers Place Open House on Saturday, September 10 will give fans the opportunity to walk the concourses, see the “beautiful curves of the architecture,” and experience the integration of technology throughout the building, food and beverage options, premium spaces — such as the loge level — and more.

“It’s going to be a completely different experience. That day, people will really see what a great building this is.”