Wayne Gretzky and his family unveil the new home of the Gretzky statue.
Photo by: Andy Devlin / Edmonton Oilers

These were the words of Oilers Entertainment Group (OEG) CEO and Vice Chairman Bob Nicholson, following the official unveiling of the Gretzky Statue’s new home outside the Rogers Place Oilers Hall of Fame room on 104 Avenue.

Before Gretzky was joined by his family to help unveil the newly polished statue, OEG Vice Chairman, and former teammate, Kevin Lowe expressed his gratitude towards Gretzky’s contributions — both on and off the ice.

“The statue, like his time here, is truly iconic,” he said.

A prominent landmark for Oilers fans, the Gretzky Statue has been affectionately used for years by fans as a meeting point before games and for photo opportunities. The statue not only acts as a tribute to the history that has already been made by the Oilers, but its new location outside the futuristic-looking Rogers Place evokes a sense of excitement for the history that is still to come for the team and the organization.

Moving from its previous home outside Rexall Place earlier this summer, the statue returned to its birthplace at Studio West in Cochrane to be cleaned and polished before its move to Rogers Place. 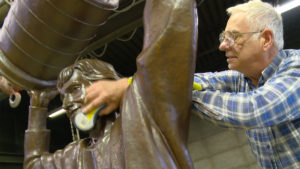 “We just want to make it look good and shined up for its new location,” said Don Begg, the bronzesmith behind the statue.

First erected at Northland Coliseum on August 27, 1989, the 950-pound bronze statue was funded by Molson Brewery and gifted to the City of Edmonton in honour of Wayne Gretzky.

“We wanted to make sure the public has access to it,” Nicholson commented on the statue’s new location outside Rogers Place.

Representing a fundamental piece of Oilers history, the Gretzky Statue rests at the end of the Oilers ‘Walk of Fame’ —  a stretch of sidewalk that starts at the corner of 104 Street and 104 Avenue and features larger-than-life graphics of legendary Oilers players on the exterior of Rogers Place.

Sheltered underneath Ford Hall with the Oilers Hall of Fame room as its backdrop, the Gretzky statue is once again marking itself as an iconic stop for Oilers fans to visit before cheering on their team at Rogers Place.

Next week on ICE Level, get an inside look at the Oilers Hall of Fame room!