On October 12, Oilers Entertainment Group (OEG) officially unveiled the Oilers Walk of Fame, the new resting place for the Wayne Gretzky Statue and the Oilers Hockey Hall of Fame room inside Rogers Place.

“We wanted to depict the past — of this great franchise — and the future,” Katz explained while walking along what will now be known as the Oilers Walk of Fame, the stretch of sidewalk that starts at the corner of 104 Street and 104 Avenue and ends at the Gretzky Statue.

Katz highlighted how the graphics displayed on the exterior of Rogers Place tells a story of the history of the organization and inspires those who see it for what is still to come.

The oversized graphics of historic Oilers players, such as Kevin Lowe and Wayne Gretzky, are encompassed by graphics symbolizing the future — with a scenic rendering of a complete ICE District to the West, ending with an image of Connor McDavid at the 2015 NHL Draft towards the East.

Following the Oilers Walk of Fame that runs underneath Ford Hall, fans will find the new home of the famed Wayne Gretzky Statue.

Moving from its previous home outside Rexall Place earlier this summer, the Gretzky Statue returned to Edmonton after a short visit to its birthplace at Studio West in Cochrane for a quick cleaning.

“We just want to make it look good and shined up for its new location,” said Don Begg, the bronzesmith behind the statue.

A prominent landmark for Oilers fans, the Gretzky Statue has been affectionately used for years by fans as a meeting point before games and for photo opportunities. The statue not only acts as a tribute to the history that has already been made by the Oilers, but its new location outside the futuristic-looking Rogers Place evokes a sense of excitement for the history that is still to come for the team and the organization.

Joined by his family, Wayne Gretzky himself unveiled the newly polished statue that is situated in front of the Oilers Hall of Fame room.

The first of its kind — somewhat of an extension of the Hockey Hall of Fame — the Oilers Hockey Hall of Fame room includes an exact replica of the ‘Legends Wall’ that’s displayed in Toronto, which features Glen Sathers, Wayne Gretzky, Jari Kurri, Grant Fuhr, Paul Coffey, Mark Messier and Glenn Anderson.

A locker room stall from the legacy team, as well as the legendary locker room door where players would bang their sticks and gloves before hitting the ice are also key features in the room.

Viewable from 104 Avenue, this room will not only pay tribute to the history that has shaped the Oilers, but it will also be used as a functional space for media avails and press conferences.

“It was actually Kevin Lowe’s idea that this could be a great piece of Rogers Place,” said OEG Chief Project Development Officer, Bob Black.  “The sound will be piped out outside onto 104th Ave for people to stand outside and listen to those pre- and post-game events and major media avails.”

The designer behind this multi-functional space, Terry Heard of Terry Heard Designers added, “The idea is that the fans can come and stand at the windows and have an audio feed and they can witness the interviews, or hear the interviews without having to come into the room.”

With more than 20 years’ worth of experience working on Hockey Hall of Fame projects, Heard is considered the best in the business by many (including Barrie Stafford) for designing this functional space. 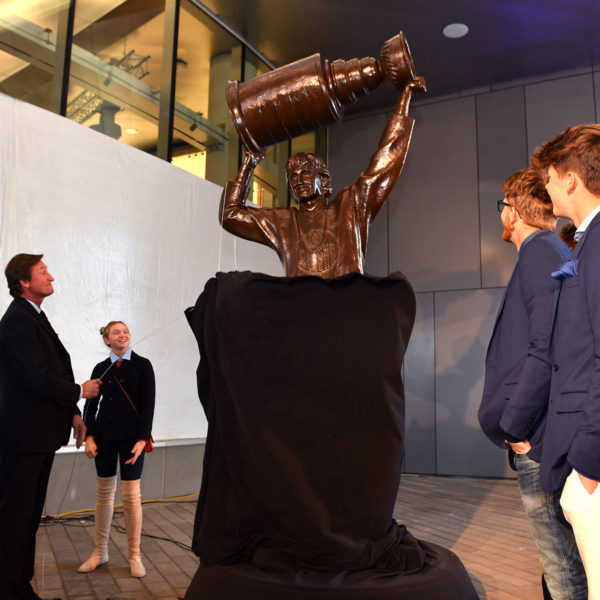 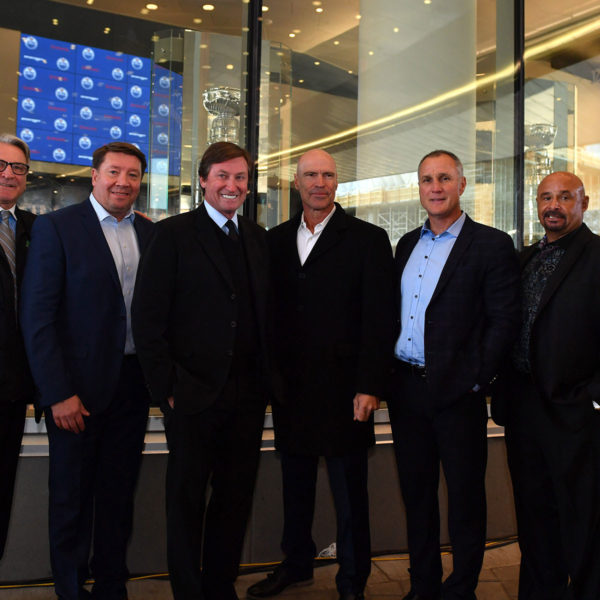 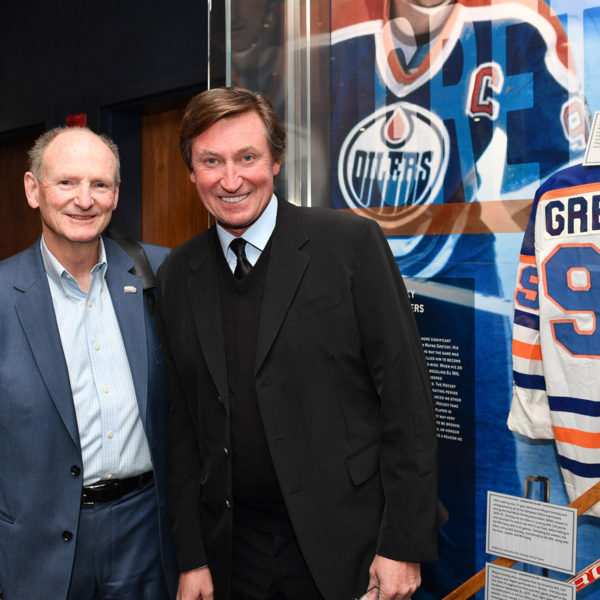 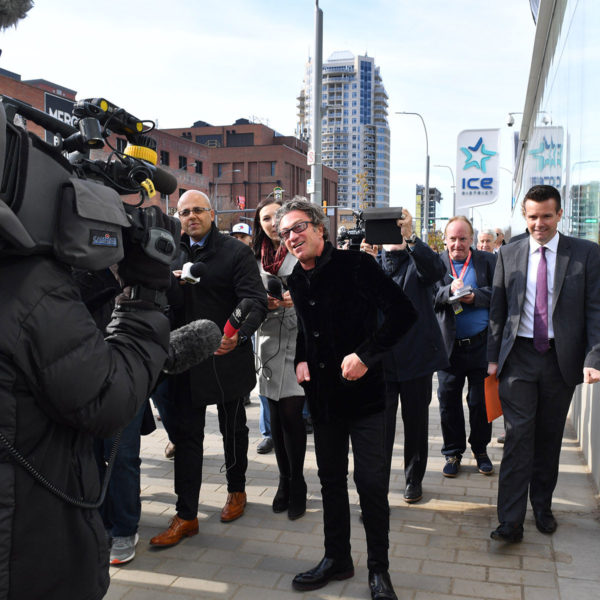 While Heard and his team were honed-in on designing the space itself, others set out to gather and assemble the memorabilia that would be displayed.

One of these individuals included Oilers Manager of Game-Used Inventory, Dwain Tomkow.

“We wanted to tell a story,” Tomkow explained.

Working with Tomkow, Scott Veber, Creative Director and Associate Curator with the Hockey Hall of Fame, echoed these thoughts, “[We first] think of the story we’re going to tell.”

That story is one that traces and celebrates the history and heritage of the Oilers hockey club — a story that begins with the Oilers’ seasons as a part of the World Hockey Association (WHA).

“It starts as the first bookmark of telling the jersey story,” said Tomkow.

Adding to the WHA history is a goalie stick used by Hall of Fame goaltender Jacques Plante during the 1974-75 season — an article enthusiastically loaned by OEG’s own, Bob Black.

“A great number of [artifacts] came from local collectors and Edmontonians. In fact, I’m proud to say I have three pieces in there myself,” he said, beaming.

His other two loaned artifacts include a Randy Gregg stick from the 1990 Stanley Cup championship that was signed by all of the players following the championship game and a jersey from the WHA’s last captain, Paul Shmyr.

“It creates an opportunity for people to loan [artifacts] to the Oilers Hall of Fame for public display,” he added. “I’m rather intrigued to what we might find.”

OEG welcomes those who feel they have memorabilia of historical significance to display and share with other fans inside the Oilers Hall of Fame room.

Besides those artifacts loaned by local fans and collectors, the Hockey Hall of Fame has graciously loaned countless artifacts considered imperative for telling the Oilers story.

“It’s been a really great collaboration with Hockey Hall of Fame to have [them] as a design partner and a curatorial partner,” said Black.

The former Flames forward laughed during a brief press conference held inside the room to announce the unveiling, “I seldom come to Oil Country and wear blue, but I thought it was only fitting to wear it for this great occasion.”

“This is a fabulous day for hockey and a wonderful day for Oilers,” he added.

Some of these pieces on display inside the room include Kevin Lowe’s home jersey from the 1979-80 season, — marking the club’s inaugural NHL season — Grant Fuhr’s 1981-82 rookie jersey, a pair of skates worn by Anderson during his stint as an Oiler, Ryan Smyth’s 2013-14 final game jersey, and the jersey worn by Connor McDavid during the last game at Rexall Place on April 6.

“[The display] traces the history of the Oilers back from the WHA all the way through the dynasty years and into the present,” Black said.

Another highlight inside the room includes the ‘Puck Wall,’ showcasing the original pucks from record-setting goals throughout Oilers.

To add to the day’s excitement, another big announcement was made by the Oilers — announcing Wayne Gretzky as OEG’s newest partner.

“Today we’re pleased to give a new home to one of Edmonton’s most iconic landmarks — the statue of the Great One, Wayne Gretzky,” Katz said.

“I’m even more pleased to announce to you all today that Wayne Gretzky will be officially rejoining the Edmonton Oilers family as a Partner and Vice Chairman of Oilers Entertainment Group.”

Gretzky commented, “I’m privileged and proud to be back as an Oiler.”

“Edmonton’s always been great to me. It’s a wonderful city. I’m thrilled to be back.”