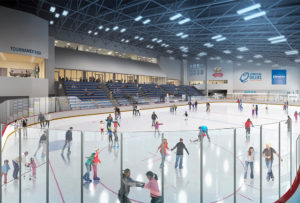 The northeast corner of Rogers Place is home to a new community gem – the Downtown Community Arena. Though it’s a smaller structure, it will have a mighty impact on the area.

Between 2001 and 2014, the population of Downtown more than doubled, from 6,170 to 13,148 residents, and it continues to grow. Add in the tens of thousands of people who work in the city’s core each day, and you have a huge concentration of people who can easily walk or take transit to enjoy some on-ice time.

As the City prepares to open the Downtown Community Arena this fall, the focus is on capitalizing on the arena’s central location by offering an enhanced level of programming.

“Though the arena features one sheet of ice, its level of public arena programming is equal to or more than twin or quad arena complexes found within City community recreation centres such as Clareview and Terwillegar,” said Brad Badger, Director of Program and Events within the City’s Community and Recreation Facilities branch.

Those who live and work Downtown can look forward to opportunities such as:

“The community arena is going to be a game-changer not only for the city, but for the community as well. We’re kind of on the edge of the inner core, but the arena brings opportunities for change and revitalization,” said Randy Shuttleworth, a resident of Queen Mary Park. “Once the arena lights turn on, there will be amazing opportunities for people in the area to enjoy hockey or skating in the community arena. And it’s not just a regular rink— it’s a world class facility! It’s very cool.”

The arena will be used by many groups, but the City has committed to ensuring that a minimum of 11 hours per week is dedicated to programs for people living in the neighbourhoods around the facility.

Another cool feature of the Downtown Community Arena is it will be the home rink for the MacEwan Griffins men’s and women’s hockey teams.

MacEwan University is contributing $3.5 million to the Downtown Community Arena for enhancements that are needed for their teams, including locker rooms and extra seating for spectators. This is a win-win as it was an affordable way for the university to have access to a new rink nearby without having to build a separate facility, and brings competitive hockey to the community to enjoy.

A practice space for Edmonton Oilers and Oil Kings

The Edmonton Oilers and Oil Kings and visiting teams will be renting the Downtown Community Arena as a practice space during their seasons.

Those who want to see their favorite players will be able to walk down to Rogers Place and take in the action from the pedestrian walkway that overlooks the Downtown Community Arena.

In recognition of Glen Sather’s contributions to Edmonton, both on and off the ice, the Edmonton Oilers Community Foundation (EOCF) and the Katz Family have contributed $1 million for the creation of a fund to support an additional level of new programming at the Downtown Community Arena that will serve the highest-needs residents in the community.

This fund will be jointly administered between the City of Edmonton and the Katz Group, and a committee will collaboratively plan and implement the programming for the Downtown Community Arena.