Rogers Place hosted its second hip-hop superstar in less than a month on Saturday night as Kanye West brought his Saint Pablo Tour to Edmonton.

The 39-year-old West is currently touring in promotion of his eighth studio album, The Life of Pablo. His performance included several tracks from the 2016 release, including the hits “Famous”, “Father Stretch My Hands” and “Fade”.

With no opening acts, the Rogers Place crowd was treated to two hours’ worth of the artist also known as Yeezy. Before the 21-time Grammy Award-winning rapper hit the stage, a mysterious mood was created in the bowl with low lights and fog, building anticipation for the show to begin.

Belting out tracks aboard his floating stage, West took the show into another gear early on with “Famous”, as he restarted the song three times until the capacity crowd was chanting and rapping along to a volume of his liking.

In addition to some patented West soliloquies, it was a barrage of hits from there on out as the artist performed some of his most crowd-pleasing, chart-topping tracks, including “Black Skinhead”, “Can’t Tell Me Nothing”, “Power”, “Jesus Walks”, “Flashing Lights” and “Heartless”.

Flashing lights was also an accurate depiction of West’s dynamic, airborne stage, which allowed him to get up close and personal with the entire crowd as it moved throughout the venue.

The ambience was further enhanced as the show reached its climax, with fog filling the entire floor for “Fade”, West’s most recent single. He closed the show with “Ultralight Beam”, sending the frenzied fans home exhilarated after an unforgettable performance. 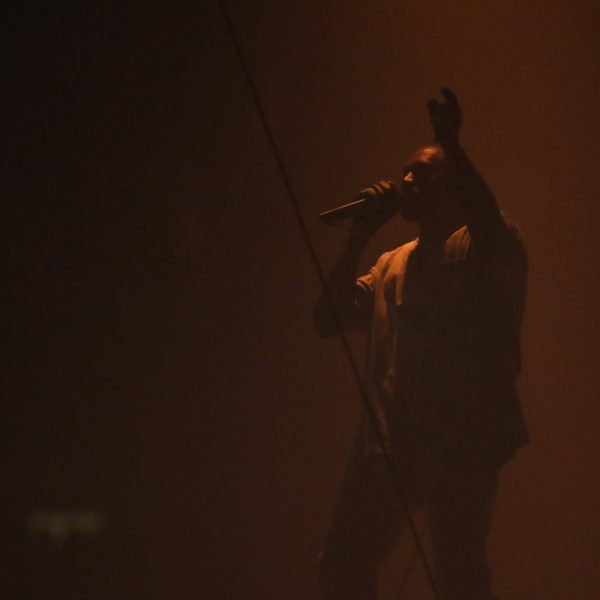