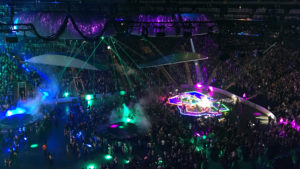 No words to describe how phenomenal you were tonight @RogersPlace I almost cried when you came onto the stage. Your are amazing @ladygaga
— Kayla (@kaylaelliott666) August 4, 2017

@ladygaga was sensational last night! #joanneworldtour #rogersplace #ladygaga #yeg. She is a force of love and energy. It takes so much talent to take a massive arena of people and make them each feel something emotional. ? #werealljoanne

i’m crying in the club

Whats goin’ on, on the floor? I love this record baby but I can’t see straight ? #LadyGaga #joanneworldtour #rogersplace #iseehersweat #floorseats #yeg

This is our: How many more tax payer dollars would it cost to install a 2nd escalator face? #rogersplace #ladygaga Also, happy anniversary, @puneeta00!