A Look Back: One year in Rogers Place

Just after 4:30 PM on September 3, 2016 I wheeled south towards the loading dock of Rogers Place for my first visit. It was a warm afternoon, but the cool winds certainly had a bite to them: a cursor of the long winter in front of us. Another Edmonton Oilers and Oil Kings hockey season was on the horizon, but this autumn was unique and special. Historic, even.

As I got closer to the door, a tree leaf skipped along the cement sidewalk. The leaf had been hardened through time, and its golden texture made a small scraping noise as it hopped up and down, back and forth. I made my way into Rogers Place and saw the leaf carelessly take flight across the street.

I never thought about that leaf again. And, frankly, why should I? It didn’t have any significance. But as I write this, attempting to merge the images, the sounds, the smells, the emotions and so many more things we’ve experienced in the last dozen months, and, more importantly, where we are headed, the leaf and its trajectory is especially profound.

We’ll get back to that in a few hundred words or so.

For anyone walking into Rogers Place for their first time, it’s overwhelming on several levels. The sheer size of the building is one thing, but the features, and their specific detail, have impressed countless guests and visitors from near and far. And to have such a shrine in downtown Edmonton has injected new civic pride not to be replicated.

Inside Rogers Place, inside the walls and throughout the levels, up and down concourses, in meeting rooms, and behind counters where that oh-so-special popcorn is concocted have been events that create moments. And they last lifetimes.

Where do we start? That Saturday morning, where close to 1,500 full and part-time Rogers Place staff sat in seats on the south side of the lower bowl and were educated on the standard of customer service that would be expected within Rogers Place, is a good start. Because that set the tone for every Rogers Place event to come. 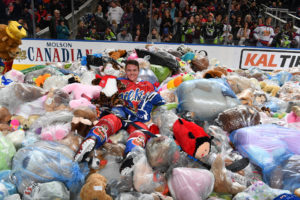 I will never forget the Oil Kings first practice on Rogers Place ice. From my vantage point in Section 101, the sound of skates chewing through the ice echoed throughout the building. Hearing pucks hitting sticks were a little crispier, and one could hear it.

What a pre-cursor for a hockey season.

The official opening on September 8, 2016 was a monumental evening as dignitaries crossed through the gates for the first time, while Daft Punk punctuated the sound system with “One More Time.” Perhaps that will become the adopted anthem for Oilers Entertainment Group (OEG) staff for decades to come when we arrive for work on the day of an event.

And who can forget the first Oilers game in Rogers Place on October 12, 2016? It began with an exciting announcement right before noon when Vice Chair and CEO Bob Nicholson welcomed Wayne Gretzky to the organization in his new role as Partner and Vice Chair. It was what the Oilers needed: they beat the Calgary Flames that night 7-4.

The Oilers playoff run was magical going to Game 7 of Round 2. And thanks to fans’ generosity, the Edmonton Oilers Community Foundation (EOCF) was able to make a significant investment to the Habitat for Humanity build in southeast Edmonton with funds generated from 50/50 games throughout the extended season. 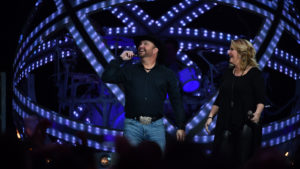 In December, Rogers Place experienced its first Oil Kings Teddy Bear Toss, where nearly 14,000 stuffed animals paraded onto the ice as players and staff watched on in awe. Fans excitement for their junior hockey team and its new home was on full display throughout the season with an unprecedented three sold-out games. And then there’s Garth. Country singer Garth Brooks and wife Trisha Yearwood dazzled crowds for a record nine sold-out shows in Edmonton this past February – with a banner hanging in the arena to prove it.

In addition to hosting sports and live entertainment, Rogers Place proved its culinary prowess when OEG hosted the annual Chamber of Commerce Ball. A cocktail reception was held on ice-level, dinner in Ford Hall and then dancing to Johnny Reid back in the bowl.

But like every home, it hasn’t always hosted joyous times.

Rogers Place was where we said good-bye to one of Edmonton’s favourite citizens who was living out his dream job as an Oilers Ambassador following his storied playing career. At 59, Dave Semenko left us far too early and his funeral was held in the arena in July.

Memory lane keeps stretching. It is hard to believe so much has transpired as we mark the first anniversary.

Here we are in the fall again. Hockey season is under a month away. World-class concerts are in the books. Countless new memories are waiting to be preciously crafted – by those same people who sat in the seats for their first time just over a year ago

The future of Rogers Place and Oilers Entertainment Group is heading up and gathering momentum to go freely into new territory…just like a golden leaf lifting off from the sidewalk.